So, let’s see how the series is developing now that Abe has Grace as a travel companion. 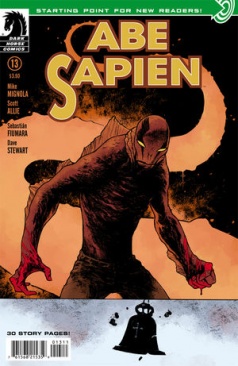 Haunted by guilt over the staggering death toll in Arizona, Abe vows to never let such horrors happen again—until a crazed healer and a frog-possessed teen block his path!

This issue contains two stories, The Healer, which continues the ongoing story of Abe Sapien since he left the B.P.R.D., and a reprint of Casualties, an eight-page flashback story that was originally released digitally in 2011 as part of Dark Horse’s Digital Retailer Exclusive program. It was also the first appearance of Agent Vaughn, who plays a pretty major role in the series now. Casualties is also collected in the trade B.P.R.D.: Being Human.

This issue claims to be a starting point for new readers, and at that it succeeds. Abe is meeting new people, and in several places this allows him to talk a little about his past as a B.P.R.D. agent and some of the stuff that has happened since he left, most notably the catastrophic events in Payson, and establishes clearly where Abe’s going. It functions both as a recap and shines some light on Abe’s feelings about those events. That said, I think reading the previous issue would be a good idea if only to make Grace’s character more sympathetic. Plus, #12 was the best issue of Abe Sapien ever.

The story itself is a moody one, full of the kind of imagery I love: mysterious darkness, freaky statues, a creepy ringing bell, plus there’s more shadows in the art than usual, so this one feels just a little more Mignola-ish.

I’m going to be a bit fussy here, but I did have some minor quibbles with the art in terms of visual storytelling. When we’re first introduced to one of the characters, he has a twisted arm, but after that initial appearance the arm is always at an angle where it can’t be seen properly, or at too great a distance to really see the deformity. It would have been nice to have at least another panel where the arm could be seen clearly. The was another panel which framed two lion statues, however they were not presented with a strong silhouette, shown from an angle that didn’t highlight the interest of them. It’s not a big deal, but it just seemed like a wasted opportunity to create atmosphere. I kind of wanted one of those moments that Mignola does so well, where he has a panel of some mysterious object, then cuts closer in the next panel on some detail of it.

And I really am nitpicking, because there were plenty of strong moments too. The abrasions on Grace’s hands, the ichthys symbol on the store building, the animal carcass growing egg-like embryos like Abe had previously seen in Payson… and especially Abe’s body language. Abe had to do a lot of talking in this issue, but it was the moments when he was silent and just acted that were most revealing about how he felt and what he was thinking. I like when characters don’t need to broadcast their thoughts.

OK, I’m going to start verging into spoiler territory now, so if you haven’t read the issue yet, jump to the end for my final verdict.

I did have a problem with the opening and ending, though admittedly this is a personal taste thing. I’m not a big fan of opening a story at the ending, teasing an audience, and then going “some time earlier” and then going to the real beginning. I find it’s an artificial way to create tension and it’s rarely done well. In order to work, it needs to have another reason to be there, and it has to be a really good reason. One of the biggest problems with this technique is that whatever ending the story has, it has to be better than whatever the reader imagines in that brief tease and most fall far short. I wish this story was one of the exceptions, but it wasn’t. The ending created in my head was a much more ferocious animal. The tease could have been cut with no loss to the story. And actually, I think it would have been better if it had.

Plus, if the tease had been cut, the ending would have had another page, and it really needed it. There’s some great stuff there, like Abe losing it and viciously beating the child-turned-monster to death, but there’s no breath at the end. I wanted to see Grace’s face when she saw what Abe had done. I wanted to see her make the choice to continue with Abe. I wanted to see Abe reacting to the people he had failed to save, if only it was in a glance. Or the lack of a glance, deliberately not looking.

Sebastián Fiumara more than does his job at making the healing statue look creepy, but he isn’t given the space to infuse the scene with atmosphere. With more breathing space, this could have been a really moody, creepy ending. And considering this issue had an extra eight pages, it seems a waste not to have given it two more.

That said though, I still enjoyed this issue. It was nice to hear Abe admit that perhaps the best way to investigate what’s happening to him would be to go to Rhode Island where it all began, but at the same time he’s making excuses not to. And he’s given up on the big fight now, and is focusing on just looking after Grace, but he’s not doing a very good job of that either. While Grace is weirded out by the sudden darkness, a healing statue, and a man that eats clay, Abe casually seems to think whatever happens he can handle it. But he’s not handling it, he’s just ignoring things until they go horribly, horribly wrong, and then reacting.

There was a beat in there where Grace had gone to sleep in the shack, and Abe was just sitting outside, not sleeping. It’s a small moment, but it’s the sort of moment that gives a real insight into where he is now. It’s not a huge thing, but it gives the story more weight to have moments like these.

This was a good issue. With a stronger ending, I would have given it an 8, but the abruptness of the it grabbed me by the scruff of the neck and and pulled me out of the story.