Brace yourself. I have a lot to say about this one. 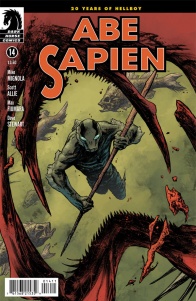 Abe tries to find out what’s haunting the young woman he’s traveling with, while his own past catches up to him. Abe goes underwater for answers, but a crazed witch claims to hold the answers they both need.

Remember how the last issue ended with Abe and Grace riding away in the darkness? This issue kicks off with a blood red sun rise, and it sets the tone for the story that follows perfectly. There has been a lot of character work bubbling beneath the surface of this comic for a while that I’ve been hoping would get addressed soon, and in this issue I got my wish and then some. It is packed. If you’ve been reading my past reviews, I’ve frequently been asking about Abe’s point of view, as we’ve watched Abe as a spectator, distanced from him. In this issue that wall comes crashing down, and… Well, I think you can guess, I loved the hell out of this comic. It had all the stuff I’ve been longing for and more.

And it’s not all just Abe. The stuff with Grace is just as powerful. She didn’t have much to do in the last issue except be afraid a lot. And that’s not a bad thing either. There were beats in that story that needed to be established for this one to resonate, things like having Abe standing guard outside while she’s sleeping, and refusing to talk to Abe about what had happened to her. She’s the catalyst for Abe’s own development because in many ways she’s mirroring his own dysfunctions.

Speaking of mirrors, I loved the way reflections were used in both Abe and Grace’s stories. For both of them, what lies in the mirror is something they can’t escape, but have to face. It’s a nice visual that had been established in the last issue, and I hope it will continue to evolve as the series goes forward. It’s especially cool on page two when Grace and Abe are gathering supplies, and Grace won’t allow herself to turn and look at the mirror along the wall. Then Abe looks at his own reflection, distorted in the cracks, and that look says more than words ever could. Meanwhile Grace grabs some shaving cream and razors as a way to hide from that reflection. There was so much going on in that short scene, only a little over a page long. And the stuff on that page hangs over the rest of the issue. I’ve got to say, the economy in the story telling there was excellent.

A little further into the book is an old lady that talks a little about “sacred places.” This is something this series does a lot. They meet someone on the road and the person tells them what’s been going on in these parts. But in the past it’s usually been stuff we already know as readers, or stuff that’s so specific to that area, it’s not going to mean much beyond the current story. This time though, this old lady says something that’s going to be very important. I’m not going to say what it is, and if you’re new to the series this moment probably won’t mean very much other than to be a bit intriguing, but to long-term Mignolaverse readers, this moment is setting up something that you know is going to be a freakin’ huge deal in the future. I don’t know what it means, but there’s certain iconography there that connects to the very foundations of this universe. So, you know, that’s cool. I’m really looking forward to seeing where that goes.

The next sequence is really… genuine. It’s a nice bit of character interaction between Abe and Grace. And here, I have to praise Max Fiumara, because this guy gets that emotions are more than just faces. He draws incredibly expressive hands. There’s a shot with Grace and her child in there, and I love seeing that little hand clasped in her mother’s, the other placed protectively over it. I liked that when Abe touches Grace’s scalp, he only uses the tips of his fingers. There’s hesitancy there. Grace’s arms remain crossed throughout the scene, showing how fragile she is, while also physically showing she has put a wall up around herself. Her body language is echoing the attitude in her dialog. And when Grace is really in pain, the panels are always composed so that they hide her face. Her pain is private. Dave Stewart is also using this sequence to call back color palettes he established in issue 12 with Grace’s flashbacks, dreams, and her isolation while imprisoned in a dark room in the house. There’s a reason Grace is in silhouette as she approaches the lake to see her reflection, surrounded by the same blues she was surrounded by when she was being kept prisoner. And I loved that the last panel on page nine was Grace’s empty hand as she exits the frame. It’s extremely subtle, but this visual motif is really working for me.

Holy crap. I’m only up to page nine! Yep, I loved this issue. And it only gets better.

As Abe goes swimming, the barrier between him and the reader comes down. You want to know what’s going on with this guy? It’s here. It reminds me of a similar sequence in Abe Sapien: The New Race of Man. When Abe goes swimming, he seems to open up to the reader, I guess. This is followed by a great bit of comedy and weirdness, that remarkably doesn’t break the mood, but actually deepens it. I got a good laugh in there. It’s the breath before the plunge, because the next seven pages are incredibly dark.

I’m torn, because I want to talk about these pages so much, but I can’t do them any sort of justice, and I don’t want to spoil it. There are visual cues that link back to Hollow Earth, Plague of Frogs, The Black Goddess, King of Fear, The Dead, Wake the Devil, Garden of Souls, Seed of Destruction (that one’s very subtle), and probably others I haven’t discovered yet.

And the stuff with Grace is freaky as hell. Just look at the pattern on Grace’s sister’s dress while they talk. That is messed up and awesome, but best of all, it’s all about character. This issue is completely character driven in every panel on every page.

In my review for issue 12, I mentioned how much I loved the cover. In this one, that cover is called back in a very powerful panel. Hell, on page 19 there’s a clever callback to the cover of Abe Sapien #5. This is an issue that’s great on the first read, but even better on the second. There’s so much subtle stuff going on with the visuals, you’ll keep finding new things to appreciate. The story telling in the dialog, the illustration, and the color are tightly woven, creating something better than the sum of its parts. The creative team is in fantastic synchronicity here. My only complaint is that I have to wait two months to find out what happens next, since issue 15 is going to be a flashback story. (However, that flashback story involves a certain homunculus, so “complaint” is probably a very poor choice of words…)

Pick up this issue. If you’re new to the series, pick up 12 and 13 while you’re at it, otherwise this could be tricky to understand. For long term readers, this issue is going to blow you away. This issue does what comics do best. It tells the story in the most visually engaging way possible.