This “Abe Sapien” jumps back to the “Plague of Frogs” era in a one-shot drawn by “Colder” artist Juan Ferreyra. And it’s a bottle episode! 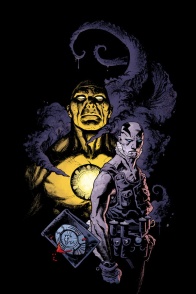 Before the Black Flame, “Hell on Earth,” and the death of Roger, Abe faces a creature that threatens to drain the soul from anyone it comes in contact with. The B.P.R.D. have fought for mankind for years—and it’s their own humanity that’s at stake this time.

For long term Mignolaverse readers, I can tell you all you need to know about this issue in a single sentence: This issue would fit comfortably alongside the other chapters of “B.P.R.D.: War on Frogs.” That’s it. That book had a Daimio story, a Roger story, a Johann story, one with some regular B.P.R.D. grunts, and one with Liz Sherman and Ashley Strode… but there was never an Abe story. So that’s what this issue feels like. It’s the missing piece, and it fits very nicely.

And despite being a flashback story, it manages to build on themes that were explored in the previous issue, adding to the ongoing “Abe Sapien” story as it explores another period of Abe’s life when he was going through an identity crisis. The supporting cast in this one has been carefully selected too. Vaughn because we haven’t seen him in a while and it’s nice to have a reminder that he exists, while also giving him a few moments to show his mettle. And Roger and Ashley Strode, characters that reflect aspects of Abe’s inner conflicts both in this flashback and in the present. (And as someone that’s impatient for another Ash story, it was nice to see her again.)

Of course, the one everyone’s really excited to see again is Roger. And yeah, it is good to see him, but it’s not the Roger I remember. He’s different. Some would say he’s out of character. I’d argue the opposite, and that’s precisely the point. This story is set only a few months prior to Roger’s death, at a time in his life when he was becoming more and more like Captain Daimio. So this is a more gung-ho Roger, and a pushier Roger. And I liked seeing Abe’s reaction to this. It’s clear he’s not happy with the way Roger’s changing.

There’s a particular panel when he’s talking aggressively at Abe that reminded me of a panel in “B.P.R.D.: The Dead” when Daimio and Liz were fighting. It’s unnerving to see Roger wearing Daimio’s expressions. 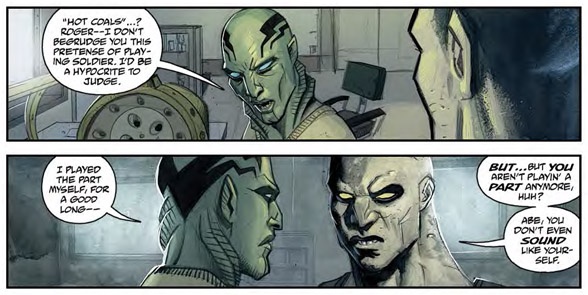 I get the feeling this is not the Roger some fans want to see, but this is really about Abe, and this is the point of Roger’s life when his characters conflicts have the most overlap with Abe’s present day conflicts. John Arcudi has spoken before about how Roger’s voice is hard to nail down because of his shifting personality, and I think a key to it is acknowledging that it is a shifting voice, which Scott Allie does here. This portrayal feels right to me.

But let’s put the character stuff aside for a moment. This issue also boasts one of the more messed-up sequences in the Hellboy universe. If you’re familiar with Juan Ferreyra’s work on “Colder,” that should give you some idea what you’re in for. This was clearly an issue that had to hit certain beats a certain way. It was either written with Ferreyra in mind or they chose the perfect artist for the material. Just thinking about some of that stuff makes my skin crawl.

OK, talking around spoilers is getting too difficult. Skip to the end for my verdict if you wish to remain unspoiled.

Honestly, my first thought after finishing this were wondering how on earth Vaughn survived this without even being brain damaged. When Roger yanked that creature away, I’d think ripping all those tentacles out of a person’s head would kill them. I just kind of wanted the story to acknowledge the physical trauma Vaughn had been through, not just the emotional. If he had been lying on the ground, unable to move at the end of the issue, I would have bought into it a little more. That way I could imagine he went through a rehabilitation period between this story and “The Pickens County Horror.”

And I can’t believe Vaughn stayed with the Bureau after this. I mean, we’ve seen bad things happen to him before, and frequently to his fellow agents (poor Agent Peters), but this is by far the worst… Well, I guess it ties for first along with being killed and resurrected as Strobl’s slave. I mean, he’s clearly a mess after this, but by “The Pickens County Horror” he’s still an agent and still doing what needs to be done without panicking. The guy can handle some truly nasty punishment.

So, obviously there has to be a dedicated Vaughn issue of “Abe Sapien” some time, right? C’mon, he’s totally earned it.

As for Roger, while he may be acting like Daimio, he’s still under there, doing his usual thing of collecting trinkets that catch his eye. That was a nice moment of glimpsing the Roger I remember. I suspect we’ll probably see that little amulet again or perhaps that cult in New Mexico. Abe isn’t too far from Velarde in the present day issues after all. And maybe they’ll bring back more tentacled monstrosities.

I liked this issue. It stands alone well enough for new readers, but it also explores Abe in a way that’s relevant to the ongoing story. I enjoyed seeing familiar faces again, and seeing new sides to them. Plus there was also a healthy dose of action and nightmare-inducing horror. All this from an issue that takes place almost completely in a single room.