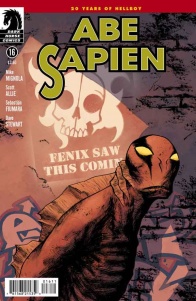 Abe returns to the place where Fenix shot him, and things get worse when a mysterious gas begins to leak from the ground. Pursued by a crew sent to bring him down, he runs into two different apocalypse cults, one of which worships Abe!

For a while now, each arc of Abe Sapien has essentially been a stand alone story, each exploring a world gone to hell and the people surviving in it. Abe himself has flitted from place to place, trying to help where he can, but instead he’s only found failure after failure, or at best a partial success at a terrible cost. We’ve seen him convincing himself that he’s looking for answers, but he hasn’t been looking very hard, or even in the most obvious places.

Until now. This latest arc, “Sacred Places,” has Abe returning to Rosario, the town where he was shot by the teenage psychic, Fenix. FINALLY. This is the arc I’ve been waiting for since the Abe Sapien series kicked off as an ongoing, and since it was teased on the final page of “To the Last Man” back in March, I’ve picked up each new issue with the hope that Abe would be in Rosario.

One of the strengths this issue has, is the way it can draw from “B.P.R.D. Hell on Earth: Gods.” I love that arc. It first introduced Fenix, her followers, and that graffiti, “Fenix saw this coming.” Those elements give Rosario a very different feel to the other places Abe has visited. It’s at once both alien and familiar, setting a stage for… well, I’m not sure what yet, but it certainly feels important. Sebastián Fiumara has taken the location and pushed it further, with the graffiti spreading everywhere.

It’s not just familiar locations popping up either. Gene, from “Abe Sapien: The New Race of Man” and “B.P.R.D. Hell on Earth: Lake of Fire,” makes a return. When we last saw him in the pages of Abe Sapien he had mutilated the corpse of a friend that had killed himself. He’d done this just so that people would think nonbelievers of the new world order were punished. So if he’s around, I think it’s pretty safe to say there’s probably something not good going on.

The B.P.R.D. finally makes contact with Abe this issue in the form of Agent Stazz Hansen and her colleague Agent Callas (I guess Carla couldn’t send Liz or Johann or go herself. Still, I think Liz would’ve had a real shot in getting Abe home). This meeting forced Abe to confront this idea he has in his head that the Bureau thinks he’s the enemy, an idea planted in his head by Panya. It’s another step towards him being honest about why he’s really not going back.

OK, I’m going to start talking about some spoilery stuff now. Nothing too major, but you may want to skip ahead if you haven’t read it yet.

So the first half of this issue seemed to go pretty smoothly, but the second half was a bit rockier. It introduces a bunch of new characters, and proceeded to have them carry various bits of exposition, some better than others. There are some sections in there that feel like they are being said purely for the reader’s benefit, and don’t seem to be things strangers would naturally discuss in front of Abe, Grace, and a pair of B.P.R.D. agents, especially when there are other matters they should be addressing to first. I feel like one of the speaking parts could have been cut, their lines given to another character, to make this smoother too. The added exposition of introducing five characters was an extra burden the scene didn’t need.

Then there are other elements where I was pulled out of the story by the characters’ lack of reactions to certain beats in the story. When the character Dayana is introduced, she emerges from behind a black door with a skull on it, at first even appearing to be Death for a moment. And then the main characters let her heal one of their own. Dayana doesn’t look like a doctor, but no one questions this, they just go along with it. They don’t even ask what she intends to do, despite the evidence that these people they just met might be part of a cult. Dayana’s appearance in the story was a nice visual, but it put me at odds with the main characters’ point of view. I personally feel with character introductions you are never just introducing a character, but you are introducing the way your viewpoint characters view them.

And it’s odd that the first thing Abe says after seeing Dayana is essentially, “Oh, I’ll carry this injured guy down into your strange basement behind your skull-door.” It doesn’t have to go the other way, where he immediately doesn’t trust her, but it would have been better if he’d at least had a few questions. Even more odd, only a page later, the characters talk about Dayana’s mysterious ability to bring people back from the brink of the red mist’s effects, which would have been a great way to convince the character’s of Dayana’s skills as a healer while introducing a crucial bit of exposition in a more natural way. This also would have been an opportunity to introduce the personalities of Tuck and Jimmy. Given what they’d been through, they could have injected some real feeling into the moment.

Abe had been told by Panya when he first awoke in B.P.R.D. headquarters that Hellboy was dead, something he had dismissed at the time as impossible. Again in “To the Last Man” Abe was told Hellboy was dead. His reply? “Don’t believe everything you hear.” Then in “Visions, Dreams, and Fishin'” Abe had a vision of Hellboy… 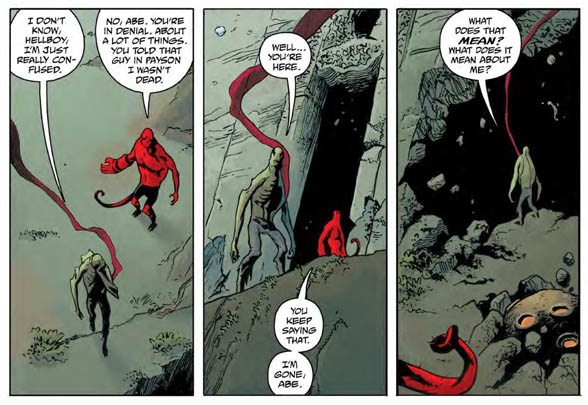 Hellboy’s death has been on Abe’s mind for a while, and the moment with Stazz wasn’t enough, especially after all this time. It just felt tacked on.

The stuff that worked was with Abe and Grace. That relationship is the core of the book at the moment, but it’s my hope that the characters introduced in this story will fill out the cast a bit. Abe and Grace need other relationships to challenge them.

So, this one was a bit off for me. Plot wise, it’s moving forward and working, but I felt let down in the character department, and the exposition could have used a lighter touch. There’s some intriguing mysteries here though, and the atmosphere is very well handled. What’s there is good, but it’s a bit cluttered.