Abe begins to delve into his past… 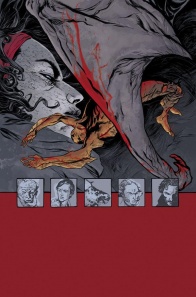 In a strangely tranquil town on the Texas Gulf Coast, Abe has found a little peace. That peace is threatened by Abe’s hunch that there’s a connection between this town and a deadly threat he faced not too long ago…

This issue went by way too fast. I reached the cliffhanger at the end and I wanted more straight away. So that’s a good sign. There’s been a few elements that have been content to be in the background for a while that step to the foreground here, in particular the character Eliot. In my last review I didn’t even know who Eliot was until I did a bit of poking around in the previous arc. He was just a guy framed in such a way that he seemed important, but I didn’t know why, with a certain expression on his face that I couldn’t place.

What was going on there makes a lot more sense now, and this issue made up for the last’s shortcomings by making sure readers know exactly who he is right from page one. He’s Eliot. He’s the guy that suggested everyone come to Burnham. And he’s a tool (it says so on his t-shirt). Last issue was Grace’s issue, and this one is supposed to be Dayana’s, but it kind of feels like she shares this one with Eliot. He was so much in the background, he was practically a non-entity, and here he comes to life. Now we know who he is, and I enjoyed discovering that.

I also enjoyed Abe poking and prodding at his past a bit. He doesn’t learn anything new really, but we as readers do, because we never knew how much about Langdon Caul’s last voyage that Abe had previously learned. More importantly, he seems to actually be looking at his past to find his way forward, something I’ve wanted for a while, but he’s been resistant to doing. He still hasn’t properly taken the plunge, but he’s certainly getting there. His excuses are being eroded away rather quickly now.

Dayana herself continues to be a mystery, and one that Abe isn’t looking at too closely. But he had a long career in the B.P.R.D., so I assume he’s come across people like Dayana before. He certainly doesn’t seem troubled by her, even though she has demonstrated in the past, and again in this issue, that her powers are not to be trifled with. 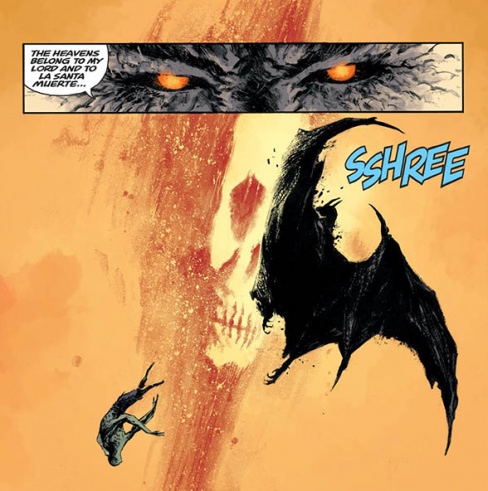 Most of this issue is a series of discussions, and while the sequence with Grace is hitting very familiar notes, the others pull out new elements from the characters, especially Abe and Eliot. There’s a scene in the middle of the book with Abe and Dayana talking, and little else is going on, but it was one of my favourite parts of the story. A big part of this is the choice of visuals, especially the blood in the tea cup as it swirls around into a ghastly image of Abe. These conversations could be very dry without these elements to turn Abe’s fears into a visual acting as a kind of third party to the conversation.

And now I’m going to talk spoilers, so skip to the end if you wish to remain ignorant of the plot to unfold.

I was not expecting Gene to die, and I must admit I’m a little torn about it. On one hand, it seems too soon. He started off as such a selfish jackass, but over the course of the last arc and this one, he really changed himself. I was looking forward to seeing him evolve further. This series rests so heavily on Abe, it’s nice to have other characters around that have been around longer than the current arc.

On the other hand, someone had to die, and with Gene it wasn’t just some background guy, so it’s all the more nasty. Especially when Sebastián goes to a close-up on his dead face. It makes Eliot’s betrayal all the more disgusting and his guilt that much more palpable.

The discussion in the mirror raises a question though… What the hell is Mr. Arbogast? Sure, most of him is obscured by Eliot, but the thing talking back to him in the reflection certainly didn’t look human. And given that Arbogast was talking through mirrors and windows in the last issue, not to mention killing those that serve him when he doesn’t need them anymore, I’m pretty sure that creature is him. And the creature is probably a demon.

Which begs the other question, what does a demon that spends its time raising the dead want with Dayana? She worships la Santa Muerte, and her powers seem to stem from death… although given the extent of her power, I’m beginning to think she may actually be la Santa Muerte. We’ll have to wait and see.

This issue is still dealing with the “settling in” period as everyone gets used to Burnham, but it handles it much better than the last issue. Admittedly, it’s talk-heavy, but the conversations are compelling. There’s one right in the middle that’s several pages long and it flew by.

Near the end there’s an action sequence that ended with a moment that would have made for an excellent cliffhanger, but the next scene took it further and added a quieter moment that works even better. Things had gotten so interesting by the end… And now I have to impatiently await the next issue.

And check back in tomorrow as the first Hell Notes for the year goes up, plus something extra special for Abe Sapien readers…