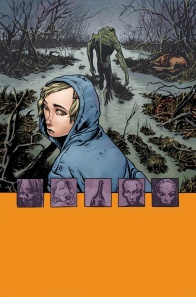 A little girl taking shelter from the end of the world with a mysterious Mexican death cult turns to Abe for protection.

Last month’s issue revealed that one of Dayana’s followers, Eliot, had not been entirely trustworthy. In fact, he had been sent to infiltrate their group and bring Dayana to Burnham, something that he wasn’t exactly proud of. No, more than that, Eliot was being consumed by his guilt for betraying those that had placed their faith in him. In the final pages, Eliot was confronted by some kind of creature looking back at him from a mirror… Mr. Arbogast or something else? Either way, it ended with Eliot cutting his own throat.

Eliot’s wasn’t the only death though. Gene was attacked by some kind of monster. And of course, then there’s the zombies Mr. Arbogast is brewing… I honestly thought things had reached boiling point, so I was primed for a shift in pace as things really started to go nuts…

…and that’s not at all what this issue is. It’s a slow and ponderous issue. Definitely not what I was expecting. It takes all the momentum built up in the previous issue and sets it aside to instead focus on Megan, a young girl growing up in a world that’s coming to an end. However, I didn’t mind the detour from the main plot. Megan’s point of view is so unlike the adults in the series, it was nice to hear a different voice.

You may not have noticed Megan much, but she’s actually been around since “Abe Sapien” #16 (the first part of the “Sacred Places” arc when Abe and Grace came to Rosario). Honestly, it’s kind of a shame she and Abe hadn’t interacted more in earlier issues, because Megan doesn’t look at Abe like the others, and that is genuinely refreshing. Plus she’s got that frankness that only a kid can pull off.

It’s funny. I’ve been waiting for Grace to shake up Abe a bit, but that still hasn’t happened. I thought Dayana might, but last issue she turned out to be quite mild in her dealings with him. It’s Megan that seems to be the best at getting to the point. She calls things the way she sees them, and she says things candidly that Abe won’t admit to himself. There’s something very satisfying about having Abe say, “It’s all right to be afraid,” only to have Megan essentially reply, “I’m not afraid. You are.”

But make no mistake, this is a very talk-heavy issue. Things are still stewing beneath the surface, but the overarching plot only moves forward a little. The main focus is on Abe trying to help Megan deal with a tragedy, only to find she’s dealing with it better than most, and helps him deal with a few things instead.

This puts a lot onto Max Fiumara. He had a lot of dialog to carry, and had to find ways to keep the story visually engaging. A few touches go a long way, such as Megan giving Abe a meaningful look and pointing to her eye in a way that silently says, “Hey Abe, what’s up with that guy’s eye?” Most of his efforts though go into a kind of scenic tour of Burnham, which does a lot to make it feel like a real place. If I didn’t know the town was fictional, I would have assumed this was a careful portrait of a real one. I don’t mean this in the sense of the panels looking like direct translations of photos. There’s certainly still a heightened reality to Burnham. Somehow Max Fiumara has captured a tone that feels real, but without being slavish to reality either. This definitely works in the story’s favour, and it helps echo the feeling of Payson arc in “Abe Sapien” #9-11.

Knowing what happened in Payson, and knowing the same thing is bubbling beneath the surface here, this very much feels like setting the stage, although I kind of wish more of this had found its way into the first issue when we were being introduced to Burnham. Which gets to my difficulty with this issue. I like it, but it’s a strange pace for the middle of five-issue arc. It’s actually slower and more ponderous than the first. Aside from the sequences back at the house dealing with the death of Gene and Eliot, it feels like a first or second issue really. We’ll see. Maybe the pacing will make more sense to me when the arc is complete.

Spoilers for the latter half of the issue from here. Skip to the final paragraph if you wish to avoid them.

Speaking of back at the house, the main plot did make one particular move forward as the entity that lured Dayana to Burnham revealed its presense and goaded Dayana and the visiting priest. This was the most intense moment in the issue, strikingly different from everything else around it, but it plays out just as you’d expect it would. I wish this story accent had added a little more, only because it feels like it’s just turning up the intensity back to where it was when the last issue finished.

Funnily enough, the final scene with Megan reading Abe’s cards did more for me. It’s very simple, and it plays much like these card reading sequences usually do, but there’s something about Megan doing this for the first time without Dayana that made it more interesting, especially when she keeps talking about what she feels each card is saying with such conviction. The kid’s got talent. The thing is, as readers we’ve known about the connection between Payson and Burnham since the first part of this arc, so Megan’s cryptic talk about a fight Abe walked away from that he can make right makes immediate sense… Which is actually kind of a shame.

Seeing this scene, I can’t help thinking how very different it would have played if we didn’t know about the zombies. If we hadn’t seen any scenes with Mr. Arbogast and Tony, if we hadn’t seen the open graves in the first issue, if we had completely focused on Dayana’s people, then imagine how fantastic that final page would have become. Those zombies moving towards them on the final page would have been a reveal, not just a tease for big action to come, and with it everything that Megan had just said during her card reading would have clicked into place. It would have taken what’s already there and heightened it.

So this is where I find myself. I liked the issue. I really liked Megan. I wish we’d seen more of her sooner. But the pacing threw me a bit, and there are some things that could have been played tighter and punchier.