Zombies! The zombies are back! 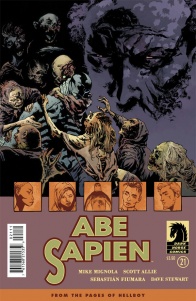 The villain takes center stage as south Texas’s necromancy problem is revealed, and Sebastián Fiumara gives Geof Darrow a run for his money.

Last week “The Shaolin Cowboy: Shemp Buffet” came out. I mention this because the Shaolin Cowboy actually shows up in this issue, and I love little Easter eggs, so I had to share it at once.

OK, on to the review… I think Sebastián Fiumara had a lot of fun drawing this. The moment zombies start wandering the pages, he cuts loose and does some fantastic work. This arc has had a lot of talking so far, but I get the feeling he was itching to draw something like this, because he throws everything into it. Those dialog sequences have somewhat tame panel composition, so when the zombies come out and the panels get that “wide angle lens” look with low angles and the horizon always on a diagonal, the book’s mood changes in an instant. This isn’t just to make an action sequence “dynamic.” Everything went from calm to completely out of control in a few seconds, and these compositions get into that headspace immediately.

Now we’ve seen Sebastián doing action scenes throughout the “Abe Sapien” series, and in the last arc he even had a similar-ish moment with Abe fighting a horde of mutants, but we haven’t seen him do action like this before. There’s a real emphasis here on not just framing the action, but getting a feel for the pose, both in the emotional context and general momentum. It’s great to see Abe fighting with desperation on his face, but also in his pose, in the composition of the panel itself, while simultaneously showcasing his physical power. There’s an energy that I haven’t seen at this level before in Sebastián’s work and I love it.

Story-wise this one is pretty light though. The later half is an action sequence, but even in the first half there isn’t much there. And this is where I had some problems with the issue. This is Mr. Arbogast’s issue, the villain’s issue. He’s a character we know very little about aside from a few teasing sequences in the earlier issues, so I was looking forward to digging deeper with him. And that’s where I was let down. Essentially the first half revisits the previous glimpses of Arbogast and extends them, capping it all with an instigating event that sets the second half of the issue in motion.

For an already slow-moving series to revisit earlier events again, it slowed the issue down even more, and I didn’t get much out of it that I didn’t already have from the scenes with Arbogast in previous issues. Knowing this issue was the Arbogast issue, and knowing so little about him, I expected some insights, another point of view, something more personal. Instead it’s very much a fly-on-the-wall perspective, just as the previous scenes with him have been. The only scene that adds anything really new is the instigating scene that shows how the zombies were unleashed on the town.

The idea of this being the villain’s issue was one that intrigued me and excited me, but the final execution didn’t live up to those expectations. The pertinent information could have been reduced to a single scene, a cutaway sequence like all his scenes in previous issues, and instead focused on someone else, someone the story could get personal with and explore on a deeper level. In this issue we watch Arbogast’s story unfold, but we don’t experience it with him like we did with Grace in issue one or Megan in issue three. Especially since the last half is all action, it makes the first half seem even more slight by comparison. It needed to be meatier.

Furthermore, the scenes with Arbogast are all set before the final moments of issue three, over a span of two days, so it felt like a lot of page real estate was wasted establishing time and place for moments that didn’t add much to the story. Back in the second issue of this arc there was a scene with Mr. Arbogast and Tony talking while mixing up some stuff. It was a dialog-focused scene, with little happening aside from Tony coughing a bit when he inhales some green powder. For readers, that was two months ago, and a talking sequence isn’t exactly the sort of moment thing to stick in the reader’s mind for two months unless there’s some sort of dramatic turn involved. The result is a relatively forgettable scene is revisited and then extended. I’m not sure why either. The scene could have been cut from the second issue entirely and saved for issue four.

OK, now I’m going to verge into spoiler territory. Skip to the verdict if you want to remain unspoiled.

As I said before, the last half of this issue is where it shines. Abe hacking up zombies with a bicycle was especially cool. But the big shock was Diego getting killed. We’ve already lost Eliot and Gene this arc, and now Diego has bit the dust too. Dayana’s group is rapidly shrinking and I’m beginning to wonder what she’ll if pushed to extremes. To me it seems Diego has always been the one closest to Dayana. By killing Diego, Arbogast may have seriously pissed her off.

Going into the last issue, I’m feeling a little uncertain about this arc though. There’s a lot of elements still up in the air I’d like to see addressed, but I don’t see how there will be the space to do them justice. I want to see Dayana cut loose and see the full extent of her powers, I want to see Abe see what’s going on with the zombies and make a choice to do something about it, I want to know what’s driving Arbogast and all the stuff that’s been happening in Burnside, and I want Abe to firmly commit to digging into his past. No more half measures. But all that seems a terribly big ask for a mere twenty-two pages.

Overall, this is a slight issue in terms of story and character, but in terms of zombie action, it delivers in spades.