The second arc of “Abe Sapien” kicks off with a different creative team than the first three issues: co-writer John Arcudi and artist Max Fiumara join the story, for a trip to the Salton Sea where Abe looks for answers. 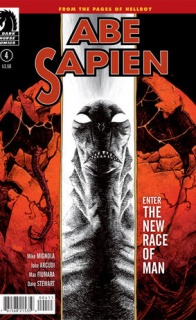 While on the run from the Bureau, Abe makes his way to the Salton Sea, where he encounters a bizarre egg-worshiping cult.

David: After that first arc of Abe Sapien wrapped, we discussed what could possibly be next for our adventuring friend Abe Sapien. Now, he’s back, with writers Mike Mignola and John Arcudi plus artist Max Fiumara telling the tale. Brian, what are your thoughts on where this issue took the book?

Brian: I thought this issue did a really great job bringing in yet another side to the end of the world we’re seeing all over the Mignolaverse: the crazies who are actually enjoying it.

Abe is the perfect guy to be our surrogate for this encounter, and Max and John bring a nice freshness to the pages.

David: I thought this was the best issue yet, absolutely. I love the really small, introspective feel of the issue. It had this wonderful internalized feel to it that was a great counterpoint to Wasteland over at B.P.R.D., as that book is told from the perspective of the human agents and it emphasizes how different Johann is, yet this is told from Abe’s and underlines just how similar he is to humanity.

A slight perspective shift changes everything, and it is really great character work by Arcudi.

I was very impressed, Brian.

Brian: From our various chats with Scott and John, we’ve surmised that this is a story that John has wanted to tell for awhile, and it shows. This story has a strong point of view, and is refreshingly self-assured. As you said, it is a great counterpoint to ‘Wasteland,’ and continues to carve out an interesting path for Abe.

Let’s talk about Max Fiumara for a second. How did you feel he did filling in for his brother?

David: Well, to be fair, he’s not filling in. He’s half of a rotating artist team. They’ll be switching off arcs to keep the Fiumara clan fresh, and I think that is a great idea.

As for how he did, I have to admit, I think with each passing issue the guy is getting more comfortable in this world, and this one his work was at its apex yet here. I loved the conversations he was illustrating between the characters – how expressive their faces and hands were, the storytelling of his flashbacks, the final page – the guy was really on point, and hitting some key story beats we needed to properly enjoy everything that is going on. It helps that Dave Stewart is coloring him, but I hope this becomes a brotherly oneupsmanship book, finding Sebastian and Max alternating doing each other one better. Now that could get beautiful!

Brian: I think Max did a fantastic job. His art has the ability to make even the most insane events seem realistic, and there is this air of danger and fear that runs through every panel of this issue. Lots of great character moments, but dread is never too far away.

Let’s talk about the characters that Abe meets near the Salton Sea. The couple calling themselves “pilgrims” are an interesting pair, and continue the trend of presenting some pretty stupid people as the survivors of these disasters. What did you think about these goofballs?

David: I thought they were really interesting to be honest. I mean, I don’t know if they were trying to bring out “stupid” characters, so much as a look at the average person who might still be around. And I think they’re interesting as I said, and it’s because they just embrace this new world order. You know people would definitely do that, and try to get in the thick of things. It’s interesting to see them interact with Abe, and I think it’s just another slice of life look at what’s going on. I don’t think they have a lot of importance, but they are an interesting foil for Abe.

Let’s get to the main event though: what in the hell is going on with Vaughn?!

Brian: I have to admit, I did not see a resurrection cult popping up.

David: Yeah, I didn’t either. I really didn’t think Vaughn was going to come back, and when he is resurrected and meets Gustav Strobl, a guy who has showed up before (and Mark Tweedale explained to us), I have to admit, I was confused as all hell. But in a good way: it asked me questions, didn’t give me answers, but presented it all in a very interesting way. I have no idea what’s going on with Vaughn Brian, but I am very happy he’s alive.

Brian: I agree. I think having him still a part of the book is a really interesting, and ultimately perplexing, move. This is, yet another, case of the Mignolaverse dudes building towards interesting and unexpected stories that aren’t easy to figure out, but are a whole hell of a lot of fun to take in.

The Vaughn section was my favorite in the issue, if only because it left me with my mouth agape, just trying to figure out what the fuck was going on.

And actually, here’s Mark Tweedale to explain what the fuck was going on:

“I thought I’d give you a little background info to help you write your review. So, you’ve just learned that Gustav Strobl is the crazy guy from issue 1. But we’ve come across this guy before.

Gustav Strobl was Memnan Saa’s teacher, back when he was still called Martin Gilfryd. This is back in the 19th century. Strobl practised what he called “The Darker Philosophies.” He was murdered by Gilfryd and cooked in his fireplace.

Years later in “Witchfinder: In The Service Of Angels,” Gilfryd works some magic in Bedlam Asylum, but afterwards he hears a voice and sees a vision of Strobl declaring that the magic worked that night was by him, and that Gilfryd was nothing.

I hope that helps you guys.”

So, David, if we’re all set, what do you give this bad boy?

David: I’m going to give it an 8.0. I think that’s less than my first issue grade, but strangely, I’d rate this one higher if I compared the two. I liked Arcudi’s feel on the book, and Max’s art was fantastic. What’s not to like? What about you Brian?

Brian: I’ll give it an 8 as well. Ain’t nothing wrong with this comic.