Man it’s weird to not write all of that jazz after B.P.R.D. any more, now that it’s an ongoing series. Either way, this is the first part of Hell on Earth: Abyss of Time, and it brings the return of Scott Allie as a co-writer and James Harren as artist. That’s enough of that though – what’s the book all about? I’ll be tackling this review solo, this week. 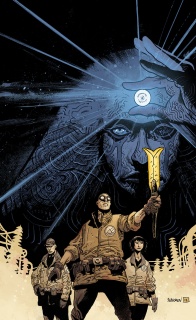 A group of agents enter an abandoned warehouse in Chicago, only to discover the site of a hundred-year-old magical ritual and an old Hyperborean weapon, which leads to shocking revelations about man’s prehistory and the legacy of the Ogdru Hem!

* From the pages of Hellboy!

Quite often, we’ll get minis and one-shots that seemingly are slices of B.P.R.D. life. A look at what it’s like for the other guys. The funny thing about that is, we never really know how they’ll factor in later, or if they will at all. Often though, when they do factor in – they factor in big.

For example, Abe Sapien: The Abyssal Plane introduced Iosif, a character who has quickly become a much bigger factor as the world has turned from bad to worse.

In 2012, we saw a lot of stories that may or may not factor in. Cameron Stewart’s Ashley Strode came about, J.H. O’Donnell was touched on, and we even had vampires make an appearance in the Pickens County Horror. That last one ties into this new arc – The Abyss of Time – in obvious and more tangential ways, as this arc clearly has ties to a number of Mignolaverse books.

First off, the book kicks off with some street level, human B.P.R.D. agents trawling the sewers of Chicago for a find that some punk kid noted. While they tried to find it, the agents openly discussed what happened – “allegedly” – with Agents Peters and Vaughn in South Carolina (also known as the story from Pickens County Horror).

Second off, in the past timeline – we’ll get to that in a bit – one of the agents hears tale of the “cold people,” a tribe of people who clearly are vampires. Vampires are getting a lot more run lately in B.P.R.D., and who knows how they will factor in going forward.

Third off, the story takes place in Chicago – the place Edward Grey, Witchfinder disappeared – and features the Hyperborean sword last seen in Witchfinder: In Service of Angels. We haven’t seen him, chronologically, since he was hanging out with Baba Yaga over in Hellboy, so an Edward Grey appearance doesn’t seem exactly unlikely in the next issue.

Basically, this arc appears to have many existing threads tying into it, and that’s without mentioning the Heliopic Order of Ra and their tie to the Oannes Society (and Panya, in that regard). There’s a lot going on, and we haven’t even really mentioned the main story thread of Agent Howards taking a trip through time and learning the origins of this sword and its true power.

That story itself is an interesting one, well told overall but lacking something in overall urgency. I think one of the strange things about B.P.R.D. now being a traditional ongoing is this follows up something like the close of The Return of the Master, in which literally all hell is breaking loose, and now – within the same thread, instead of a simultaneous mini – we go back in time (twice) to learn about the Abyss of Time. I’m very interested in how this is all going to fit into the architecture of the series, and I always like seeing the human folk of B.P.R.D. and their exploits, but I’d be lying if this wasn’t a slight letdown after the mammoth implications of the previous issue.

That said, it’s still a thrilling adventure, and Howards adventure through time has much to reveal I feel – his advisor seems to know a lot more than he’s letting on – and I’m excited to see how everything else will factor back in to the story, and how that will drive the next year of B.P.R.D. comics.

James Harren returns on art, after he unleashed the amazing in last year’s The Long Death, and his work here throughout is very solid. I love the character work he provides, as Howards blank faces and slow understanding is made all the more real by Harren’s work. It may be a slight downtick on his work from Long Death, but that is more tied to opportunity – or the lack thereof – than quality of work. He just is given less showcase moments, but Harren has proven he can excel in both moments big and small.

All in all, it’s a bit early to tell how much this arc will pay off, but it is a strong start that is slightly mitigated by expectations I as a reader have after the previous issue. One way or another, I’m excited to see where this goes, and it undoubtedly earns a solid buy rating.