“Wasteland” wraps, and it has us wrapped around its finger. Good lord, this is a sweet comic. 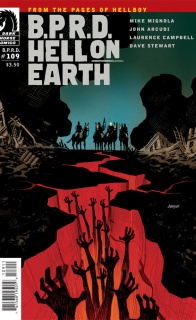 As the agents ride deeper into the Chicago ruins they locate the final resting place of the missing B.P.R.D. agents from “The Abyss of Time”. What they find is a bizarre paranormal crime scene and an army of mutated humans preventing them from getting back to headquarters.

Brian: Well, David, the “Wasteland” arc wraps up, and it is pretty much what we’ve come to expect from Laurence Campbell’s brief run on the book – beautiful, haunting artwork paired with some seriously heartbreaking prose. This is one of those issues that feels like a logical end point for a large chunk of story, and now we’re ready to move onto something else new.

Put differently, I really enjoyed it. What did you think?

David: This issue was aweeeeesomeeeee. To me, the most incredible thing for me was just how in sync the storytelling was. That final sequence with Howards waking up and saving the day, Conan style, was one of the best comic book storytelling sequences I have read this year. The agents fighting off the approaching monsters mixed with the slow zoom to Howards’ face was something we have seen often in storytelling, but rarely that well.

Mignola, Arcudi, Campbell and the rest crushed this arc, and I am just so impressed by this. Wasteland is and was amazing.

Brian: Agreed. The hardest part of doing these reviews is that we are consistently saying how great things are, and that makes it hard to shine an extra special light on an issue or arc that really feels head and shoulder above the rest, but this arc, man, this is going to be pretty hard to top next month. That said, covers by Rafael Albuquerque, a direct connection to “Abe Sapien” and interiors by Tyler Crook help that cause, but still. Damn.

David: Yeah, I have to say Wasteland is one of the best B.P.R.D. arcs ever (blasphemy?), and I can’t believe how much they made me care about Enos, Gervesh, Nichols and the rest. Have we ever had a main thread story that focused so little on one of the “main” cast? Johann was handled as a secondary monster for much of this arc, and ultimately got way less face time than the rest of the cast here.

Brian: It is interesting you say that, because Johann had become a pretty humanized figure (remember him getting that new containment suit last year?), and here he is devolving back into the cold, inhuman person he was occasionally represented as. Johann continues to be, perhaps, the most intriguing “main” character the book has.

But yeah, the grunts (as our pal Tweedale has dubbed them) were played perfectly here, and each one became a multi-faceted character, almost instantly.

Plus, this should quiet all the haters upset that “The Abyss of Time” wasn’t connected to the main story. BAM.

David: Yeah, like I said, the moment where Howards fulfilled his destiny created in “The Abyss of Time” was a fist pump moment and a half. It was really, truly amazing.

Let’s talk Laurence Campbell. Have we mentioned enough that this guy is amazing at art? There were so many standout scenes, either from a sheer illustration standpoint – the crew trotting into Chicago on their horses was spectacular – and a storytelling one – the whole Howards sequence – that it’s hard to boil it down. Laurence Campbell is already near the top of the charts for B.P.R.D. artists, and that is saying something. He crushed this arc.

Brian: Campbell is a great addition to the B.P.R.D. crew, and it seems that he will be getting to do some more work with these characters in the future. His style so perfectly fits the world that the book is taking place in right now, as he manages to make every encounter, every setting, every facial expression drip with drama and import. I honestly don’t think there is a single artist in the B.P.R.D. bullpen right now that I would be more excited to see named on a new arc than Campbell, and I’m a huge fan of most of these guys. Just such an incredible artist.

I want to take just a moment to comment, as I have all three issues of this arc, on just how heartbreaking the moments with Lucas have been. So many times, kids are presented as inaccurately adult-like, and Lucas feels like a real kid, trying to understand and deal with this terrible new world he’s living in. Such great, gut-wrenching stuff.

David: Yeah, when he shows back up with his mother…that was some heartbreaking stuff there. Though I have to ask, do you think it means anything that his mother didn’t harm him?

Brian: To me, that was the most heartbreaking part of it, as it implies that somewhere inside, perhaps, his mother is still there, still protecting him from harm. I sort of hope it wasn’t that, because the idea of loved ones being trapped inside of a monster is the sort of thing that gets me emotional, David. Basically, I’m turning into the Governor from The Walking Dead.

David: Hopefully minus the murder and the rest of it.

I was thinking, maybe that was more than just an emotional turn. Maybe that’s something that could lead to those monster people becoming…not monster people again? I mean, I’m sure they’re donezo, but what if?! Maybe that little bit sets up something a year or two from now?

Do you have anything to add before we grade it?

David: Agreed on that grade. 9.5’s all around, and I just have to say, between this, Vampire and Abe, we might be at a creative zenith for the line. That’s a hell of a thing.

Brian: And next week – LoJo is back!