While David is on his honeymoon, I take this issue solo – keep reading to see how this Howards and Enos focused issue stacks up! 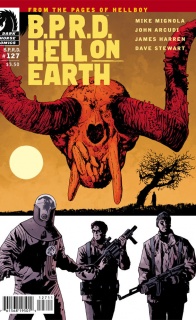 Agent Howards’s past as a prehistoric warlord gives clues to how the BPRD can kill the monster they’ve been chasing. But will Howards be able to put his knowledge to use before the whole squad gets wiped out?

Last month, David expressed concern that the issue didn’t go deep enough with any particular story, instead electing for a wider focus. Well, this is what he gets for being in the Maldives when it is 29 degrees outside my door. This issue is a much more focused installment, resolving the story of what happened to Agent Enos’s team, and if he and Howards survived their harrowing encounter at the end of the last issue.

Well, spoiler alert: they did. And it caused the already crazed Howards to go even deeper into his isolated state. James Harren manages to draw Howards, already a character that seems to be staring into space all the time, seem even more detached behind those goggles. The effect that he and colorist Dave Stewart achieve via the “paint” that he covers his entire upper torso with is stunning; the darker color and more pronounced lines make him look like an interloper from a different medium stepping into this comic. That, of course, further pushes the theme of Howards as an outsider to the forefront, and it works like a charm.

The issue is pretty evenly split between the two characters that return on horseback: Howards and Enos. Both halves of the book delve into unseen pasts of the characters. For Enos, this is the immediate aftermath of last issue – we see how Howards refused to abandon him, hunted for him, and got him back to camp. Enos is, perhaps, the most sarcastic and irreverent character in the cast, and John Arcudi clearly enjoys scripting the character. It is refreshing to have such a cynical attitude, because it seems like the most logical possible position to take; if the world was falling apart around you, wouldn’t you be sort of a catty bitch every now and then?

On the flipside of that is Howards’s flashback to the prehistoric era Harren drew in “The Abyss of Time,” where Howards was known as Gall Dennar, and was an incredible warrior. Harren fits like a glove with this time period, and his action sequences are beyond great. Howards/Dennar simply jumps off the page when Harren draws him, and there is a certain kinetic energy that he brings to the flashback sequences that is unparalleled anywhere else in Harren’s work on “B.P.R.D.” – that’s not to say it outperforms something like, say, the Prospect Park sequence from “Reign of the Black Flame,” but there is nothing he has done for this series that is more full of pure, unadulterated action than what he does when Dennar is in his full glory, and it is truly something to behold.

This issue also continues Enos’s ascent as one of the stronger voices in the Bureau; he seemingly has no issue stepping up to Johann, or even to the intimidating Howards. He seems to be someone who can rally the troops behind him, while still maintaining a somewhat antagonistic relationship with just about everyone. He’s a very interesting character, and one I’m glad is getting more attention.

Final Verdict: 8.0 – Overall, this issue corrects a few of the problems from last month, and looks freakin’ fantastic doing so. A continuation of the most consistently great comic on the stands.

Welcome to Mignolaversity Debrief, our column where we explore the latest stories from Mike Mignola. This time we’re discussing “Witchfinder: The Reign of Darkness” #3 with writer Chris Roberson and artist Christopher Mitten. If you missed our previous debriefs, here are links to #1 and #2.I love this cover. Given that all five covers for […]