This issue is an absolute heart-breaker and, please be warned, we will spoil the hell out of it – so be warned, and proceed with caution!

Also, please note, this was written before we had read this. 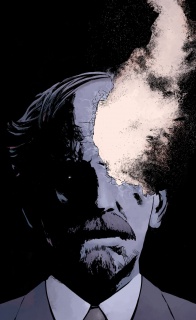 Agent Johann’s alienation from the other BPRD agents after a horrific mission causes him to take drastic measures. Will the other agents tell Kate what really happened? What will happen to the ghost agent?

David: Well, I mean, he’s gaseous, so…I mean, maybe he’s cool? Maybe he’s just going to go into that chill raccoon to the side of the door and eat some garbage for a bit? He just wants to go woodland for a while…right? Right? RIGHT?!

David: Okay, a little leaky? That was (attempted) suicide by Allen wrench.

Brian: I am speechless at the thought of Johann being gone. I guess it is possible, but it seems like such a sad and uneventful way to go.

David: But also a totally logical way for it to happen. I mean, what’s he going to do? Get blown up by a grenade and float away? It makes a lot of sense that a character that has been defined lately by his lack of humanity to go out by suicide, if you’d like to define it as such. He’s a broken man who hardly is even a man any more, and it may be uneventful, but it fits. It was tremendously well handled, too, and ultimately it was just a sorrowful issue. But wasn’t that the beginning of an arc? Am I misunderstanding what that issue was? Maybe that’s not it for Johann.

Brian: It is the beginning of an arc, but I could see Mignola + co. taking him out this way, especially because the element of surprise was on their side. I think because it was so logical, it made it hurt even more. “Of course Johann would be miserable; of course he’d try to kill himself.”

Again, this all supposes that Johann is able to kill himself. We know that the containment suit helps him to act/feel human, but do we really know what letting him out of that would mean? I honestly don’t know the answer to that question.

David: I just thought of this, but here’s an outlandish theory alert. So we know Johann is likely to roll (or…whatever it is mist like people do) around for this arc. We both probably don’t think he’s going to die. We know he’s depressed, but we also know he’s been doing his own research projects, like Kate found in his room. We know that research was primarily related to, seemingly, Sledgehammer stories (and maybe a bit of LoJo action).

What if his final destination for this arc is the Vril-powered Sledgehammer suit? Just spitballing, but we know the suit always has a human spirit driving it, and we’ve seen two different drivers in the seat before. Do you think it’s possible they’re setting up a power upgrade for Johann for the final run of the series?

That would seem to connect a lot of dots; it would explain why the Sledgehammer suit has been brought back into action, it would give Johann a new challenge/toy/power up, and it would also point towards the end game being closer than, perhaps, we’ve been thinking.

Yeah, makes sense to me. Consider me a believer! Where do I send my check?

David: To the end game being closer than we’ve been thinking thing, Mignola did recently say at ECCC (I believe) that the end is approaching for all of this. It’s not this year. It might not be next year. But it’s on the horizon. That means this is the time to start putting the chess pieces on the board. They already brought back Liz, but she can’t do anything to the Black Flame. We know the Sledgehammer suit can hang with the Black Flame. Maybe that’s something Johann has realized and it’s his big next move.

Let’s talk about your boy Peter Snejbjerg. Not that it’s an exact fit, but I feel like that was the most he’s ever reminded me of John McCrea, and I mean that in a positive way. His characters were tremendously emotive in this issue and it made everything all the more impactful. What did you think?

Brian: As you can probably guess, I’m a huge Snejbjerg fan, knowing my affinity for “Starman.” I think he is one of the most expressive artists on the Mignolaverse roster – he can do more with a facial expression than almost anyone else in comics. I always find him an interesting artist for the Johann tales as, obviously, Johann has no such face to speak of – but Snejbjerg manages to wrangle emotion out of him anyway.

Snejbjerg has a little hint of the San Francisco comix scene in his work, and it reminds me ever so slightly of when Richard Corben did some “Hellboy” work, where there are still hideous monsters and crazy shit happening, but there’s also a level of acknowledged absurdity in the way people react to those hideous monsters and crazy shit. I feel like we say this all the time, but the Mignolaverse is really a murderer’s row of talented artists, each one with their own specific talents.

I also love the pairing of artist and lead character – James Harren on Howards, Laurence Campbell on the Sledgehammer suit, Snejbjerg on Johann.

If this is the end of Johann, then it also might mean the end of Snejbjerg on these books, which is super sad, too.

David: I highly doubt the guy’s dead, and on top of that, I’m sure they’d find a way to fit Snejbjerg in with any character. After all, Laurence Campbell has done several arcs without the Sledge suit, just like Harren has done work outside of Howards. I think it’s more of a feel type thing, and maybe the type of story related to those characters just fits them.

I’m interested to see how the art teams break down going forward, what with Harren being all busy with “Rumble” and Tyler Crook on “Harrow County”. We know Julian Totino Tedesco is joining the fray, but I wonder if we’ll be seeing some other new artistic voices in the mix?

Brian: I mean, it wouldn’t really surprise me to see a few new faces popping up, but the way that the books work, with knowing certain arcs months or years in advance, it wouldn’t surprise me if those artists, though attached to ongoings, had time penciled in to come back for an arc or two.

Plus, that gives time for Cameron Stewart to bring back Ashley Strode, something we’ve been clamoring for for ages!

Anything else you want to talk about?

David: Unless Cameron Stewart has a clone, or likely more than one clone, I don’t think it’s likely he is coming back any time soon. Dude’s the busiest man in comics.

And nah, I’m good. This ended up being more of a joint therapy session than a review, I think, but I’ll give the issue a 7.5 overall.

I’ll give this an 8.5, as it hit me directly in the gut, and has stuck with me all week – that’s a sign of a true winner for me.