David is on vacation, so I’m going solo on this one. And boy, is this a rough issue to have to do without my faithful Mignolaverse brother in arms at my side. Be warned, spoilers are discussed. 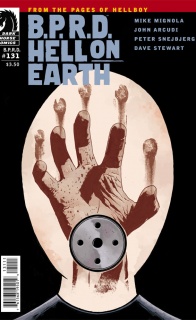 Kate confronts the BPRD agents after Johann’s disappearance to learn the truth about the motel massacre in a small Kansas town.

One of the many great things about “B.P.R.D.” is how characters can grow from veritable red shirts into heroes without too much resistance; you put them in the middle of a mission, and their heroics can raise them into something special. Over the past few years, we’ve seen a few B.P.R.D. agents take that journey: Howards, Nichols, Gervish, and Enos, specifically, have all become indispensable members of the Bureau and, week to week, mean just as much to the book as Johann, Kate, and Panya.

That is, until the creators dispense of them.

Agent Enos, a man who spoke his mind and was a bit of a field leader for the boots on the ground, was shot in the eye, Moe Greene-style, by rednecks worshiping a fetal monster. These missions are, to me, far more interesting than just battling giant monsters, although those, too, are fun – we are getting a really interesting look at what the world looks like after much of it has gone to pot. These folks in Kansas have had their lives ripped from them, and are grasping on to whatever helps them make sense of what a fucked up world they happen to be living in. And, so, while the locals do terrible things, we can understand why they are doing those terrible things.

Enos’s death is abrupt and incredibly sad, but it is what follows that gives the issue much of its resonance – in order to get across the road unscathed, Johann lets himself out of his containment suit, and takes over the dead body of Enos, and walks, talks, and kills using his body as vessel. This is a hugely terrifying experience for Agents Nichols and Gervish, as well as the other field agents who have to watch their fallen brother used like a puppet, all the while getting more and more destroyed as he walks across the street.

This is all illustrated in horrific detail by Peter Snejbjerg. There are few better in the business at bringing emotion out of characters than Snejbjerg, and seeing him plaster a surprised expression on the face of Enos, an expression he takes with him even as he loses bits of his face and body to bullets and grenades, is terrifying. The image of a dead-eyed Enos is going to stick with me for a long time.

But Snejbjerg also treats the rest of the cast with the same amount of attention, and you can see the anger behind the eyes of Nichols, the heartbreak of Gervish, and the resignation of his own horrific state in the blank mask of Johann, all expertly crafted with as much subtlety as could be expected in a comic. If James Harren illustrates the warrior spirit of the Bureau, then Snejbjerg illustrates its longing heart. This issue, and the arc in general, has been absolutely gut wrenching – and while the writing provides the overall beats, the way it is illustrated is what really brings these issues to the peaks that they reach.

This issue deals with anger, loss, the realities of war, friendship, humanity, the search for purpose, the rationalization of people in need, worship, betrayal, faith, and death in ways both practical and eloquent. I cannot imagine reading this book and not being moved by a dozen different pieces. The first time I read it, I was so taken by the images that I was practically numb to the horrors within. The second time I read it, I began to understand the anger of Nichols more. The third time, Johann became more sympathetic than ever. How many books can change so much from simply a few re-reads?

It is because of issues like this that “B.P.R.D.” remains one of the finest books in all of comics. The nuance all the creators show in their handling of the death of (what could be described as) a minor character shows just how dedicated Dark Horse and co. are to presenting this book as something without precedent in the world of comics.