The Baltimore comic weaves itself into the final chapters of the Baltimore novel. Full spoilers to follow, including a picture of the last page. 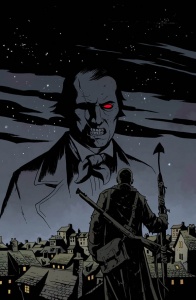 After his long hunt, Baltimore finally confronts the vampire who destroyed his life in London for a final showdown!

Having read the novel Baltimore, or, the Steadfast Tin Soldier and the Vampire actually makes this comic harder to review. Aside from a few pages with Baltimore on his way to London, this is a direct adaptation of portions of the novel. The first six pages with Dr Rose, Aischros, and Childress are comprised of various beats carefully selected from the first two hundred and a bit pages from the novel so as to set the scene. From page nine onward it picks up from Chapter 2 of “Crescendo: Lux et Aeternum” and finishes midway through Chapter 6.

Having only fourteen pages in which to adapt four and a half chapters of material is tough, especially when certain beats (such as seeing Bentley’s picture of the Red Death for the first time) really rely on having read the rest of the novel. The scene has to be in there, because it’s such an iconic moment from the novel it couldn’t possibly be cut, but the comic really can’t do anything with that moment. It doesn’t have access to the emotion firepower from the novel, because in the comic that part of the story simply hasn’t been told (and it would require several graphic novels to do so). The moment is truncated and explained away in a single line of dialog from Bentley instead.

It’s unfair to measure the comic against the novel, yet at the same time unavoidable. And of course, the biggest difficulty here is that I’ve read the novel; I knew exactly what was going to happen every step of the way. Largely bereft of the character moments, for me this issue read like a recap, stripped down to its bare essentials. I don’t see that it could be done any other way though. It is what it is, and it is smartly done.

The team, especially Ben Stenbeck, really went the extra mile to make it match as closely to the novel as possible. The blobs of black and red paint on Bentley, the crooked pictures on the walls, Aischros stabbing one of the skeleton creatures in the eye… They’ve clearly gone through the novel and picked pieces that, while unessential, really make it feel like the comic and the novel are two aspects of the same creature. It is authentically a part of the Baltimore novel. Stenbeck had an especially daunting task ahead of him, since there are passages described in such emotive language that it can be very hard or even impossible to depict as a physical reality.

So I have to say I was very impressed when he nailed the moment on the final page of this issue. In the novel it is described as follows:

SPOILERS FOR THE END OF THIS ISSUE FOLLOW. THE LAST PAGE WILL BE REVEALED.

The [door] frame cracked as it burst open, tearing from its hinges and falling, ablaze, to the floor. Yet, somehow, Aischros felt a chill in the room, as though the fire had suddenly been robbed of its heat.

Lord Baltimore stood upon the threshold, cloaked in his military greatcoat, weapons hanging all about him. Firelight flickered and gleamed upon his shaven head, and wide dark eyes. 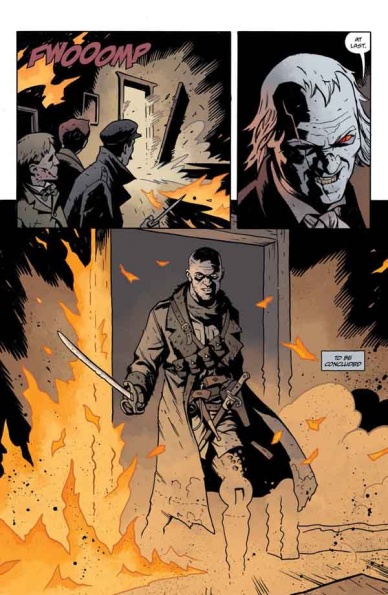 The passage above adapted to the comic format.

I challenge anyone to do a better job than what Ben Stenbeck put to the page. And I have to tip my hat to Christopher Golden. There’s no way to literally depict feeling “a chill in the room” in a comic, so he has Haigus looking ominous and saying, “At last,” and there it is… a feeling of a chill in a flaming room. Didn’t I say this was a smart adaptation?

Nonetheless, I hope the second issue will add something new to ending from the novel, but with only twenty-two pages, I don’t expect there to be much if there’s any at all. All the really difficult stuff is in the next issue, the kind of stuff that is just so very Mignola, slow and jaw-dropping.

For people who have only read the comic, you’ll enjoy this issue much more. It is essentially tailor-made for you guys. I wish you could know the surgeon, the sailor, and the soldier the way I do. It completes the picture, and Golden’s prose somehow reads like black-soaked Mignola panels from his moodier stories. So one last time, I’m going to recommend the original novel.

Overall, this issue has certain limitations in that is adapting scenes that were originally written with a novel in mind, but it is still an excellent comic. And I can assure you, in the next issue big stuff happens.