“Baltimore’s vengeful savagery made him even more terrible to behold than the devils he slaughtered.” 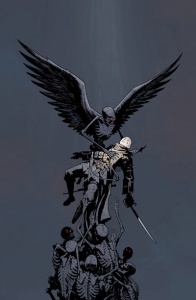 Vengeful and doomed, Lord Baltimore finally catches up with the vampire who murdered his family… but it turns out the vampire has been waiting for him.

This is the end. Lord Henry Baltimore has been hunting Haigus since the vampire killed his wife in 1916, and now the two meet for the last time. With the first issue, I had known exactly what was going to happen since for the most part it was a direct adaptation of the original Baltimore novel. I had lamented the unavoidable truncation of scenes and dialogue, as well as certain character beats, to the point that sections felt like a hurried recap.

This issue has none of those problems. While issue one adapted over five chapters from the original book, the second adapts a mere twelve pages. In terms of pacing, this meant it felt much more like the book. However, the tone was different. Similar, but with a notable shift of focus. While the novel had a certain grim finality to it, the comics cast the action in a different light, instead focusing on the greater evil at work. This was something I really enjoyed. This issue is an end, but it isn’t the end. It’s the end of a chapter that began back in 2010 with The Plague Ships, so while it was drawing many things to a close, it was also setting the up the stakes going forward, and they’re big. 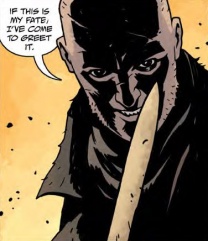 But I’m getting ahead of myself. I’m just very excited. Let’s talk about this issue before I get to what may lie ahead.

First, I have to praise Ben Stenbeck yet again. His Baltimore is fierce in this issue, moreso than he’s ever been before. And it really needed that to sell the emptiness of the finale. There was a moment on page sixteen with the Red King looming forward in his torn painting followed by Baltimore’s memory of waking in a pile of corpses. The Red King’s glowing eyes were drawn smaller in their sockets than usual, like they’re narrowing, seeing Baltimore for the first time. The way that section was written in the novel, I wasn’t sure how the comic could capture that moment, but it absolutely did.

Again, Christopher Golden has a way of tipping his hat to iconic lines from the book. There was something in the book about how heavy Baltimore’s prosthetic leg had become from all the nails, so it was nice in the comic, when so much was weighing upon Baltimore, that his leg thumped heavily on the way down the stairs, followed by a tight panel on the many nails in the wood. This issue has room to breathe, allowing for moments like this that absolutely heighten the storytelling.

This issue progresses from fiery oranges to cold blue-greys and rich reds, finally ending with the sequence downstairs in dingy greys and faded browns. Dave Stewart’s colours felt like the mood of the book, which is no small piece of praise. He got me right back to the feelings I had when I first read the novel.

Spoilers for the ending to follow. Skip ahead to the verdict if you want to avoid them.

I simply have to talk about the last two pages before the epilogue, the moment when Baltimore reaches into his chest and rips out his own heart. The layout here was great. After that heart is set on the table, we don’t see Baltimore’s face again. He sets it down and walks away into the darkness. That last panel with the heart against an ocean of black says everything about Baltimore’s emotional state. It was the perfect way to end it.

And then there was the epilogue, two pages of teases for what’s to come in the Baltimore series. It appears Baltimore will no longer be fighting alone. He’s seen on the hunt with Childress, and he’s still in contact with Dr Rose and Aischros, both of whom seem to be recruiting. Just like Baltimore’s wooden leg, Rose now has two wooden fingers on each hand. This striking physical similarity came across as symbolic of how Baltimore’s companions are shouldering some of his burden, and seeing it was my single favourite moment of this issue.

And at the very last, as Rose speaks of the Red King, he doesn’t say that the Red King knows about Baltimore, he says it knows about “us.” That Christopher Golden chose “us” as the parting word says volumes about what’s to come. I’ve often felt that Baltimore is at his best when he has someone to interact with, which is one of the reasons I became so fond of Simon Hodge in The Curse Bells (and subsequently so dismayed at his peril in The Inquisitor). The stories ahead will seemingly have much more of that. There are two new companions seen briefly here, still a mystery at this point, but it hints at a larger cast and more exotic adventures as Baltimore strides into the 1920s.

The best is yet to come.

The story so far: The novel and the first four collected volumes. I recommend them all. The fourth volume comes out in June.