The Cult of the Red King races towards its finale in this taughtly paced penultimate issue. 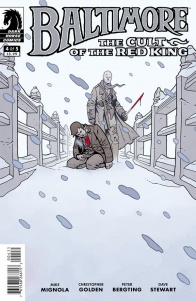 The ancient origins of the Red King’s cult have been discovered.

The influence of the Red King grows stronger, but Baltimore’s faithful allies have discovered the origins of the original cult. With this new knowledge, are they closer to ending the terror consuming the world or further than ever from salvation?

After the way the last issue ended you will, no doubt, be shocked to learn that Lord Baltimore is not dead. OK, perhaps that’s not so shocking. What is shocking though is that he doesn’t keep going alone. In fact, he acknowledges that he can’t deal with this latest evil alone.

This arc’s focus has been on the group and how they work together. Baltimore himself is their leader, but he hasn’t really worked with them yet, not properly. That changes in this issue. Not only does Lord Baltimore openly acknowledge their usefulness, he also acknowledges the futility of his actions alone. This is a major step forward for the character and an evolution of the series, and the way it plays out made for a very satisfying read.

Another aspect I’ve been enjoying about this series, and it’s coming more to the foreground as we approach the ending of this arc, is that this is not just a group of competent individuals, but a group capable of working together, leaning on each other’s strengths. Lord Baltimore is the last to realise this, but now that he has, it’s fantastic to see what they can accomplish together. And yet even working together, the evil they face could overwhelm them. This arc isn’t messing about. It feels like one mistake could cost our heroes dearly. Death hangs over this whole story, and I’m not just talking about the Grim-Reaper-like figures in Carthage. I’ve said it before in my previous reviews, someone is going to die this arc. The writing has been on the wall since the first issue.

The thing is, practically every character seems to be in mortal peril at this point. The Cult of the Red King is a tense read, one that doesn’t slow down for a moment. This is a story that’s sprinting towards its conclusion. Peter Bergting seems to revel in this energy. There are only a few panels of genuine stillness in the entire issue, and they’re broken almost immediately.

I’m making this sound a bit grim, aren’t I? The thing is, I had a blast reading this. It’s an incredibly fun read with genuine momentum, never mindless action. The stakes are always clear, and the action ramps up in such a way that the focus is on what it means for the characters in the scene. And for an issue that’s mostly action, this isn’t a light read. You’ll get the end feeling like you read a satisfying chunk of story.

OK, let’s set aside the broad strokes of this story and get into some specifics that really work for me. One thing Bergting really accentuates in his art is eye contact. I’m not just talking about the expression in a character’s eyes, where a drawing communicates to the reader a certain emotion or pressing matter on their mind, I’m talking about a look that non-verbally communicates to another character. This isn’t just in the drawing of the character’s face; it’s in the layout, it’s in the POV of each panel. Hell, Bergting draws an exchange between a wraith with pupil-less eyes and Captain Aischros wearing a mask that completely conceals his face, yet as a reader I still knew exactly what was being communicated there.

God, I love the way he draws those wraiths too. Bergting has a great sense for the darkly fantastic. The way he draws this world, it feels ancient, giving the story genuine weight as it delves into the history of the Cult of the Red King. Mignola and Golden threw Bergting in the deep end with this arc. I mean, he’s got a large cast of established characters to draw, and a story that demands he not only match what’s come before, but exceeds it. And Bergting totally pulled it off.

The way Golden and Bergting are working together on this arc, I swear they seem like they’ve been working together much longer than they have. This is only their second story, and yet the tone of the writing and art are in such perfect synchronisation. These guys make it look effortless. This is, without doubt, the best Baltimore story arc to date.