The end is upon us, “Baltimore” readers. 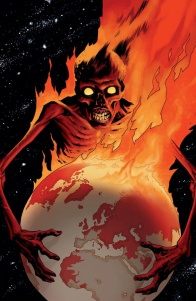 Lord Baltimore is missing. The Red King—evil incarnate—is taking over the world. Baltimore’s team has been driven apart, with some of them dying on the frontlines while others are in hiding.

Since the day he set out for revenge on the vampire who killed his family, Baltimore’s fight has gotten bigger than he’d ever imagined, but what role will he take as evil finally threatens to consume the world?

August 2007, almost ten years ago, Lord Henry Baltimore’s journey began in the pages of “Baltimore, or, The Steadfast Tin Soldier and the Vampire,” an illustrated novel from Christopher Golden and Mike Mignola, and continued on in comic form with Ben Stenbeck, then Peter Bergting on art. And now here we are at the final arc. Our journey is nearly at an end.

Right from the beginning, this story feels very different from the others. Instead of picking up where things left off, Golden jumps ahead five years to 1925, in the midst of a second World War, this time against the Red King and his legions of supernatural creatures and worshipers. Most of Europe and Asia has already fallen, and the war fast approaches a tipping point from which there is no hope of victory.

And Lord Baltimore? No one even knows where he is…

We’re really on the outside looking in in “The Red Kingdom.” This is the same world we’ve seen in the comics before, but much more broken, much more vicious.

Honestly, I think it would could have been very easy to draw a comparison between the world of “Baltimore” here and the world of the Hellboy Universe in “B.P.R.D. Hell on Earth.” Both are stories of a Hell being unleashed on Earth, and while I’ve been critical of the similarities between these two titles in the past—especially the way the god-like monsters of the past looked an awful lot like Ogdru Hem—I have no such criticism here. The Hell unleashed on Earth in “The Red Kingdom” is an entirely different animal, drawing much more from the two World Wars than from god beasts. It is a real strength right from page one, especially since the end of “B.P.R.D. Hell on Earth” is still fresh in my mind.

In a strange way, this story is all about rediscovering the characters again. After all, they haven’t been idle in the last five years, and seeing how they’ve grown and changed is very much the engine of this story, driving everything forward. I’d like to comment on these various aspects, but since this is only the first issue, I’ll avoid spoilers in this review.

The battle sequences in this issue are definitely something you’ll want to linger over. Golden and Bergting have created this fantastic mix of high fantasy and elements from the wars of the early Twentieth Century. There’s something really cool about seeing witches casting fireballs at biplanes. The series began as an alternate history, and it’s grown into something altogether unbound.

Speaking of Berting’s art, his use of shadow in this issue makes for great atmosphere, especially when he has smoke and fire to work with. Also, and this may seem an odd thing to mention, but I like the sound of his battles. There’s this thing I see in battle sequences in comics, where the same elements are used over and over again to fill out battles, but Berting peppers in unique elements to panels that evoke and energy and a sound, such as a horse being lifted up by a giant tentacle. You look at that image, and you can hear the horse whinnying in dismay.

And I have to mention Clem Robins here too, because the way he uses sounds effects in this sequence orchestrates the reader’s attention. He doesn’t use sound effects all the time. In fact, he often drops them out, even though there’s an obvious sound in the image. Instead, he uses the sound effects to show where the attention of the characters is. The sounds are almost always linked to a character’s eyeline. This may seem like simple stuff, but it’s things like these that make a big action sequence read smoothly.

When it works, “The Red Kingdom” really works, but unfortunately there is a downside to the time jump. There is a lot to explain, so this issue has many scenes with the characters talking about the plot. For the most part it gets away with it, especially with the evocative imagery it’s often paired with, but there were a pair of occasions when I felt things were revealed in a manner that was too direct. I would have preferred to relax the pacing a bit and see more of these moments play out.

That said, I think that was a consideration. This story is two pages longer than the average issue of “Baltimore.” It seems the team behind the book felt it needed a little more breathing space too.

Still, the story found the space to include little things that I appreciated. I particularly liked the nod to Simon Hodge. He may have died, but it was a nice touch to show that his sacrifice truly meant something in the grand scheme of things. When we were first introduced to him in “The Curse Bells,” he was such a naïve and idealistic fellow, but he did something Lord Baltimore could not, and he gave humanity a fighting chance.

As for the rest of the issue, you’ll have to wait and see when you read it. But I must say, it’s exciting to see Golden and Bergting so willing to shake things up in the final arc.

Final verdict: 7.5. “The Red Kingdom” is a compelling opening to the final chapter of “Baltimore.” There’s a lot squeezed into a mere twenty-four pages.