Baltimore’s broken companions team together for a last-ditch effort to topple the Red King. 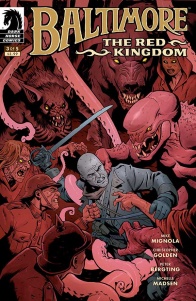 Baltimore’s team fight their way into the Vatican as the Red King prepares for his coronation day.

Spoilers ahead. You know, for all this talk about the Red King, I think there’s no greater threat to the success of Baltimore and company’s mission than all the unspoken animosity in the group. Back when this group first assembled in “The Witch of Harju” and “The Wolf and the Apostle,” there were some problems, but for the most part they worked together. By “The Cult of the Red King” they were at peak performance and since then they’ve been in steady decline.

There was a moment at the end of “Empty Graves” when Sofia thought she was going to die, and something snapped in her. She’s never really come back from that. Her loyalty to Lord Baltimore’s cause has never wavered, but in the process she’s detached herself from a real life. She’s become the very thing she warned Baltimore against.

As for Harish, over the years he had fallen in love with Sofia, but when he confessed his love to her, she disappeared for two years. Harish has taken this to mean Sofia harbors affection for Baltimore, so he spends most of his time scowling and sniping.

Meanwhile Kidd feels betrayed since he was led to believe Baltimore had been dead for two years. He’d given everything in service and yet he wasn’t trusted with this secret.

Judge Rigo has got the same problem he’s always had, that he doesn’t want to be anyone’s pawn, especially not Baltimore’s, but now he’s been put in a situation where refusing the path set before him is tantamount to suicide.

Dr. Rose is an utter mess. These stories always seem to reduce Dr. Rose a little further with each arc, to the point that he’s barely recognizable anymore.

And Baltimore, he’s had to cut himself off from the world to get the upper hand against the Red King, and though he bears it silently, it has taken its toll, even though it seems his most loyal companions don’t see this. They only see him as the empty man he thought himself to be for so any years, driven only by revenge.

So yeah, the group is a mess. They’re still working together, but there’s all this tension bubbling underneath the surface. And that’s really what this issue of “The Red Kingdom” is about, I think. It’s about all the tension in the group, and each of them trying to talk about it, but failing. They don’t even try that hard. They’re just sort of resigned to it at this point. Broken.

Aside from the opening action scene, this issue of “The Red Kingdom” is very quiet, essentially a series of conversations before the final battle. I suppose it seems a bit small given how close we are to the end, but I like that about it.

Meanwhile, the Red King continues to rage against his impotence and his loss of godhood. Don’t get me wrong, he’s still powerful, but he strikes me as child-like now that he’s been reduced to a human form. There’s a moment when the Red Witch comes to visit him in his room, and there’s blood and corpses scattered about. Something about it made me think of a mother visiting a petulant teenager, especially as she asks, ‘What was this display all about,’ and he basically replies, ‘I’m trying to prove I’m totally badass.’

Like a similar scene in last month’s issue, it reinforces how vulnerable he is now, though I think the one in this issue does it a little better. The scene is slightly redundant. I would have preferred the scene here and the one in last week’s issue collapsed into a single, tighter scene, but it’s the kind of trade-off necessary to tell the story over five issues, each a month apart from the next. Some redundancy is necessary for the format whether I like it or not.

For me, the stand-out moment of the issue was the Red King arriving in the Vatican. Golden wrote an evocative scene, and Bergting delivered. They gave it the space it needed to get a sense of the location and focus on the impact the Red King’s arrival has. Given this is where the finale will likely take place, I’m glad they took the time to establish the environment before the chaos of the finale unfolds.

Or maybe not. Either way, it was a cool scene.

There was a coloring issue in the final sequence. The colors for the interior of the trattoria and the exterior panels was extremely similar, especially in terms of lighting. There was no contrast, so the impact of intercutting between interior and exterior was diminished. I think this is a major part of a colorist’s job on a comic, to separate environments and scenes, to find contrast that underscores the tension in a sequence, but it wasn’t happening here. Especially given the dramatic turn in the last two pages, this seemed an unfortunate missed opportunity.

I have to say, I really liked seeing Lord Baltimore in disguise as a fisherman, a nod to the character’s influence from Captain Ahab (just in case the harpoon and prosthetic leg weren’t enough). The series has never been shy about the Moby Dick influence, and I think acknowledging it to this degree more than anything so far made me feel that we’re approaching the end.

It’s odd, because the end is really close, but I still don’t feel it yet. Honestly, I don’t know how Mignola and Golden plan to wrap this up in only two more issues. Given the state of things, it seems a tall order. Forty-four pages doesn’t seem enough.

But this was a solid issue, gently reminding the reader where each character is at emotionally before diving in the big finale.

Final verdict: 7. A much more mood-focused issue, a necessary pause before the end is unleashed.