Rookie Mignolaversity writer Mark Tweedale returns today, to give us a look at, perhaps, the most unsung corner of the Mignolaverse, the domain of Lord Baltimore. 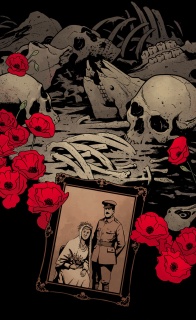 Eisner Award–winning horror master Mike Mignola and Christopher Golden present this horrific double feature about a widow with a not-quite-dead husband and a child-killing vampire taking refuge from something even worse.

Lord Baltimore is back, this time in a pair of stories taking place in the months just prior to the first Baltimore series, The Plague Ships. This isn’t explicitly stated though. If “June 1916” doesn’t mean anything to you and neither does the presence of some hair on Lord Baltimore’s head, you could easily be forgiven for thinking these are simply the next stories chronologically.

That said, knowing this did change the reading experience for me, especially in The Widow.

Shortly before this story, Lord Baltimore had to slaughter his family turned vampires, and then began his hunt for Haigus. At this point he’s still in England, searching for any leads, which brings him to the home of the widowed Evelyn Yeardsley. Evelyn’s husband died in the war… and then he came home.

The Widow offers a glimpse into what could have been Lord Baltimore’s fate, had he given in to his wife when she been turned into a vampire. Evelyn is a tortured soul, alone and afraid to let go of her husband, and a prisoner to the monster he has become. The final scene showed a more sympathetic and human side of Baltimore than I’ve seen before, and without sacrificing the more driven aspects of his personality.

This story was full of the things I like about Baltimore. It’s an atmospheric, moody piece. The artwork was excellent, as it always is in a Baltimore story. Dave Stewart’s colors were suitably subdued, although there is an action scene where he gets a chance to crack out the reds. It’s a fun moment in an otherwise somber story, but it fits alongside everything else very comfortably. A tale like The Widow sinks or swims based on pacing more than anything else, and here Ben Stenbeck shows he is very much in control. I lingered on the pages with Evelyn alone in her house, especially those in front of the mirror or clutching her blankets in bed. Even without dialog it’s effortless to empathize with her, and I was with her right up to her final choice.

Christopher Golden found just the right note to end this one on. The expression on Baltimore’s face as he leaves shows how much of the experience he carries with him as he moves away from the light into shadow.

In The Tank, Lord Baltimore is asked by a young boy to kill a vampire hiding in a tank that has been killing his friends.

Ben Stenbeck’s art really caught my attention in this one. When he first started on Baltimore with The Plague Ships, I enjoyed the art, but there was something stiff about the characters. He hadn’t become comfortable with them yet. This story really made me realize how much this has changed. He’s taken ownership of Lord Baltimore and his world. The level of performance he’s getting from him is much more nuanced than it was in the beginning.

This was showcased especially when Lord Baltimore is talking to the French child, and then again when he’s sitting outside the tank, waiting for the starving vampire to come out. The acting isn’t all just in the faces; It’s a full-body performance.

I find Baltimore is always at his most interesting when he has someone to play off of. In The Curse Bells it was Simon Hodge, and the story was all the better for it. In this case, it isn’t an ally, but a vampire that won’t come out of his hiding place. I liked the sequence with Lord Baltimore impatiently trying to goad him into coming out, but unfortunately the ending didn’t live up to the promise set by such an inventive premise.

With double feature comics I always find there’s one story that’s just right, and another that seems truncated and shoe-horned in. The Tank is the latter.

Overall I felt like this was an idea that should have been left on the shelf until a better ending came along. This one feels a little like they ran out of pages so they went for the emergency escape. It’s not that it’s a terrible ending, but it’s not an ending worthy of the premise.

All in all, these aren’t stories that advance the plot, but they’re good little vignettes. I feel like they’ll read better in the eventual hardcover collection alongside A Passing Stranger and The Play.