Baltimore enters into a new phase. 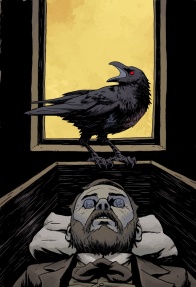 Baltimore shelters a woman on the run from a possessed dead man and the witch playing his puppet master.

Baltimore is back, but there’s been some changes. First and foremost, this arc is drawn by Peter Bergting when all previous arcs had been handled by Ben Stenbeck (he’s on covers this time). And Lord Baltimore now fights with companions at his side: Thomas Childress from the novel and the previous arc, and newcomers Quigley and Harish. But it’s still Baltimore.

Mostly. After the events of Chapel of Bones he’s no longer driven by revenge. While he’s as gruff as ever, he no longer needs to wrestle with his conscience whenever he sees a person in peril. Now he seeks them out. He doesn’t ignore pleas, he listens and tries to help as much as possible. He still nurses a heavy burden, but the reluctance is gone.

It’s satisfying to see Lord Baltimore on the hunt with companions at his side, asking about the troubles of the people of Harju with the intent to act, keeping nighttime vigil by a woman’s bed. He is still a tortured and damned soul, but he seems less hopeless somehow. He may have no hope for himself, but he has it for others now.

As for the change in artists, I found it very smooth. In my mind Ben Stenbeck was the Baltimore artist, and I had hoped he’d be on board until it ended, so any new artist was never going to have it easy coming on board this series. But Peter Berting’s work matches the tone established by Ben Stenbeck, and Dave Stewart’s colours make it feel familiar even though it’s new. A few pages in, it’s just Baltimore. There’s no doubt Peter Bergting has an affinity for the location and era. And for cats too. You can tell he really knows how they move.

This issue is much too short though, and much of the story is spent setting up the mystery and conflict in Harju and the new status quo. One thing I’m looking forward to seeing develop is the dynamic within Baltimore’s company. In the novel, Aischros, Childress, and Dr. Rose all had stories that led them to believe Baltimore and eventually fight by his side. I’m eager to learn who Harish is and what compelled him to join Baltimore in his task.

Furthermore, I’m already concerned for the future of these newcomers. Back in the first issue of Baltimore it was said of him that, “Death sits upon his shoulder, not for him, but for those who ally themselves with him. His quest will cost the lives and souls of everyone he loves.” I’m hoping most of them get a good run on the series before Death claims them though.

If you’re new to the series, check this out. In many ways this seems like a re-introduction to the Baltimore‘s universe.