Peter Bergting’s first arc on Baltimore comes to a close in a rather enjoyable issue. 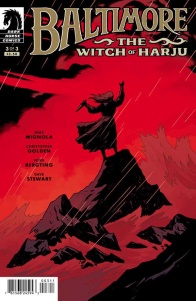 Baltimore’s investigations come to a halt when the dead of Estonia rise from their graves and demons rip from their corpses—the children of the Red King’s witch! The story moves beyond the novel for the first time!

If you haven’t got on board this new Baltimore miniseries, you should. And read it all in one sitting too. As I said above, I rather enjoyed this one, and there’s a pretty big reason why, but I’ll have to talk about it in the spoiler-filled zone below, I’m afraid. So for now, I’ll endeavor to talk around it. It’s going to be tough though, because it was pretty cool.

We saw Juta, the witch of Harju, briefly in the last issue, and thankfully we see a lot more of her in this one, because she’s got an interesting design. It’s really showcased in the forest environment. When things go nuts and there’s wind and rain (and blood) she looks as wild as her surroundings. No, wilder, actually. Her haggard cloak is a nice touch, looking almost like bird’s feathers, making for some very fluid transformation sequences. The frames of Juta in mid transformation were some of the best in the issue.

Another chapel of bones shows up in this issue. Its design was very similar to the one seen in the last Baltimore miniseries, but this one was underground, with roots growing through the ceiling, just to make it extra creepy. It’s seen so briefly though, and I wanted to see more of it, especially the little Red King doll Juta had made. It was never seen in its entirety, and the crown was only fully visible in a single panel, so it didn’t read as immediately as I would have liked. In a slower sequence this wouldn’t have been a problem, but given that it was seen in an action sequence, it stalled the pacing a bit. Dave Stewart colored it blood red though, which helped, what with the Red King being red and all.

Speaking of red, this was a nice touch by Dave Stewart. Throughout the entire miniseries, red is only used for blood, Juta’s eyes when she’s in animal form, and the witch markings. When Juta appeared in the graveyard this issue and it began to rain blood, the color which had been used with such restraint before completely took over. The pages were soaking with red, complete with red lightning. It was a powerful device to feel the Red King’s influence on what was unfolding, even if he wasn’t really there.

After “Chapel of Bones,” I was hoping for a strong mission statement in this arc for the direction of the Baltimore series. While at first this series may have appeared an inconsequential monster-of-the-week sort of story, now that it is complete, its role it the larger scheme of things has been revealed, and it’s an exciting prospect. This story put a big emphasis on Sofia, to the point that it almost felt like her story. I even noted this in my review for the previous issue. I also went on a bit of an indulgent tangent with a theory I had about her joining Baltimore’s company. That theory turned out to be correct, though, and not just the ramblings of a mad man. And I’m glad it did because it shakes the series up.

I like Sofia. As I said in my last review, she has what it takes. And looking back through the previous issues, almost all the character moments were about how Sofia interacted with the cast. Christopher Golden was laying the groundwork for her. This whole miniseries was about building her character, and it really worked for me. I was also very glad that no one tried to talk Sofia out of joining Lord Baltimore’s company because she’s a woman. I mean, it’s 1920, so I half expected it, but when she claims the fight is as much hers as theirs, no one argues with her. She had proven herself to them already, and in their eyes she was already a soldier.

And that last panel got me really excited for the next story. When you consider the endings of past Baltimore stories, this is rather upbeat. “The Plague Ships” ended with an old lady being tortured, “The Curse Bells” ended with everyone in the local town turned into mindless husks, the short stories in the third collection ended with a woman committing suicide rather than live as a vampire, a vampire getting his bowels eaten by monsters, a young boy locked out of his family home until sunrise in case he turns out to be a vampire, vampires unleashing havoc in Verona, villagers mourning their dead after being attacked by giant crab monsters, Vanessa being killed, then Judge Duvic turning into a werewolf and killing a bunch of monks in “The Infernal Train,” and finally Lord Baltimore ripping out his own heart in “Chapel of Bones.”

So by Baltimore’s standards, this is a very upbeat ending indeed.

I’m sold on Peter Bergting. Sure he’s new to the series, but this issue makes it absolutely clear he’s got a real feel for this world. This wasn’t just a good issue, it was the right ending, strengthening the previous issues, and I finished it wanting to read more. Next month is “The Wolf and the Apostle,” Ben Stenbeck’s last Baltimore miniseries. I’ll be sorry to see him go, but I know Baltimore is in good hands now, and I can’t help being eager to see what Christopher Golden and Peter Bergting cook up for us next.

Final Verdict: 8. And in retrospect, this ending upgrades #2 to an 8 as well.