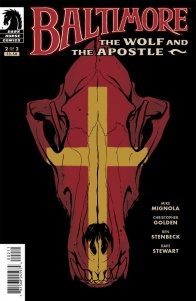 A young inquisitor who faced the werewolf Judge Duvic finds himself at the very limited mercy of Lord Baltimore.

My review for the first issue was spoiler free, but this last one will be full of them.

Back when I was reviewing “The Witch of Harju” I commented that I wanted to see Sofia Valk join Lord Baltimore and his companions in their mission. I also commented that having a priest among their number would be cool. Christopher Golden though had something better in mind; a former Judge of the Inquisition. These two stories, which will be collected together in “Baltimore – Volume 5: The Apostle and the Witch of Harju,” are tales of recruiting others to Baltimore’s cause, and make for a very natural transition from the solo book Baltimore has been the previous four volumes into a team book. “The Wolf and the Apostle” is definitely the stronger story though. Judge Joaquim Rigo’s story has a character arc drawing from the Inquisitor storyline that’s been in play since “The Plague Ships,” which gives it real resonance.

This isn’t just a story about a man fighting a monster, it’s about a man recognizing he is just as much a monster as the creature he’s fighting. The realization that all of the Inquisition Judges are wolves is a powerful one, and deciding to be better, making a conscious choice to change and be what the Inquisition should have been, a shepherd (or apostle, if you prefer), is ultimately why Rigo survived.

The those religious men that stood before Duvic and claimed the moral high were likewise destroyed by his curse as he vented his wrath upon them. Judge Rigo earned scars for his past sins, but his humility spared him his life.

I also liked that Judge Rigo’s cowardice in the first issue and at the beginning of this one came from knowing that he was no better than Judge Duvic, and if God had not protected Duvic, Rigo had no reason to think he would protect him either. His cowardice still came from a fear of pain and death, but also from the realization that his soul was tainted when he had believed it was pure. He wouldn’t just die at the hands of Duvic, he’d be damned to Hell.

And that’s also why I think Lord Baltimore’s words had a sway over him. He doesn’t come in and say, “Yep, you Inquisitor’s had it all wrong. My quest is the real deal.” No, Baltimore stands before Judge Rigo and says that he is likewise tainted, that he too bears scars of his own, that doing what must be done will be punishing, and will be its own curse, but he will do it anyway. His sentiments in that final scene echoed Judge Rigo’s own epiphany. It made Judge Rigo’s choice to join Baltimore mean something.

There were other beats in there that added to the piece in smaller ways, but that I really appreciated. I liked that Judge Yeboah, the big, muscular one that had been so sure of himself in the first issue, fled in the face of the wolf and committed suicide. In his last moments, he too realized God was not with the Inquisitors. Plus this is an issue full of great lines like, “We are each of us what He has made us. God wants us to be savages.” That combined with the image of Duvic prowling into the chapel, lost in shadow except for his eyes, teeth, and the mark of his curse, was a spine-chilling moment. The image so eloquently says what Duvic has been reduced to.

The framing of Duvic’s curse mark was very deliberate throughout. It’s a powerful visual to remind the reader what Duvic had done to become the werewolf, and mark him in contrast to Rigo in the latter half of the issue. And I can’t believe it’s taken me this far into the review to comment on Ben Stenbeck’s design of Duvic’s wolf form. I like that he found a way to put the snarling face Duvic had as a human onto the wolf, although I suppose it’s also possible he knew what Duvic’s fate was, and so when he was drawing him as a human back in “The Inquisitor” and “The Infernal Train,” he was drawing a wolf-like snarl on his face deliberately. In the few panels when Duvic was human, it was a nice touch that his whole body language had changed. He’s hunched and animalistic, no longer tall and proud. In fact, the one panel when he does stand tall and proud like his former self is when he reverts back to his wolf form.

I don’t know if Duvic survived this story. We never saw a body, and he was certainly still alive in the last panel that we saw him, but I think it’s safe to say we’ve seen the last of him for a while. Ben Stenbeck got to introduce Duvic, and he also got to say goodbye to him. It’s an appropriate bookend to his run. If you’re going to bow out of a series, this is how you do it. He left Baltimore on a high note. This is my favorite story in the series so far.

Right now the Baltimore series is in a state of transition from a solo book to a team book. Usually transitions are rocky, but not so here. It’s on sure footing, perhaps on surer footing than it’s ever been. I’m going to miss Ben on this title, but I can’t feel too bad about it when I know he’s going on to Frankenstein Underground and Peter Bergting is showing so much promise. This story simultaneously makes me lament the end of an era, while eagerly anticipating the next.