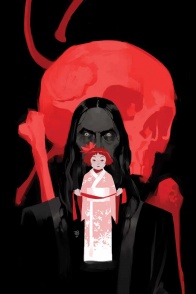 Before she became Lobster Johnson’s greatest adversary, the Crimson Lotus was a young girl whose family was caught up in the Russo-Japanese War. Thirty years later, the Lotus exacts her revenge with terrifying international effects, and two spies must try to chase her through China before they become flies in her web.

Mark Tweedale:A staple of the Hellboy Universe publishing lately has been the one-shot miniseries, and common among these are prequel origin stories. We had “Rise of the Black Flame” in 2016, “Rasputin: The Voice of the Dragon” in 2017, “Koshchei the Deathless” in 2018, and now “Crimson Lotus.” Each of these stories have ventured into uncharted territory, visiting eras we’ve never seen before, introducing characters we’ve never met before—a lot of world building goes into these stories. Even when dealing with familiar characters, like Trevor Bruttenholm in “Rasputin,” we’re seeing them at a different period of life than we’ve ever seen them before. There’s often a lot to introduce, and sometimes these stories struggle under the weight of that, especially in moments that try to reinforce connections to the Hellboy Universe as a whole.

Going into “Crimson Lotus,” there are very few familiar characters to latch onto, more so than any of the other aforementioned titles. John Arcudi seems to relish how distant “Crimson Lotus” is from its surrounding universe, to the point that the connective tissue is almost incidental. Plus we know so little about Yumiko Daimio (AKA the Crimson Lotus), this miniseries lacks that “Oh, I know where this is going…” prequel feeling, which is refreshing. As much as I loved “Koshchei the Deathless,” even it had significant portions where the story was clearly on rails. “Crimson Lotus” is free to forge its own path.

Christopher Lewis: Agreed, and the lack of connectedness/prequel feeling is something that I am truly loving already. Out of the gate “Crimson Lotus” feels like a supernatural, spy/mystery story, with the Crimson Lotus along for the ride. In fact the premise reminds me a lot of “Rise of the Black Flame” in that there is a mystery being investigated by authorities as the primary plot line, and the secondary plot line is growing the background of titular character.

Mark: I don’t suppose this is a spoiler since it’s on the cover, but there’s a Rasputin link here too, so it’s not like there aren’t connections, but I don’t think there’s anything at all here that requires prior reading. I feel like you could pick this up with complete ignorance of the Hellboy Universe and it wouldn’t dampen the reader’s experience at all.

In terms of visual cohesiveness, Mindy Lee’s art is an excellent fit for the Hellboy Universe. I could see her work fitting very comfortably next to someone like Gabriel Bá. And that’s exciting for me, when a new artist hops onto these books and just fits. One issue of her work and I’m already hoping she’ll be doing more beyond “Crimson Lotus.”

Chris: This is my first experience with Mindy Lee, and yes she definitely is a good fit for the Hellboy Universe. I like her line and wash work. Sometimes it is very defined and other times it is more loose. I am also loving Michelle Madsen’s colors and they way they compliment Lee’s work. Here’s a great example of Lee’s more loose lines and Michele’s fantastic colors. The lines aren’t always uniform or straight, and mixed with Madsen’s colors give a very surreal feel to 1930s China.

Mark: Lee’s certainly capable of altering her linework drastically to fit the mood of a scene. Just look at the office scenes—so restrained and uniform—but then look at a scene with a monster in it and everything changes—the lines become wilder and heavier, the shadows almost seem to bleed ink. Seeing stuff like that makes me excited to see what she does with the Crimson Lotus. After all, stories with her in them generally tend to demand big visual moments.

I love the way she uses shadows to maintain scene direction too. You can see in the chase sequence in the middle of the book, the shadows create a clear progression throughout the sequence, with the characters moving forward toward darkness with light behind them. Lee uses this to maintain spatial relationships so that you can tell where in a scene a character is looking without having to show the object they’re looking at in the same panel.

We’ll dig into the plot in the next issue since we’re keeping this review spoiler free, but I did want to mention how effective the opening sequence was. It provides a clear emotional core for the story to follow, and it hangs over everything.

Chris: Right on. I am going to give this one an 8. John Arcudi has set the stage for our story perfectly, and I am loving Lee’s art with Madsen’s colors. Looking forward to the next issue.

Mark: I’m going with a 7. The series has a strong hook, but the second half has a lot of set-up to get through. With the groundwork laid here, I expect a stronger second issue.