In “Crimson Lotus” #2, artist Mindy Lee gets to dig into an action set piece—an excellent way for Agent Dai and his associates to test their mettle. 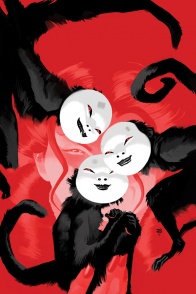 Secret agent Dai and the man he is protecting take a tumultuous train ride across Japanese-occupied China only to be faced with new allies… and new enemies.

Mark Tweedale: With all the grimness unfolding in the pages of “B.P.R.D.: The Devil You Know” and the looming threats of “Hellboy and the B.P.R.D.: 1956,” “Crimson Lotus” is a welcome change of pace. Yeah, there’s monsters and spooky evil, even a bit of gore and death, but it’s more in the vein of a “Lobster Johnson” tale. Agent Dai, despite the peril he’s in, has a playful energy to him which keeps “Crimson Lotus” from wallowing in its darker elements.

Christopher Lewis: When reading this issue I felt like I was reading a James Bond-esque story set in the Far East with a little bit of witchcraft. The “little bit” is important because it allows for good balance between the Agent Dai and Crimson Lotus storylines. Honestly, I really don’t think there is another Hellboy Universe story quite like this one with the playful energy you mentioned, which is making this a fun read.

Mark: Yeah, and it’s wide open too. These characters and this part of the world have barely been explored, and even the Crimson Lotus herself is largely unknown. It’s free to go almost anywhere. Like “The Rise of the Black Flame” and “Rasputin: The Voice of the Dragon” before it, “Crimson Lotus” is holding back its villain. While that worked for the Black Flame and Rasputin, I’m hoping the Crimson Lotus gets to go nuts in later issues.

Chris: I think holding the villains back in “The Rise of the Black Flame” and “Rasputin: The Voice of the Dragon” worked because they were already well established characters and readers didn’t have as many questions about them. The Lotus and her abilities are barely known outside of a couple Lobster Johnson stories, so I don’t think keeping her in the background will work long-term. Especially since part of the draw of this series is to learn more about her. Knowing Arcudi’s work, I am sure he will give us a big payoff in a later issue.

Mark: Especially after “Lobster Johnson: Mangekyō,” which had such a spectacular sequence with the Crimson Lotus (drawn by Ben Stenbeck), I can’t help expecting something big from her.

Chris: Another thing I have been enjoying with this series is the significant contrast in tone between the Agent Dai and Crimson Lotus storylines. The Lotus story is always in the dark with slow pacing and with little or no dialogue giving an ominous tone. Everything with the Agent Dai storylines has been fast paced in the daylight with a lot of bystanders and a lot of dialogue. Basically these two plot lines are antitheses of each other and the back and forth between the two keeps the overall story engaging.

Mark: If I had a quibble, it’d be that Dai talks to himself a bit too much, but even that is part of its charm too. The only moment it jumped out as being odd, was when the train went into the tunnel. The dialogue is too long-winded for the sequence of events, slowing down an action that would otherwise read very quickly.

Chris: I felt the same thing about that part of the story. The thing that kept the dialogue from pulling me out of the story was Mindy Lee’s art. She is really killing it.

Mark That she is. And she has good instincts for action too. In this issue we’ve got a sequence with characters split up, Dai on the roof of the train and his two companions in the carriage, pursued by guards. It’s supposed to be a dramatic sequence, so it’s expected to lean towards dramatic panel composition, which Lee does, but she does so with restraint too. See the other aspect of a good action scene is the pacing, and as she intercuts between the roof and the interiors, she has to quickly establish the locations and how the situation has changed since we were last in this location. Lee does this quite simply—by not changing the panel composition. She re-uses panel compositions so we recognize the it immediately and focus on the actions of the characters.

It’s a really basic thing, but I see a lot of comics that don’t do this with intercutting scenes in action sequences, and it slows down the readability of the action. Lee’s action is brisk and flows—she knows when to be dramatic and when to rein it in too.

Chris: Something else about her art is she used a lot of dark shadows in the train car scene that helped with the tone that Baolu and Dai were trying to keep low profiles. Like they were hiding in the shadows, which worked well. However at the same time this was negated by the flamboyant clothes Dai and Baolu were wearing. You are going to stick out when wearing a bright plaid green shirt or a white suit.

Mark: I don’t think Dai’s ego would let him blend in. He likes to stand out.

What’d you think of Shengli, by the way?

Chris: I really don’t know what to think about her yet. We’ve barely been introduced to her, but it is obvious that she has high confidence and is a strong woman. The thing I noticed the most is her chemistry with Dai. When they are together they come off as if they are trying to impress each other. I am not sure if it is attraction or something else, so we will have to wait and see how their relationship develops.

Mark: I have a suspicion that Shengli’s the real main character.

Chris: That’s an interesting theory. Let’s grade this one. I am going to give it a 7.5. It was a fun read with good energy, and Mindy Lee’s art is pretty fantastic.

Mark: I agree. I’m having fun with this, but for the most part it’s pretty light so far. The Crimson Lotus still exists on the periphery of her own miniseries, and until she steps into the thick of it, the series can’t truly go nuts the way I’m hoping it does. But this is only issue #2. We’ve got plenty of time for bigger things yet.

Final verdict: 7.5 – “Crimson Lotus” #2 ups the action, but keeps the Crimson Lotus herself out of it, operating from the shadows for now.