This week is a big one for Mike Mignola fans – the start of a brand new “B.P.R.D.” arc that has your friendly neighborhood Mignola obsesses giddy. Let’s get to it! 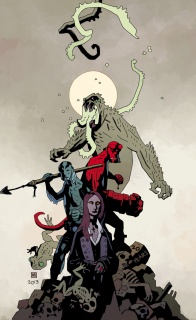 Two B.P.R.D. teams make their way through the monster-filled streets of a Manhattan wasteland in order to reach the Black Flame’s fortress and take down his army.

Brian: The great James Harren is back, and he is bringing us a view of the devastated wasteland that is New York City in “B.P.R.D.” #115. We had the privilege of seeing some of these pages early, and as stunning as they were in black and white, seeing what Dave Stewart did to them really hit it out of the park. What was your initial response to this issue?

David: Well, I don’t know what you read, but I had read a colored version of this before!

Either way, my initial response to this issue is that it’s the beginning of one of the all-time great B.P.R.D. arcs. I really, truly believe that. It’s the first time in a while we’ve had a full squad on a mission, and we even have the Russians involved with Iosif and the mega creepy Leonid. This issue, more than anything, is laying down the groundwork of what’s going on in NYC while figuring out how each of the characters play off of each other with new members added. Giarocco and Iosif banter like Ross and Rachel, Fenix is shockingly capable now that she is listening to and enhanced by Panya, and Liz has taken on a minor leadership role especially in the eyes of B.P.R.D. veteran (although in his first appearance) Tian. Throw in some general suspicion – mostly from “Fee” towards Johann, and this is really setting the stage for a lot of fireworks, character based or otherwise.

Throw in apex level James Harren, man, and it just gets unfair. This is a simply great comic.

Brian: I honestly don’t know where my mind is, but I could have sworn it was black and white! Anyway…

I could not agree more – this felt like the first act in a truly exciting story, and one I cannot wait to get more into.

Let’s talk James Harren. Sorry, James FREAKING Harren. This issue is a masterclass in how to do a few things, visually. First of all, he draws one of the most authentic New Yorks I have seen in a very long time – little touches like the ramps at Port Authority looking correct and the view from the Williamsburg Bridge make this NY-area native swell with pride. Outside of his area-specific skills, he just flat out crushed this issue. The scene in the Lincoln Tunnel right out of The Stand, the absolutely heartbreaking scene in Prospect Park, the walk over the bridge; his scenes were both beautiful and terrifying.

We’ve both been big Harren fans for a long time, but this issue is some next level shit.

David: Yeah, isn’t one of the craziest things about Harren’s work the fact that he’s still so new to the comic art game? If he looks this good two years after we first became familiar with his work, what’s he going to be like in five years? The thing that astonishes me is how incredible his storytelling has become. He’s always been someone who can make monsters and action work better than damn near anyone, and he’s had a preternatural ability to tell stories, but man, moments like when everyone was approaching Prospect Park as Johann waited at the top step? Anything could have been up there, and it speaks to everyone’s skill that nothing would have surprised us.

Then, the sheer heartbreak and horror of what was there…that was worse than any Ogrdu Hem could have been.

Let’s talk about the cast. One issue in, do you feel like the new full cast is overwhelming or just right?

Brian: The cast is large, and that does present some problems, but more than feeling overstuffed, it feels more like there is a clear “A” team (Liz, Fenix, Johann) and a clear “B” team (Iosif + Howards). I am hoping that some of the newer characters like Enos and Gervish don’t wind up being cannon fodder, because that would be a major step back in the development of the reconstituted Bureau.

I was going to say that “B.P.R.D.” is on a real hot-streak lately, but then I thought back and realized that the hot streak has been going on since 2012, more or less consistently. Sure, some of the side books haven’t been as universally great, but has there been an arc of the main series since, maybe, “The Devil’s Engine” that wasn’t top quality, amazing stuff?

David: Well, a lot of that depends on your thoughts of “The Abyss of Time”, an entertaining story that also had James Harren art but ultimately was really weird and incomplete feeling, but “Wasteland” really brought that puppy home. So yeah, this book is on a hell of a hot streak, and everyone is completely on point here.

Did you think Liz and Fenix’s relationship was casual too fast? It seemed a little strange that Liz was already dropping “Fee” like they had been BFF’s for 115 issues. I liked it a lot, and it makes sense that they would become friends, but it seemed a quick leap from them meeting last issue.

Brian: I can see that, but I also think that extreme circumstances speed up most relationships. The friend you make in college, when you’re in a new place, surrounded by the unfamiliar, gets to know you a lot faster than the new kid in your 10th grade English class. Liz’s return to a weird, broken down Bureau + road trip + apocalypse + Fenix having visions of Liz = “Fee.” I’m ok with it.

David: Yeah, I can dig it too. I don’t have a substantial issue, and I like the college analogy.

Last question, and we talked about this before, but Johann disappeared at the end when he was on watch, and everyone seems generally suspicious of him. What do you think is going on with Johann? Does he just have a little bit of sad going on, or is this something bigger and darker?

Brian: You know, I actually dug out some old issues last night, trying to pinpoint when it was that Johann first started to act weird, and I think it correlates with him getting his new containment suit. If memory serves, that suit was given to him by the Russians – could it be more than just a containment suit? Could it be affecting his personality, too?

David: Well that was also the same instance when Johann got all up in an Ogrdu Hem’s business to win the day, wasn’t it? Maybe it’s not the Russians. Maybe he’s influenced by something else entirely.

But I’d buy into either one of those ideas. He still seems like Johann, but not.

Brian: Yeah, something is definitely off there.

One last note before grading: I didn’t expect Liz to jump back in so gung ho to the Bureau, did you? She was gone for so long and now, BAM, she’s back in the middle of everything. I’m not saying this is a good thing or a bad thing. Rather, just an unexpected thing. Do you agree?

David: I did think she would, actually. The thing about the “Lake of Fire” arc is she was clearly inspired and focused again. She seemed like a woman on a mission, and I don’t think that mission was clerical work. Plus, she took a SWAT team member’s cigarette and took on a massive monster in solo combat two issues ago. She’s not one for shying away from battle.

Unless you have anything else, I’m curious what you’d give this bad boy. Grade it!

Brian: At the risk of sounding hyperbolic, this is a near-perfect issue. Any questions we’ve raised have been plot-centric, not quality-centric. This seems like a 9.0 comic to me. You?

David: Agreed on the grade, agreed on most everything. The good thing about these questions is they make us want to find answers, and those are the good kind. I’m all in on “Reign of the Black Flame”, and I just hope our favorite characters survive the trip.