Here we are: at the end of the inaugural “Hellboy and the B.P.R.D.” arc. Do Mignola, Arcudi, and Maleev knock the finale out of the park? Find out below! 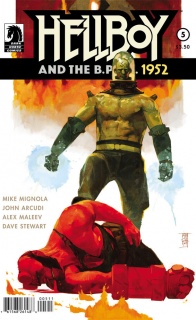 Hellboy discovers the terrible truth of the Portuguese fortress, the murders in the village, and the man behind it all. But will he be able to save his fellow agents from the monsters and madmen?

Brian: Well, David, here we are at the end of yet another B.P.R.D. adventure, and this issue had it all: heads popping off, giant monsters, Varvara, everything. What did you think of the conclusion to the first “Hellboy and the B.P.R.D.” arc?

David: I think more than anything this made it abundantly clear that it is a natural progression of 1946 and 1947 than the other issues had. It may not have Ba and Moon, but it is like those series but with Hellboy taking the spot of Bruttenholm.

And while I loved Varvara’s part, I did not love this issue. In fact, the whole initial section with Von Klempt could not have moved me less. I just don’t really see the point of that whole storyline save for as a coming of age tale of sorts for Hellboy. Am I missing something there?

Brian: That’s a really interesting interpretation of the ’46/’47 connection. I like that. This is why I love doing these with you, as you state things in ways I would never think to myself.

Where we disagree is on the Von Klempt front. Sure, this wasn’t the most compelling Hellboy story ever told, but I think the purpose of this series is to give us stories that help us understand the Mignolaverse a little better, both through exploring the characters in a deeper way, and by telling little stories that fill in some gaps. To me, this story did both: it gave us Hellboy’s first mission, gave us an interesting look at Varvara, and helped establish some of the ‘classic’ agents as not just names in the history books.

What was it about the Von Klempt part that didn’t sit well with you?

David: I think part of it may just be how it worked as a monthly, and it would likely work better in collected format. The open with the zombie/whatever being watched by the monkeys just didn’t connect with me. What was going on with that? In fact, what was Von Klempt’s plan even? Was he making super soldiers? Or monkey soldiers? I guess the ultimate point didn’t connect with me. I liked the Archie and Hellboy business and getting the shot of Hellboy doing his thing – although I don’t really understand how/why Archie’s photograph of Hellboy would have ended up on the front page of a newspaper – but it didn’t really offset how flat the whole Von Klempt plot fell for me.

So I’d say I enjoyed about half the issue, but not the half that was for all intents and purposes “the plot”. I think that was secondary to giving Hellboy a mission to get his feet wet, but it just didn’t have any of the intrigue the earlier issues had. It reminded me – and I don’t make references to this often – of an episode of “Family Guy” when Peter and Lois are offered either a boat or a mystery box in a timeshare deal. Peter freaks out and is desperate to take the box, sharing with Lois, “we don’t know what’s in the box, Lois! It could be a boat!” Earlier on in the mini, I was excited by the mystery of the box and what it could offer. By the end? It was just another damn boat, Brian.

Brian: I guess I understand that, but I enjoyed the Von Klempt part a lot more than you did. From what I can gather, he was trying to make both super soldiers and super monkey soldiers because, let’s face it, you can’t have enough super soldiers, simian or human. At least that’s the expression ’round the Salvatore house.

David: I think it was just supposed to be an entertaining yarn about Hellboy’s first mission that worked in Von Klempt and Varvara as they both are factors (to a degree) in the present story lines. That’s about it. I just think it regressed as the series went along. It started VERY strong but the more that was revealed, the less I cared about the story. But as we’ve discussed before, that’s often the nature of these Mignolaverse five part arcs. I always feel they peak early.

Brian: That’s fair, I suppose. I don’t disagree about the peaking early, but I think this last issue was the best since #2, so it somewhat redeemed itself at the end.

One that that has been consistently great since the mini started was Alex Maleev’s art. As we’ve said in the past, the boy’s got more than a little Mignola in him and, for some reason, whenever he’s drawing Nazi stuff it really comes out. I particularly enjoyed his giant monster that popped out of the floor, as I tend to enjoy giant monsters. I’m weird like that.

I was also quite impressed by the way he was able to, with very subtle facial expressions, represent a youthful Hellboy. He’s not the easiest character to show differently throughout time, but Maleev manages to offer a little more naivete to Red, and I appreciated that quite a bit.

David: While I think he’s often fit into the school of artists who rose to fame at least in part to street level Marvel and DC in the 00’s – Michael Lark and Michael Gaydos are two contemporaries many would think of, I’d say – I’d actually compare him more to an unexpected artist: Stuart Immonen. Not stylistically, of course, but in the sense that both of them can subjugate their art to fit any type of story. While he’s not quite at Immonen’s level in that regard, I do think something like this shows that he can somehow find a middle ground between the work of Mignola and a Guy Davis and mine that fertile territory for some stunning visuals. And that’s not something we see out of his most popular work. I don’t think Mignola, Arcudi and Allie went to Maleev went to him and said, “we want you for this book but we want you to make your art look like this.” I just think Maleev is good at melding his style to the greatest needs of a story, which is why he was far and away the best part of this mini-series.

And he can draw some wicked great monsters. I personally loved the expressions of the smoking monkey, as well. I just got the impression when reading the comic that Maleev was smiling while drawing the monkeys while repeatedly saying “this is great.” This may be me displacing my emotions on his work, but I feel like this type of project is fun to Maleev.

Anything else you want to tackle before we grade this issue?

Brian: I’m shocked that you don’t want to discuss the Varvara stint at the end – it’s like I don’t even know you any more!

David:< Well I did talk about her a bit! There's just not much to say. She righteously lit a traitor on fire for him speaking unkindly of her favorite human. That's just Varvara doing Varvara. Get it girl! You do your thing!Side note: do demons such as Varvara have genders? She's a she in the sense that she's basically a creepy porcelain doll come to life, but is she a "she" in any sort of way besides the fact she happens to be Airbnbing a little Russian girl's body? This is why I don't talk about Varvara all the time. The mind wanders...Brian: Classic Varvara!

And I would think that they have genders as, for instance, Hellboy’s father is a demon, and Azzael impregnates Sarah Hughes, which is a straight up dude move.

Don’t hide this inquisitive side under a bushel basket, David, embrace it!

David: I’ll give it a 6.5. It’s not a bad comic by any means, I just felt it was an underwhelming finale that happened to have phenomenal art.

Final Verdict: 7.25 – Beautiful to look at, with mixed results on the writing side