Hellboy and the B.P.R.D. returns with this double feature issue. 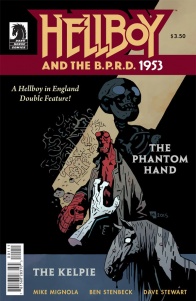 Hellboy’s first experiences with Bruttenholm in England involve the phantom hand of a murderer and a demonic water spirit in stories reminiscent of the early Mignola masterpiece “The Corpse.”

Ben Stenbeck’s had a great year, hasn’t he? First Frankenstein Underground, and now a bunch of Hellboy and the B.P.R.D. short stories. I loved him on Baltimore, but it’s great to have him back in the Hellboy Universe again, doing wildly different things.

1953, for those of you that don’t know the significance of the year, was when Hellboy went exploring the British Isles with Professor Trevor Bruttenholm and Harry Middleton. It’s a period of his life he looks back on fondly.

1953 features a carefree Hellboy, happy before the weight of his destiny settled on his shoulders. We got to see a bit of that in 1952, but mostly that story was about him being the new guy and trying to find his place; he was awkward, a bit unsure of himself, and worried about screwing up. In 1953 Hellboy’s more relaxed, and he doesn’t hold back on his impulses as much.

Stenbeck captures this really well. Hellboy is unmistakably Hellboy in both appearance and mannerisms, yet Stenbeck’s played with his body language a bit, bringing out a more youthful side of the character.

Story wise, the issue is appropriately light. Given how heavy B.P.R.D. and Abe Sapien are at the moment, this pair of stories is a welcome change of pace. One of the great joys here is the relationship between Hellboy and Bruttenholm. Over the years, there’s been all these stories where Hellboy casually mentions, “Oh yeah, I was here before. The Professor and I ran into a problem with witches …” and that’s it. In over twenty years of the comic, we’ve never really seen Hellboy and Professor Bruttenholm in the field together. It’s something I’ve wanted to see for at least a decade now, and so this issue was very much wish fulfillment.

I loved seeing this disapproving yet proud side of Bruttenholm. I loved seeing Hellboy feel like he has these expectations to live up to and being kind of awkward and excitable. And I love all the opportunities for humor the contrast between Hellboy and Bruttenholm creates. Mignola takes full advantage of the contrast too. I laughed quite a few times, especially in the first story, The Phantom Hand.

1952 was great way to kick off Hellboy and the B.P.R.D., but I think this issue gets to show off more of what makes the series distinct from Hellboy and B.P.R.D. Having Bruttenholm in the mix changes the dynamic of the story in fun ways.

But, this is Mignola we’re talking about, there’s a darker side too. Hellboy may be carefree, but Bruttenholm isn’t. It’s not just that he’s the director of the Bureau. His adopted son is half demon, and Bruttenholm clearly bears that weight so that Hellboy doesn’t.

Which brings me to The Kelpie, a flashback tale to Bruttenholm’s youth, a tale when Bruttenholm was still carefree until … well, you’ll see. Again, it’s a nice moment of contrast between Hellboy and Bruttenholm.

This pair of smaller stories probably aren’t going to shake your world. They aren’t going to keep you awake at night wondering what will happen next. But they’re solid fun, and they shine some light on an extremely important relationship for this series, one that I’m excited to see grow throughout the ’50s and on into the ’60s and beyond. It makes me want to travel into the future so I can read a decade’s worth of Hellboy and the B.P.R.D. omnibuses.

Plus I’ve missed these short stories. I guess the last one was only back in March, but it feels so much longer than that. Good news though, there’s plenty more on the way. Next month there’s a Hellboy in Hell story in Dark Horse Presents and two more tales from Mignola and Stenbeck in 1953 #2, then three short stories in January’s Hellboy Winter Special. I pretty happy about that.

If only Hellboy and the B.P.R.D. was a monthly series …