‘Beyond the Fences’ wraps up in a way that left me desperate for more “Hellboy and the B.P.R.D.” Bloody hell, this was an excellent debut from Christ Roberson! 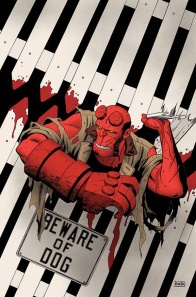 This is a difficult issue to talk about without spoilers. I mean, the way things were left at the end of issue 2, the first half is a big action sequence, and the latter half is all spoilers. So all I’ll say is simply that this issue continues the high standard of storytelling employed in the first two issues and ends well.

And now the spoilers begin.

I have to say, I feel kind of bad for the monster in this one. I mean, as monstrous as it had become, there was still a pet dog under it all. I know there was no saving it, but I still felt bad for it. I felt especially bad for Julian Boucq. The kid lost his father and his dog in the same day.

I appreciated that look from Hellboy at Julian and his mother in their sorrow. Hellboy saved the day, but there’s nothing he can do about this. Nothing more than that was made about the moment, but to me it felt like enough to know that Hellboy was thinking about it.

This further story further establishes Hellboy as an American icon in this world. After all, in ‘1952’ Hellboy saved everyone from Nazis, and now in ‘1953’ he saves an American suburb from a monster. Both events would have received a lot of media coverage, so it helps sell how Hellboy was embraced in the ’50s despite looking like a demon. He needed these public moments.

I also liked a brief moment from Stegner, when he says of Hellboy “He’s got it under control.” It means a lot coming from him, because Stegner’s been a bitter cynic since we first met him in “B.P.R.D.: 1947”. It’s a little thing, but I was really glad it was there.

However, it’s likely Julian would have died if everything had been left to Hellboy alone. Luckily a wolf showed up at just the right moment… or should I say Miss Fox? Or Special Sciences Service Agent Rahel? Is there any question she was the wolf? I didn’t think so, but I guess it was never made explicit. Of course, she didn’t have to save Julian, so right away Rahel can’t simply be painted as a villain. Her partner, Valentin Moravec, strikes me as a more clean cut villain for now. He had no problem killing Dr. Boucq, and as he admits himself, he’s had his fill of order and tidiness—he prefers a little chaos.

For me, the most fascinating moment came from Susan Xiang’s vision while gathering a sample from Buddy’s rapidly decaying corpse. Again we see the strange Cthulhu-like statues previously seen in “Witchfinder: Beware the Ape”, “Lobster Johnson: Tony Masso’s Finest Hour” and “Hellboy and the B.P.R.D.: 1952”. We also see a mysterious man in a hat and trench coat with a strange cuboid object. Personally, I think this guy is the alien from “Hellboy: Conqueror Worm”—the cuboid object certainly seems to be the same as the one he gave Hellboy in that story. C’mon, aliens! That’d be awesome! The last vision is Hellboy fighting Agent Moravec. This one’s not so surprising though.

Either way, this story is setting up a lot for the future, while also making numerous connections to the past. I’m still curious as hell about the Enkeladite. And I liked Moravec’s allusion to the growing animosity towards Varvara at the S.S.S., which connects nicely to the flashbacks seen in “B.P.R.D. Hell on Earth: A Cold Day in Hell”. It seems likely “Hellboy and the B.P.R.D.” will be dealing with those events directly at some point.

One thing that does worry me is the possibility that Agent Rahel is contaminated. I mean, she bit into Buddy’s neck, and a whole lot of that green goo/blood came out (which looks a hell of a lot like the goo oozing from the Cthulhu-like statue in ‘1952’. I wonder what sort of effect it would have on a human?

I suppose what I’m getting at overall is that Chris Roberson has put a lot of cards on the table in a mere three issues, and he clearly has several long-term plots in play already. This arc isn’t just an great side story, it’s an essential read.

Paolo Rivera was excellent throughout this arc. I talked a bit about his approach to characters and body language in my previous reviews, so I’ll just say I hope he comes back for more, especially a story where he gets to play in the shadows more. Throughout this arc, whenever a moment for shadows popped up, he always did something interesting, and I’d love to see what else he can do.

As a spin-off, “Hellboy and the B.P.R.D.” is fascinating to me. I love the way Mignola’s “Hellboy” spin-offs is the way they feel like a Mignola story without actually being one. Mignola wouldn’t write and draw a story set in suburbia, that environment just doesn’t interest him. However, “Hellboy and the B.P.R.D.” can totally do that and in a way that sits naturally side by side with the rest of the universe.

I wonder what’s ahead in 1954? That’s year Hellboy fought Saint Leonard’s dragon for the Osiris Club in “Hellboy: The Nature of the Beast”, so maybe we’ll get a tale connected to that.

Final verdict: 9. This was an excellent Hellboy Universe debut from both Chris Roberson and Paolo Rivera.

Free Comic Book Day is nearly here. Don’t forget to pick the Serenity/Hellboy/Aliens issue, featuring Hellboy and the B.P.R.D.: 1954—The Mirror written by Mike Mignola with art by Richard Corben.