‘1956’ takes the plunge into the espionage of the occult cold war. Unlike previous “Hellboy and the B.P.R.D.” stories, there isn’t any paranormal threat at play here (at least, not yet), which could be a risky gamble for a series about a paranormal investigation agency. Does it pay off? (Spoilers ahead.) 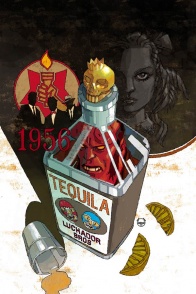 Professor Bruttenholm sends two agents in opposite directions on off-the-books missions, while the B.P.R.D. loses sight of Hellboy as he wanders through Mexico, and Varvara’s pet projects stir up discontent among her team of occult scientists.

Mark Tweedale: I really enjoyed this issue. It’s taken a while for the espionage story to get rolling (it’s been bubbling in the background since ‘Beyond the Fences’), but now that it’s finally stepped up and become the primary focus, I feel like it’s working a lot better, especially since the B.P.R.D. agents can engage with this plotline in a more direct fashion and take an active role in it.

Christopher Lewis: For sure. I also feel it’s working because we are seeing more character moments than we have in the past stories. When I think back to ‘Occult Intelligence’ it was held back due to cramming a lot of information about the espionage storyline into three issues, which didn’t give much time for the characters. Here the espionage story is still key, however everybody is taking time to breathe and reflect on the stress of life.

Mark: Yeah, all the stuff with Bruttenholm, Margaret, Archie, and Stegner is working for me, progressing the story while pivoting on character relationships.

Chris: It’s been refreshing to read this story, or should I say these mini-stories.

Mark: At this point I think of it as just one story. Sure, there’re different artists on different plot threads, but the way these threads weave into each other and are dependent on each other unifies them. In particular, Mike Norton’s pages feed directly into Yishan Li’s, and then Li’s feed into Norton’s. In the first issue it was easy to believe they could be separate—the transitions to different artists was non-existent—but this second issue’s integrating scenes by different artists on the page turns.

Chris: Norton and Li’s sections worked perfectly with each other. The transitions back and forth were beautiful and so smooth that they were only noticeable in the aspect of changes in tone. Norton’s lines mixed with the narrative and Dave Stewart’s darker colors gave the feeling of stress for Bruttenholm when side-by-side with Li’s softer lines mixed with Stewart’s brighter colors, which emoted a feeling of serenity. I was really impressed.

Mark: We didn’t include it in our final review for #1, but you actually questioned the “three stories” description used in the solicitations, and I’m inclined to agree with that line of thinking. Although, if marketing wants to sell three artists in a paragraph, I can see how saying “three stories” expedites the process, even if it isn’t entirely accurate.

Chris: Yeah, I initially assumed that the Hellboy and Bruttenholm plotlines were separate as they seemed independent of each other. After reading this issue, I am starting to see how the two are connected. It’s not obvious, but I think the stories are connected through Bruttenholm’s apathy to Hellboy being M.I.A. in Mexico, which is rather surprising. I guess it makes sense though when you think about the weight of what he is investigating. Also, there is no need to retell a perfect story like “Hellboy in Mexico.”

Mark: Honestly, Bruttenholm has got so much on his plate right now, I don’t think he has time to deal with it.

I’m curious what the highlight of this issue was for you. For me, it was the scene with Stegner, a conflict that’s been brewing since “B.P.R.D.: 1948.” Essentially it’s just a conversation, but Bruttenholm and Stegner really lay their cards on the table here in a way that neither of them normally do. That honesty automatically upped the stakes. Returning to the issue later, I even found I liked it more the second time.

Chris: Stegner was mine too and for all of the same reasons.

The second highlight for me was when Margaret snapped on Bruttenholm for not informing her that he sent Susan on a personal assignment. Since Margaret was introduced in “B.P.R.D.: 1947” she has always been a person to whom Bruttenholm has confided in on a personal level when things went awry. Additionally, since Bruttenholm trusts Margaret and thinks of her as a rock, he feels like he can delegate anything to her, which in this case is running the entire B.P.R.D. Where Bruttenholm is failing is that he is so preoccupied with uncovering the what the government is doing with enkladite that he hasn’t noticed Margaret is struggling with the weight of her new responsibilities.

I can only imagine how she feels being a secretary that is now completely in charge of operations and when she needs support from the director of the B.P.R.D. he is unavailable due to being preoccupied with his vaguely described “personal projects.” The change in her temperament in these last few issues has been telling and I hope that Trevor doesn’t lose his support system due to neglect.

What was your take on the Michael Avon Oeming’s section? I thought the narrative itself was an interesting progression in the Varvara story, but found since the Norton and Li sections complimented each other so well that the transition to Oeming’s section came off clunky.

Mark: I can see why you’d feel that way. The visual style is starkly different with a much more cartoony leaning. It requires the reader to kind of switch gears in terms of the way they read the comic that’s much more pronounced going from Norton to Oeming than Norton to Li or vice versa. It didn’t bother me though. This plotline’s set in Russia, there’s the black gutters, the exaggerated proportions… it revels in being different and I’m enjoying that. Plus it was great to finally see that iconic scene of Varvara burning one of the S.S.S. guys we first glimpsed all the way back in “B.P.R.D.: Hell on Earth—A Cold Day in Hell.”

We should probably get to grading. How’d you find this one?

Chris: I am going to give it an 8. I was highly impressed with the transitions and the marrying of the Norton and Li storylines. Also, the character moments gave the story a lot of depth. The only hold back for me was the transition to the Oeming section, which is why I didn’t give this issue a higher rating.

Mark: I’d agree with 8. In the past we’ve had a few stories somewhat hamstrung by setting up the occult cold war plotline, so it’s very satisfying to feel things clicking into place. If you look at this issue purely in terms of scene structure, it’s almost wall to wall conversations, and yet Roberson makes it all work. There’s a nice build of tension throughout which left me impatient for #3.

Final verdict: 8 – Despite being an information-dense issue, the focus on characters keeps ‘1956’ #2 tense and engaging throughout.