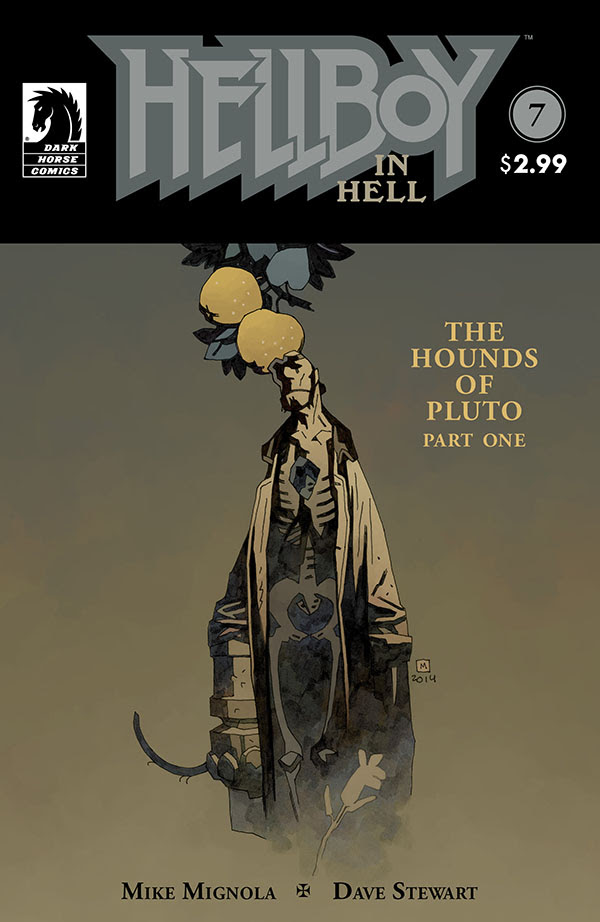 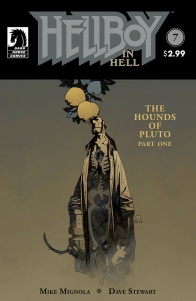 A sickness eats away at Hellboy. Though he’s dead, he risks losing himself and becoming one of the hollow phantoms that haunt Hell. A team of doctors promise a cure, but they need something from him first…

An issue of Hellboy in Hell is always special. We only get a few each year, so it is something to savor. However, in this case, it is even more so. In particular, there’s a sequence in here so visually stunning, words cannot do it justice. It simply has to be seen to be believed. Mike Mignola and Dave Stewart work magic on those pages… and given the subject matter of the sequence, that’s extremely appropriate. This is Hellboy at its most dreamlike.

There’s more to these pages than just beauty though. The imagery surrounds revisiting major elements of the Hellboy Universe’s mythology, and a relationship I’ve been wanting to see again for quite some time. It is a haunting and melancholy character moment… and I can’t say any more than that. I did, after all, say this would be a spoiler-free review. I fully intend to keep my word, though I would relish the opportunity to talk about the details of this issue. (There is a preview out there for those that want to take a peek at what’s ahead, though I’d advise you not to read the text.)

This issue, the first of the two-part Hounds of Pluto arc, is an odd mix. That may seem a strange thing to say, but it’s true. Perhaps the most odd thing about it is that it works fantastically well, though by all accounts it probably shouldn’t. Take a look again at the cover for this issue. It’s such a somber image, so still and chilling. Hellboy has been dead a while now, but he’s never looked as gaunt and faded as he does there. Now look at the cover for the next issue, the second part of this story. 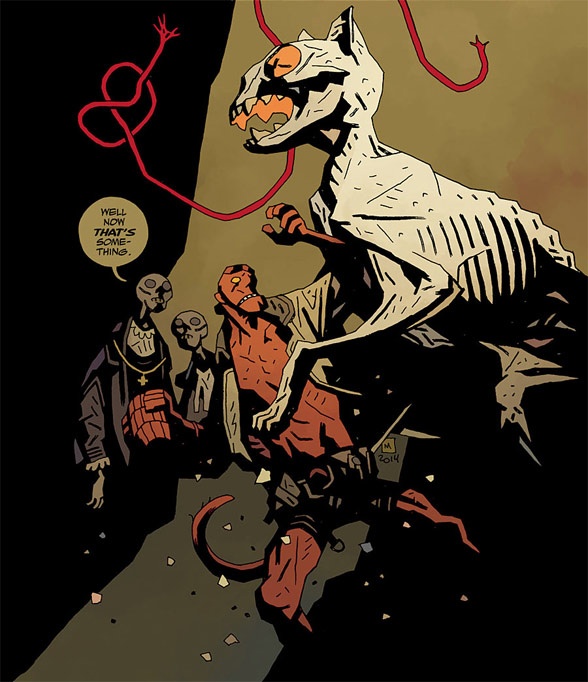 From the cover of Hellboy in Hell #8.

It hardly seems to be the same story, does it? It’s light, full of life, and unashamedly ridiculous. And this issue is simultaneously like both of those covers. It dances between these extremes of tone in a way that shouldn’t work, that shouldn’t even be possible, and it seems to do so effortlessly. That is truly something miraculous. While the beautiful sequence I was speaking of earlier left me breathless, a few pages later I was laughing out loud. There’s a panel in there that for days afterward, I couldn’t help but grin every time I thought back to it. I’m grinning right now as I’m typing.

In fact, it’s amazing how many Mignola-isms found their way into a mere twenty-two pages. It makes sense, though. After all, when Mignola sent Hellboy to Hell it was so he could draw whatever he wanted, free from the limitations of the real world. But to see those elements distilled like this is… Well, let’s just say I want to emphatically swear to fully express how fantastic it is. It is emphatic-swearing fantastic.

The thing is, I’m a very lucky reader. It just so happens that what Mike Mignola likes to draw, I like to read in my comics. There’s a mummified cat, ghosts by a lake in Hell, twisted Victorian buildings, creepy medical mannequins, birds that are most likely human souls, panels of solid black for visual punctuation, a creepy mirror, slumped shoulders, talking skeletons, serpents, bats, frogs, lilies, smoke, fire, lightning, red, glorious red. My god, there’s even puppets. I could list more, (seriously, I really could) but I think you get the idea.

This issue is up there with the very best Hellboy tales, but even still, I struggle to think of a single one with the range of tone found in this issue.

And there are some truly splendid lines of dialogue in there too. The back and forth between fellows that are much too proper and petty for their own good is sheer joy. Mignola has a way of taking these incredibly serious moments and then making them completely silly, then he flips them around and they’re dark and ominous, and the next thing you know someone’s saying something that sounds like it should only be said aloud by Graham Chapman. Mignola has tremendous comic rhythm.

I’ve been speaking a lot about Mignola, but I really should mention Dave Stewart too. In all his work with Mignola, his colors are in perfect synchronization with Mignola’s art. This issue is no different. As always, he finds the perfect color accents to lead the eye. He’s been doing Mignola’s colors since Hellboy: A Christmas Underground in 1997, and over the years he’s developed a color language for Hellboy and its associated titles.

One thing you should be really familiar with after eighteen years of Stewart’s colors… Hellboy is red. But not in this issue. It’s such an alien thing to see Hellboy’s skin drained of color and his eyes faded. It makes for a stark and powerful cover, but with page after page of interiors you feel it in your chest in a way that’s deeply unsettling. It’s an extreme I very much appreciated, and it made me feel the story in a very tangible way. It’s one thing to say Hellboy is sick; it’s quite another to make the reader feel it and dread it long before those words are ever spoken.

OK, final order cut off for this book is Monday. Do I even need to tell you to buy this? I mean, it’s a no-brainer. This is Hellboy in Hell we’re talking about, and a singularly spectacular and beautiful issue of Hellboy in Hell at that. What more could you possibly need to know?