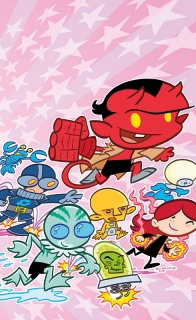 A ghost named Rasputin has been spotted! And Hellboy and the B.P.R.D. are going to find out what he’s up to.

Who is Hellboy anyway? Why does he have such a big hand and what is it used for? Who’s weirder, him or his friends? What is the B.P.R.D.? And what does chicken soup have to do with all of it? This and more answered in the debut issue, where BIG things happen to itty bitty Hellboy!

At first, this sounds like a crazy idea for a book. Sure, Art and Franco have done great work making kid-friendly comics out of characters that can tend to be more adult, but writing a kid-friendly Superman or Teen Titans story is one thing; making the likes of Hellboy, Rasputin, Abe Sapien and the rest of the gang into a kid friendly place is another. And yet, here we are, looking at this book and kicking ourselves for ever doubting.

In a world not too dissimilar to where “Tiny Titans” and “Superman Family Adventures” took place, Hellboy and his B.P.R.D. pals are seemingly in a sort of friendly rivalry with some of their rivals from the comics: von Klempt, Kroenen and Rapsutin, to be specific. However, the rivalry isn’t about the end of the world, destiny, or any other big themes from the comics. Instead, it is over who has the bigger fort or why the B.P.R.D. has a pool and the bad guys don’t.

And yet, despite the ton of the book being significantly different than the usual Mignola books, the characterizations are pretty spot on, if adapted for younger readers. Hellboy is still a brave, wise-cracking brute, Roger is still simple and kind, Rasputin is still…well, Rasputin. I don’t know if this comic will act as a gateway for younger fans to get into the Mignolaverse, as there is a significant gap, both of understanding and of propriety, between a 7 year old reading “Itty Bitty Hellboy” and reading “B.P.R.D.,” but I think it potentially could.

Sure, it may take a few years, but a kid who, today, reads “Itty Bitty Hellboy,” in a decade, might pick up a trade, or stream Hellboy on Netflix, and then get into the characters, all because he or she once read the Art/Franco-ized tales.

And for us grownups (or man-children, as the case may be), this book is incredibly fun. There are jokes that a non-Mignola fan would easily overlook, but the story doesn’t feel too inside joke-y, either. This is a comic by Hellboy fans, for Hellboy fans and their kids. And the world is a better place for it.

Final Verdict: 8.5 – The perfect gift for the child who wants more demons in their life