“Jenny Finn” #2 explores the horrific origins of the curse that has befallen London. And believe me it is horrific, though perhaps not in the way the authors intended. 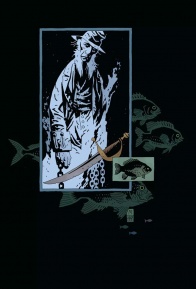 London’s murderer has been executed… but they caught the wrong man. Desperate for answers, a group of Londoners holds a séance to contact the supposed killer, but his story of a young girl born of the sea who has arrived in London with a terrible curse only brings them more questions.

I’m afraid I’m doing this review solo, which is a shame in this case, because I’m still processing this issue, and I think Mike Romeo might’ve had more to offer than I do in this case. Sorry in advance.

In “Jenny Finn” #1, the London hordes murdered a whaler called Hornbee, whom they believed was a notorious ‘whore slasher’ thanks to some misinformation from the main character, Joe. #2 picks up right where the last left off, with the London hordes celebrating the demise of Hornbee. As with the first issue, I continue to find the London horde the most interesting ‘character’ in this story. They certainly get many of the best lines.

As for Joe, he gets swept away by Pippa Platt the flower girl to a bunch of spiritualists so that they can question Hornbee’s ghost. Sounds like fun, right? And it was to a point, but then “Jenny Finn” runs into some tone problems.

Up until now we’ve seen some horrific things and bloody violence, all framed in a comical manner. There were the men exploding into fishy-bits at the whore house and then the slasher murders, both of which could have been straight horror, but the reactions around them framed them differently. When Mr. Flangelgear explodes into fishy bits, the reaction is not horror, but rather, ‘Bloody ’ell! It’s ’appened again!’ followed by the Prime Minister barging in wearing a bizarre mechanical helmet. With the slasher, the London hordes react with anger at what has been done, but more than that they just seem to love the drama of it all. They just want a good show. The butt of the joke isn’t the horribly murdered women, it’s the lack of empathy and fickle nature of the London horde.

Later in the first issue, Joe finds Olive, one of the slashers victims. This moment was played straight, to show the depth of Joe’s mistake and impress upon the reader the horror of the real slasher. It’s disturbing to have gendered violence against women used as a tool to define two male characters, but “Jenny Finn” is a Jack the Ripper kind of story, so there’s a certain amount of that I accept as a part of the premise.

Hornbee’s story in issue two, though, did not sit well with me. I can’t really discuss this properly without spoilers, so consider this your warning. While at sea, he and his fellow whalers found a horrible fishy blob, which they decide to cut up and sell to scientists. However, while cutting up the creature, they find a girl inside. Now the crew, who have been at sea for four lonely years, decide they’re going to rape this underage girl. Hornbee, however, speaks out against this and so they lock him in the brig.

Given that this book has been mostly humorous, even in its darker moments, this was a severe turn, and it seems that it’s only purpose is to impress upon the reader how terrible this doom is that’s taking over London. But I think there are better ways to do this without introducing child rape purely as a plot device. I mean, given the tone of the book, do you really think it’s going to explore this subject matter in any meaningful way? It is solely there to show the depravity of the whalers and the magnitude of the curse they unleash.

More disturbing is Hornbee, who was portrayed up to this point as an innocent trying to stop some terrible evil, but here we see him screaming, ‘Ah, you dirty bastards! Don’t you see? This here’s the ill spawn of Jonah!’ I lost all sympathy for the character then. If a bunch of men are about to rape a little girl and you think the most monstrous thing in that situation is the little girl, then you are seriously fucked up. The whalers were the monsters in this scene, and they made Jenny Finn into the cursed force unleashed on London. These aren’t just ‘dirty bastards,’ they are evil, twisted monsters and every single one of them deserved far worse than the fate that was ultimately inflicted on them.

And frankly, what was done to Hornbee doesn’t seem like an injustice anymore.

Maybe that’s the point though—I don’t know yet as there are still another two issues to go, so I’m only looking at half the picture—but I don’t like the way gendered violence against women is being used in such a cavalier manner for horror and comedy, and exclusively to explore male characters. It’s not that I don’t think you can’t do this stuff with comedy and horror, but if you do, you’ve gotta be surgical in your precision, know your target. Whereas here, I feel like these elements are in play simply because you can’t make an omelette without breaking eggs, and you can’t do a Jack the Ripper story without killing whores—and that’s a troubling thought. Themes like this should be more than just set dressing for another story. The use of this material strikes me as unaware and irresponsible.

From the Hornbee flashback onwards, the spell had been broken. I can admire the craft in the artwork, but I was very cold on the story.

Final verdict: 5 – Some very disturbing tone problems emerged that pretty much killed my enjoyment of this one.