“Jenny Finn” returns to doing what it does best in this issue. 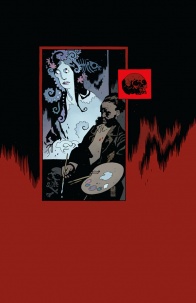 The death toll continues to rise as the tentacle plague sweeps through London, and slop yard worker Joe tries to flee the city after being haunted by visions of cursed young Jenny Finn, but everyone from a local painter to the Prime Minister is searching for him to try to get to Jenny.

Anyone that read my previous review knows I was quite cold on the last issue. I won’t be going on further about the points I raised there in this review. Be warned, there are spoilers ahead.

Issue #3 has much more of the elements that make “Jenny Finn” fun, most notably the Prime Minister. Introduced briefly in the first issue, the Prime Minister is a delightfully mad creation. There’s nothing quite like a man in a bizarre metal helmet, somehow smoking a cigarette, delivering lines like, ‘Lunatic, explain yourself’ without a hint of irony. For the most part, the characters in “Jenny Finn” blissfully lack any self-awareness, and I find this element gives many of the scenes their energy. It was one of the reasons I responded so much to the mob in the first issue.

And I think this is part of the reason Joe seems so out of place in this story. It’s not just that he’s the straight character, it’s also that he’s the most self aware. He knows he’s just a naïve country boy. There’s not much contrast between his self image and who he actually is, and it’s why I feel like the story loses momentum whenever he’s the only character in a scene. He’s predictable to a fault. He needs a lunatic to play off of to be interesting.

This wasn’t always the case, mind you. Back in issue #1, before he got ‘innocent’ Hornbee killed, Joe was almost completely defined by his bluster and self-assurance. The idea that he didn’t know what he was talking about and may not be the most well-informed man in the room had never even crossed his mind. He’s not the worldly gent he thought he was.

Once the self-doubt creeps in, though, it completely transforms his self-image. He’s worked killing cows for a while, but only after Hornbee’s death does he feel like he’s got blood on his hands.

Still, there is some irony to the character. After all, in order to get out of London and away from the Jenny Finn mess, Joe goes to the one man in London that will get him more embroiled in this horror than ever.

Joe works as a device to propel the plot forward, but the interest lies in those around him. The Prime Minister is fascinating in every scene he’s in. It’s brilliant to see him so assured that he is that of the most sensible and proper person in any room, even though that’s clearly not the case. I like it when the characters seem completely unaware of the madness of things, like back in issue #1, the way people are turning into fish bits and the general attitude is, ‘Oh, not this again.’

This is the reason I think Mr. Shlackhorn works so well. Essentially he’s a Jack the Ripper sort of character, and when we finally meet him here he does villain’s monologue™ as villains often do. He’s a somber and threatening figure, and yet while he’s going on his long rant about Oannes and grand secrets, we are audience to this image of Lord Jones wearing a tentacle on his head like a dunce cap. 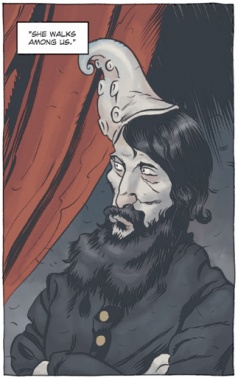 It’s in these contrasts that “Jenny Finn” is at its best, and for the most part that’s what this issue is, lots of self-important lunacy played completely straight.

I must admit, this is a strange read now in the light of plot points that’ve shown up in the “Abe Sapien” series. “Jenny Finn” is not connected to the Hellboy Universe, but all this Oannes stuff shows up a few times, most notably in “Abe Sapien: The Drowning,” “B.P.R.D.: Garden of Souls,” and several times throughout the “Abe Sapien: Dark and Terrible” cycle. In this regard, it’s rather interesting to see this spark of an idea go two very different directions. “Jenny Finn” and “Abe Sapien” are so tonally different—and yet there’s so much overlap. If you’ve read both, then you can see how the tone is really “Jenny Finn’s” most defining element. Without the self-important lunacy, it simply wouldn’t be “Jenny Finn.”

And this is where Troy Nixey’s art is shown at its best. He revels in this stuff. The London he’s created doesn’t work if he doesn’t commit to the madness. In this issue, we’re introduced to Mister Pinwheel, a man that doesn’t want to walk on a damp floor, and his solution is an elaborate contraption of ropes. Nixey draws the hell out of this stuff, and it’s what makes lines like ‘Mister Pinwheel? It has been reported to me that you have been doing some very odd things,’ work.

Going into the final issue, I hope to see more of this madness.

Final verdict: 7.0 – There’s a definite lull in the middle, but “Jenny Finn” #3 starts and finishes strong.