Joe Golem makes the leap from novel to comic in The Rat Catcher. 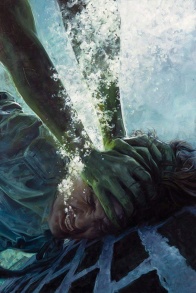 Joe Golem finds the Rat Catcher red-handed—pulling children into the canals of Lower Manhattan—and discovers that there’s more behind this creature than he suspected.

I missed the review of the first issue of Joe Golem, Occult Detective, so this will kind of cover the latest issue and the previous one. There’s a few scattered spoilers in here. You have been warned.

Joe Golem made his first appearance in a short story, Joe Golem and the Copper Girl, followed by an illustrated novel, Joe Golem and the Drowning City. Don’t worry if you haven’t read them though. The Rat Catcher takes place a decade earlier, and was written with new readers in mind as it introduces the world and characters. It’s been such a long time since I read the novel, I needed the refresher too. I was more than a little hazy on the details.

If you are up to speed, the re-introduction won’t get in the way though. It’s all character-focused, and since the characters are ten years younger than in the novel, there’s a bit a reorientation that needs to happen. Also, aside from Joe and Mr Church, the comic’s entire cast is made up of new characters: Lori Noonan of the Hudson Street Home for Children, and Eddie, Patrick, and Hector.

Oh, and of course, the Rat Catcher. The eponymous monster hardly made an appearance in the first issue, but here we get a closer look at it. And we learn a little more about it too from Mr Church: it is not a supernatural being, but something else, perhaps a cryptid.

The children in this story fill familiar roles, hitting all the beats you’d expect. I did like that Lori pointed out that Joe had been reckless with the kids though. Honestly, it was a bit of a dick mood, and if someone in the story hadn’t called him on it, it would’ve felt more than a little strange. Still, I think she lets him off the hook a little easy. I guess he had taken quite a beating to rescue Patrick. Anyway, I’m not sure what to make of Lori just yet.

The other side of this story is the flashbacks to Joe’s previous life as a golem. This stuff is particularly interesting, because the golem is so soulless, driven entirely by its purpose with no hint yet of the man it will become. The golem is less of a character and more a force of nature. I think the empty, driven aspect of the character is probably the most terrifying to Joe.

My favorite moments in this latest issue was the was when Joe’s dreams of his past life bleed into his current life, when he resists the similarities between himself and the golem. Joe makes it very clear he’s not a dog on the hunt, he’s a detective, and he makes sure Mr Church knows it. I also find it interesting to see how he’s grown and changed since the fifteenth century, and how Mr Church is manipulating him, perhaps for his own good, but I think that’s a topic for debate. Maybe Mr Church is only protecting him, but I feel like he’s also stunting him, even regressing him.

I wonder how this particular drama will play out, especially considering it needs to remain in a kind of limbo for another decade before the events of the novel come into play.

Patric Reynolds’s art has captured the feeling of the book rather well. The gray New York reminds me somewhat of the gray Kansas in L. Frank Baum’s The Wonderful Wizard of Oz. I wish it weren’t so empty though. Especially in the first issue, it seems like the main characters are the only ones in the city.

Where Patric’s work really comes to life is in sequences with a particular mood being pushed. The opening of the first issue—with Mr Church returning to his apartment after the funeral of Mr Morris, and the awakening of the golem—was fantastic, as were the underwater scenes in this issue. I liked seeing 1920s vehicles sitting in the drowned streets.

I haven’t really clicked with any of the characters just yet. I’m afraid I miss Molly McHugh. She was my favorite character from the novel, and though Joe Golem’s name is in the title, she was the real main character. Joe himself is a bit too straightforward for me. I mean, he’s dealing with a complicated past, but he’s not a complicated character, at least not yet. I’ll have to wait and see how he develops. Actually, if there’s anyone I’ve latched onto so far, it’s Mr Church, but he’s sadly constrained to his apartment.

Before I wrap up, I must say, I love David Palumbo’s covers. He absolutely nails the right tone for the series.

Overall, Joe Golem is good. I certainly can’t fault it, but it hasn’t really grabbed me yet either. The character types are familiar and they act exactly the way I expect them to act. I feel like there needs to be some unpredictability in the mix. At the moment, the Rat Catcher itself is where I’m engaging the most. After all, who’d have expected Joe would find the kids alive? I was expecting him to find gnawed and rotting corpses.