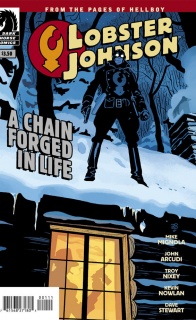 Santa was taken hostage after witnessing a hostile robbery and a man’s death. Hidden away in a mountain cabin, will the Lobster be able to find Santa and save Christmas?

Lobster Johnson is one of the oddities in the Mignolaverse – his importance is huge, conceptually, but his stories are, more often than not, more or less disconnected from the main events. Only true heroes like Mark Tweedale are able to see the connective tissue that often time eludes us, less knowledgeable common readers. But that doesn’t make the stories any less fun, or any less interesting.

But it does paint them in a light that is unlike any other Mignolaverse stories – well, any outside of “Baltimore,” which is Mignolaverse in name only. One of the truly interconnected universes in all of comics, nary an issue goes by without a serious link to something else that is happening elsewhere, or it is foreshadowing something to come, or referencing a past action. With a story like this, we are asked to read the book in a way that we are unaccustomed to reading Mignola’s work – as a true one-shot.

What is unusual about this issue is the timing of its release – this is a Christmas story, and not just one set at Christmas – it has elements of classic Christmas literature dripping off of it, it speaks of the magic of the holiday season, and it prominently features a man in a Santa Claus costume. Because this isn’t tied into a huge swath of continuity, I’m not too certain why this wasn’t held off a few months, and allowed it a bump in sales for those looking for a stocking stuffer for the comics lover in their life.

Alas, the issue is a relatively standard LoJo tale – the Lobster is trying to protect Manhattan from criminals of all kind – and this adventure finds him trying to stop a heist of a department store on Christmas Eve. Our unreliable narrator is the stinking drunk Santa Claus who gets wrapped up in the scheme due to his bad luck and proximity to the crime scene. He has been collecting toys for the needy, and was just wrapping up his shift when all hell broke loose.

These LoJo stories live and die by the artists who are illustrating them, and this issue brings both the return of Kevin Nowlan (for two bookending pages) and the debut of Troy Nixey (who, due to my years of baseball fandom, I have to actively try to not call ‘Trot Nixon’ at every turn). Nixey, an artist I had only a faint knowledge of, is a great fit for this story. Aided by the drunkenness of the narrator, Nixey’s artwork ebbs and flows like the stumble of a soused patron leaving a bar; his style allows the book to feel as drunk as the narrator. Faces are extended and cartoonish at times, and then snap into fearful realism, and float between both extremes constantly. The only figure in the book to cut a consistent profile is the Lobster himself, another nice touch from Nixey.

Nowlan’s work, as always, is impeccable, and adds a nice, sober touch to the book. His work is the only portion of the book that can be really trusted, as it is told from the perspective of the police officers on duty that night. This is a neat trick, and it shows yet another way the the Mignola crew can find work for its bevy of incredible artists.

There are lots of very nice moments in the script – not to mention a shout out to the town I grew up next to, what’s up Tenafly, NJ! – and the story really does feel like a classic bit of Christmas literature. But there is something about the issue that leaves me, pardon the pun, cold. Due to the erratic nature of the storyteller, the issue seems to lack enough heart to make it really feel sentimental, nor is it detached enough to not want the sentimentality. The most moving scene in the issue is when ‘Santa’ sees that the crooks are going to be burning the gifts, and the horror that he feels because of that – especially when the hand carved train is tossed into the fire.

That one moment brings the whole issue into perspective, and is absolutely touching and beautiful. It is too bad that the rest of the issue doesn’t offer much more of that emotion, until the gut punch that is the last few panels.

I would also be remiss if I didn’t mention that, despite all the fine work done before and after him, Tonci Zonjic has really solidified himself as the LoJo artist, and whenever a mini or a one-shot comes out without him on it, it somehow feels incomplete. I know that is not fair to Nixey, and I’m glad to see him joining the Mignolaverse, but I can’t help it – Zonjic just gets this character in a way that no one else does.

Final Verdict: 7.1 – There’s nothing wrong with this comic at all; but knowing what the best Lobster stories can do, it leaves me a little cold.