After what feels like a long time, Lobster Johnson is back, and he’s brought a fleshed out supporting cast with him! 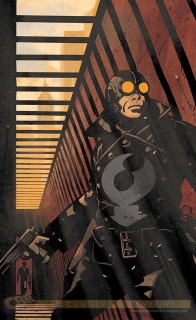 A series of brutal Chinatown murders sets off a manhunt for an Imperial Japanese agent even the Tong are afraid to kill. The Crimson Lotus, first introduced in B.P.R.D.: The Dead in 2005, finally stands revealed!

Brian: He’s back, and he’s brought talking monkeys with him! With Sebastian Fiumara on pencils, Mignola and Arcudi bring back everyone’s favorite pulp hero, Lobster Johnson, for a two-issue mini. This issue does a few things really well and, overall, was a real joy to read. What say you, David?

David: THE MONKEYS ARE SO AWESOME!!!!

But seriously, this was a great issue. Even better, it was one of the more LoJo centric issues of anything LoJo related in a while, but it still kicked ass. There’s a lot going on here, but I enjoyed the hell out of it. Plus, our boy Mark Tweedale has a letter in the back (well, I assume it’s that Mark). What’s not to love here, Brian? This is some Grade A LoJo action if I’ve ever seen it.

Brian: That is a great point about this being more focused on LoJo than a lot of the stuff we’ve been seeing lately. Not only that, but this issue really uses his supporting cast, which has been built up over the past year or so, really well. This feels the most like an installment of what a LoJo ongoing would feel like, as opposed to the minis where, frequently, he is in the background.

And yes, those monkeys are fantastic.

David: I have to ask…do you remember the monkeys?

Brian: I assume you mean the giant monkeys from “The Iron Prometheus?”

David: No, they belonged to Daimio’s grandmother – The Crimson Lotus. Here’s a snippet from Daimio’s Wiki page:

“After the events of The Dead, Daimio has begun undergoing medical treatments with an apparition he calls ‘Chinaman’. These mysterious treatments seem linked to a bizarre, monkey-like specimen in a jar Daimio recovered that had once belonged to his grandmother, an Imperial Japanese agent known as The Crimson Lotus. The embalmed creature appears identical to one Daimio saw in his visions just before his death in the jungle.”

So they appeared previously, which likely makes the figure in the fire at the end The Crimson Lotus. It all comes back together Brian!

[Note: We clearly didn’t read the solicit for this issue, which is listed above. We’re busy folks, give us a break! – Brian]

Brian: We should stop being surprised that all of these books being interconnected cleverly at this point. There is a reason that these are among the best comics being published, and the behind the scenes work that guys like Scott Allie and Daniel Chabon do really plays out on the pages.

But I have to say, I really enjoyed the propulsive pace mixed with the typically leisurely pulp vibe. This issue was one of the more exciting LoJo issues in recent memory, and I loved the way that Arcudi and Fiumara worked together to control the pace and atmosphere of the story. Speaking of which, you’re a big Tonci Zonjic fan. What did you think of Sebastian’s work here?

Brian: I am a huge Zonjic fan, but Fiumara is the right guy for this story right now. Zonjic’s work is best for the scenes of LoJo hovering in shadow, and this book is all forward momentum. I think the pacing of the book might actually be the best part – not that I don’t love languishing in the rich colors and deep shadows that Zonjic and Dave Stewart usually fill these books with, but it is nice to see a more, for lack of better term, swashbuckling LoJo.

David: Yeah, I really enjoy him running along the rooftops and getting in the mix. It was a nice side of him to see, and it added a lot to the pulp hero vibe without taking anything away from what has been previously established about him.

I do have to say though, there are some backgrounds with completely blank faces that I scrunch up my face to. Sometimes Sebastian would kind of scratch them out as we know they’re in the background, and it would add a layer of depth without bringing us into details, but there is one panel where – clear as day – there are a bevy of blank faces. That always kills me a bit when I see it.

Brian: I concur – no need for a bevy of The Question lookalikes. I get why he does it, but I’m not a huge fan.

If that is our biggest art issue, I think we’re doing alright.

David: Oh for sure, but background depth always kills me. It’s a pet peeve for me.

Anything else to add before grades, Brian?

Brian: Not particularly. This was a great issue that really perked up my day. I give it an 8. You?

David: I’d agree with that. This was a propulsive, powerful issue that underlines everything we like about Lobster Johnson. It was a damn fine read.

Final Verdict: 8.0 – Buy it for the monkeys, stay for everything else

Welcome to Mignolaversity Debrief, our column where we explore the latest stories from Mike Mignola. This time we’re discussing “Witchfinder: The Reign of Darkness” #3 with writer Chris Roberson and artist Christopher Mitten. If you missed our previous debriefs, here are links to #1 and #2.I love this cover. Given that all five covers for […]