“Metal Monsters of Midtown” is tremendous fun and so beautifully drawn, you’ll linger on every panel. 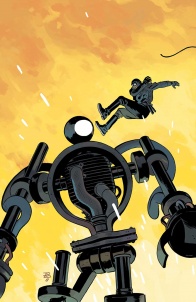 The giant robot invasion of New York comes to a showdown when the Lobster has to get into a machine’s head to drive it out of the city.

Mike Romeo: Oh my gracious, this comic! I cannot get over how good it looks! I know we’ve been gushing about the art in it since issue one, but I really think that this issue is a high point for Tonci Zonjic. There was at least one panel on every page that I wanted to call out in this review, some for their subtlety, others for their bombast. Zonjic is a masterful cartoonist, and utilizes shorthand everywhere he can to communicate what’s happening on the page. For those at home, when I say ‘shorthand,’ I mean that he uses as few lines as possible to get the reader to see what they’re supposed to. A little line under an eye to make someone look sleep deprived, a squiggle to show a bend in fabric, that stuff. It’s the sort of thing that made me fall in love with Mike Mignola’s work, you know? It creates a style that I really respond to.

Of course, Dave Stewart is there to bring it all home. I love the way the two artists lean on one another, knowing where to back off to let the other make the point. The result is a comic made of panels that each look like fully formed pieces of art in and of themselves. I really hemmed and hawed, but I think that this panel is a perfect encapsulation of what these two can do together. 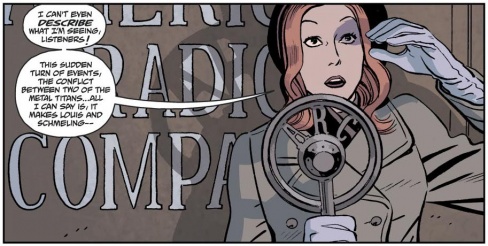 On a technical level, there’s so much to admire here. The way Zonjic succinctly describes the drape of the fabric and his affinity towards hand lettering is on full display. And then there’s the way Stewart lights the panel, creating an interesting shadow across the backdrop. It’s as close to perfect comic art as we can get, I think.

And sure, there are more thrilling panels in this book. But just in terms of execution, it’s remarkable.

Mark Tweedale: I know what you mean. I follow Tonci Zonjic on Twitter just so I can catch snippets of his work in progress. I loving seeing the process of distillation that occurs, like this panel in which many of the whites were blacked out.

And, as you said, the way Stewart and Zonjic lean on each other makes for some fantastic work. Zonjic colored himself on the “Jake Ellis” books, and so he knows color’s power to augment and support his work, and he clearly trusts Stewart. This shows especially with the robots, where the way the lighting traces the shapes from below creates a sense of scale. Zonjic leaves these big black spaces in his work, trusting Stewart to fill them in. And Stewart knows how to color in a way that compliments the art, taking the same “less is more” approach, suggesting shapes and textures without cluttering the space with excessive detail. 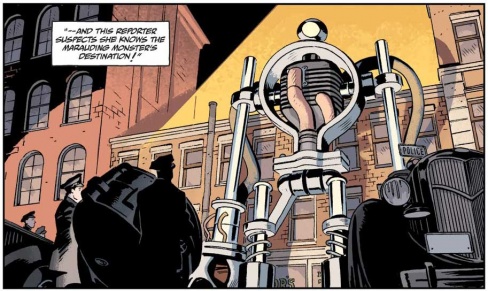 I mean, look at the roof near the text box in the top left. So few lines, and yet the shape of the roof’s cornice is exactly as defined as they need to be. The linework and color are both succinct in a way that is deeply satisfying and pleasing to look at. But this means they both have to be very clear about what they’re saying in every panel, so the layouts in this issue sing. There’s a moment when one of the giant robots attacks, and there’s this wall of black with an archway of light to break it up. The robot is framed perfectly in that archway when it appears for maximum contrast, making the impact of the robot’s arrival that much bigger. It’s the sort of moment that looks so effortless in its final execution, but when I think about it, I think there must have been a lot of playing with the scene for it to come together. I mean, the whole location is built around the archway specifically for that moment, so the location would have been designed after this layout for this panel had been put together.

This is another element I love about Zonjic’s work — the sense of play. He seems to enjoy finessing every scene and every panel.

Mike: The more I think about it, the more I start to feel like the Zonjic/Stewart relationship is a lot like how I perceive the classic penciler/inker teams. The way one picks up where the other left off, and how they’re able to instinctively know how the other would view the page. Teams like Kirby and Royer or Miller and Janson had a kind of synchronicity that seemed absent when they’d work without one another. That’s not to say that anything they did with other collaborators was bad, because that’d be nonsense. It’s more like there was a real magic in the pairings, and that’s a rare thing. This stuff is my favorite part of comics: collaborations whose sum is greater than its parts.

Through all of the oohing and ahhing I did over the art as I read this, I almost missed some genuinely funny dialogue from Arcudi. Specifically, this exchange: 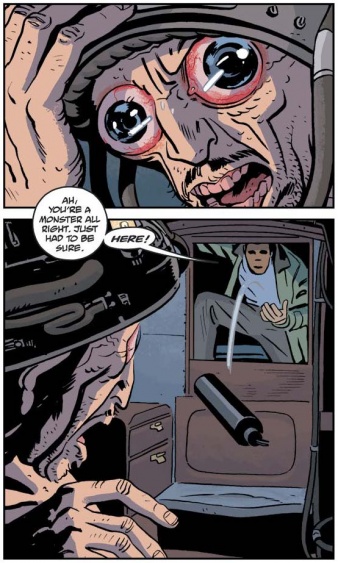 It’s stuff like this that shows just how well suited Arcudi is for this type of story. It feels like one of those pauses in action that are used for a moment of levity in the narrative. It’s not quite fourth wall-breaking, but it nearly plays that way. Almost like the action pauses so that it can be commented on, in a ‘we good?’ sort of way. Does that make any sense at all?

Mark: It does. I think a moment work because it doesn’t sacrifice character in the process; it reinforces character instead. The scene is not just commenting on the action, it’s commenting on Harry too. That’s the element that grounds it.

Arcudi’s excellent with his dialogue. I’ve seen it said again and again that his dialogue feels real, but honestly, I think that sells him short. Like Zonjic’s artwork, which you described as a sort of shorthand, Arcudi’s writing is remarkably succinct. His dialogue isn’t like real dialogue at all — real dialogue meanders and is full of redundancy. What Arcudi does is write dialogue that’s true to character, and the dialogue feels real because we’re invested in that character’s reality. That’s how he can get away with a ‘not quite fourth wall-breaking’ moment.

And, let’s face it, the Lobster can say some pretty outrageous things at times. Arcudi manages to strike a balance where he doesn’t feel like he’s holding back on that at all, and yet doesn’t tip the story into the realm of too ridiculous to empathize with either.

Last week I was reviewing “B.P.R.D. Hell on Earth: Cometh the Hour”, which is such a different animal from this story, and I think the comparison between the two demonstrates his impressive range and mastery of tone. Both feature giants on a rampage, and yet they’re on opposite ends of the spectrum. One story is heavy with doom and gloom, and in the other there’s a sense of fun — a police officer can exclaim ‘Timber!’ as a robot falls down and it works and makes sense in that moment. Despite its lighter tone, “‘Metal Monsters of Midtown” still has a sense of peril though. I found the contamination the Lobster exposed his spirit to was a powerful expression of this, building on what we’d seen happen to Aliyev and his partners. It’s elements such as these that ground the story and make it plausible that “Metal Monsters of Midtown” and “Cometh the Hour” exist in the same universe.

Mike: Not only is it plausible, but it gives the world a history that feels deeper and richer.

Mark: That’s true. It was a very pleasant surprise. I always enjoy “Lobster Johnson”, but I never really expect it to plunge into the mythology as much as this one did.

Mike: So are we going to make it through this review without having to issue a spoiler warning?

Mark: I think so. Let’s give it a score.

Mike: I loved this issue, as well as the series overall. This was a real high point for both Zonjic, Stewart and Arcudi’s work on The Lobster. It earns an 8.5 from me.

It’s funny. Normally as a Tonci Zonjic arc wraps up I get a little sad, because I don’t know when I’ll see one again, but just a few days before I read this issue, I saw him post a work-in-progress panel for the next “Lobster Johnson”, so I sailed through this with a grin on my face, no sadness at all. It’s fantastic to read a book in which the creative team seems to be having so much fun.

Final verdict: 8.5. This story is one of the best “Lobster Johnson” stories yet. Arcudi, Zonjic, and Stewart shine in an issue that’s a pure joy to read. 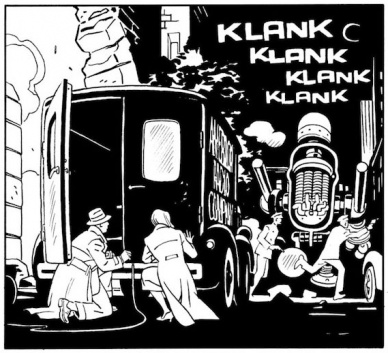 And check out Tonci Zonjic’s Tumblr. His process pictures are excellent.

Mark: Tonci Zonjic got in touch with me about the way he, John Arcudi, and Dave Stewart work on the series. He included an example of what he sends to Dave Stewart to color: 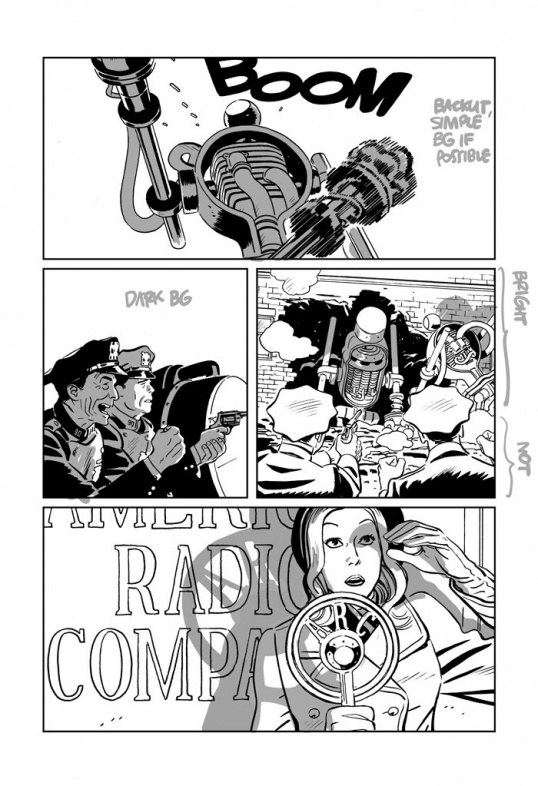 Furthermore, he pointed out that the framing of the robot in the arch that I mentioned was written in the script by Arcudi. This demonstrates how seamlessly the team on this book works together. From a reader’s perspective, it’s impossible to truly tell who is responsible for specific story choices, and it shows the degree of communication between Zonjic, Arcudi, and Stewart. With this in mind, it’s little wonder that this miniseries was such a smooth reading experience.