A short mini wraps up in spectacular fashion, and everyone is left wanting more! 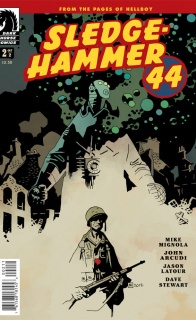 Outgunned and outnumbered by an army of Nazis, a group of GIs must band together and unleash the Hyperborean power of the mysterious man in the iron suit in order to make it home safely.

Brian: The two issue miniseries is an odd beast; often times it can feel like an over-long one-shot, or a rushed three issue mini. However, I was more than satisfied with “Sledgehammer ’44” – in fact, amid all the fantastic Mignolaversity content lately, this is tied with “A Cold Day in Hell” part 1 for my favorite single issue from the Mignolaverse in 2013 so far. What about you, David?

David: Well, this was very good, but ultimately I’d put it a good distance behind B.P.R.D. #105 and Vampire #1, I’d have to say. It’s a really good book. I dig Sledgehammer, and I like how they start developing Vril here and the ties to various parts of B.P.R.D./Hellboy lore while also establishing the way the suit will be driven going forward (or perhaps just for a time). It’s a really damn good issue, but you could definitely argue it’s fairly slight overall. I dig it, for sure, but it’s very slight.

Brian: I may start calling you Sonic (due to you hedging like a hog, obviously).

While I can’t argue that this is a more “slight” story than the others we mentioned, I also have to advocate for it a bit. This is probably the most new-reader friendly Mignola story in quite some time, and it had such a wonderful combination of retro war comic feel, along with all of the characterization and big ideas that make Mignola books different than any others.

I want to start our discussion at a really odd place – with the colors. Dave Stewart is the colorist on this book, and while that shouldn’t surprise me, it does. For a guy who is usually quite bold with his color choices, Stewart does an amazing job coloring this book in subtle and stylish ways, and it is miles away from his usual work. The shock of red, when blood appears, is such a heartbreaking and stunning detail, done perfectly by Stewart. I know it has been said many times, but that guy is the best.

David: Before I move on to Dave, I do want to say this is certainly more new reader friendly than, say, Vampire. In fact, Brandon Burpee (my 4 Color co-host) dug the hell out of the first issue, and he doesn’t read any Mignolaverse. That said, doesn’t mean it’s better that Vampire. Just means it’s more new reader friendly. Not that we have to compare, just stating my preference and the reasons why. Sledgehammer definitely kicks ass, and this was an enjoyable issue, but it’s certainly a quicker, less robust read than we’re used to from the Mignolaverse.

And yeah, Dave Stewart rocked this issue. I like the kind of faded glow to everything going on, and I really enjoyed (at least the art) of when Redding get shot and there was the slow realization that damn, he got shot due to the blood coming out. Like you said, the shock of the color really was an impressive moment.

I did want to downgrade the art just on one bit. There was this moment where the Nazi reinforcements were coming and the one soldier pointed them out where the paneling kind of didn’t do its job. When I read it, I had a hard time differentiating the panel from the soldier’s perspective and the close up of the soldiers. I think it’s because the right edge of the panel matched the in-between panel color, and it kind of merged everything. Honestly, besides that, the art was really strong throughout. Jason Latour is a great fit for this book. With that said, I’m excited to see what Laurence Campbell can do later. What about you?

Brian: Latour did an amazing job here; and while I’m excited to see Campbell’s take on the character, I hope this doesn’t mean less Mignolaverse work for Latour. Latour and Stewart, together, gave me a comic that visually reminded me of the war comics I hated as a kid, but with the action and dialogue that I never felt those issues delivered. I have a very specific memory of getting a pack of 6 comics at K-Mart, with Spider-Man issues on the outside, and a few issues of “The ‘Nam” hidden from me, in between glorious Spideys and being so disappointed. This, like “Men of War” from DC in a way, were attempts to take that classic style and do something new with it. This succeeded; “Men of War” didn’t.

We recently had a great installment of “Hell Notes” that focused on Vril energy, which is a plot point that I would assume even the most vigilant of Mignola-heads were fuzzy on. Mark did a great job illuminating how important Vril has been thus far, and this book seems to be poised to make that even more apparent. How do you see an expanded history of Vril/Iron Prometheus/Sledgehammer fitting into the giant mosaic that is the Mignolaverse?

David: There are excellent war comics out there, and comparing to “The ‘Nam” is always rough because, frankly, that was kind of rough. I loved EVERY comic as a kid. The ‘Nam? Not so much.

Anyways, I like our boy Tweedale’s idea that Vril energy is the key to the winning the war, effectively. Well, it’s not so much a theory as an obvious truth, and I think the Sledgehammer suit will eventually play a very important role in this whole deal. I mean, not to go too completely obvious, but wouldn’t Johann fit pretty damn good in that suit when the time is right?

Brian: You beat me to the Johann punch, buddy. I think that is the eventual conclusion to Johann’s arc, since it seems that you don’t come out of that suit alive. But, to be fair, what is a more powerful suit to have?

So, we’ve heard that this story will be continuing in the future – what type of stories do you think we’ll be getting of the Vril suit? Are we going to pick up in six months? Six years? Sixty years?

David: I think we’ll probably jump around quite a bit. Maybe going war to war, maybe not, but either way there is no pressing narrative to be pushed in the 40’s still. I think we’ll work our way to the present when the suit is needed. The way I see it, this suit is kind of a wild card that could be used at any time. We don’t know when it’s going to come, but it’s going to make its presence felt, I’d say. Seems like a safe bet, yeah?

Brian: That’s my thinking too; sort of a “Zelig,” popping up in all sorts of interesting scenarios.

It’s interesting, this is yet another Mignolaverse offshoot to come sort of out of left corner, but instantly ingratiate itself and become part of the rotating cast of books. At what point do you think we’ll reach saturation point? Or is that question silly, because there’s never too much Mignolaverse?

David: I don’t think that’s a concern for this because it’s sort of like Witchfinder and Lobster Johnson, I think. They’re side stories that aren’t precisely tied to the main story…until they are. Witchfinder is now. LoJo and Sledge aren’t yet, but I’d put money on them eventually being just that.

If all of these books were coming monthly, then we might have a problem. In this case, not so much. Do you think a saturation point is possible?

Brian: I think it depends on just how frequently all these books come out. One of the joys of the Mignolaverse books is that they are dense works that demand your attention – you can’t read these like popcorn comics (or like “Age of Ultron”). So, too many of them might cause such a dense soup of information that it could get daunting – hell, even when “B.P.R.D.” was the only regular book, at times I felt lost!

But we’re nowhere near that point, as of yet, so I think we’re ok.

David: I definitely agree with that. I don’t get lost very often with B.P.R.D. – Hellboy, assuredly, but not B.P.R.D. – and I’m fine with how they’re doing this.

So what would you give this for a grade?

Brian: I think this is a case of something hitting right in that sweet spot of “comic I wanted but didn’t know I wanted.” I relished every panel of this issue. This is a 9 comic for me.

David: It’s a really, really solid book, but nothing that made me go over the moon about it. Damn good stuff, just not great for me. So I’ll give it an 8, to give us an average of 8.5.