This Thanksgiving I’m thankful for a new issue of Sledgehammer 44. 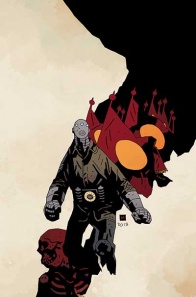 After the classified, advanced airplane known as the Flying Wing is hijacked by the Nazis, Sledgehammer is sent on a special recovery mission that pits him against the deadly Black Flame!

Back in 2005, in the pages of “B.P.R.D.: The Dead” #3, Johann found an old scrapbook with a picture of the Black Flame on the Flying Wing from September 1944. Now, eight years later, we’re finally getting the story behind that picture. 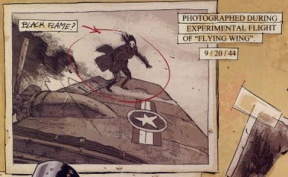 The flashback sequence to 1933 at the beginning was the perfect way to set the mood. Set a year after the events of “Lobster Johnson: The Burning Hand,” Raimund Diestel (the Black Flame of the 1930’s) is incarcerated in a maximum security prison in Germany. He doesn’t eat, he doesn’t speak. Then Hitler shows up and convinces him to join the Nazi cause. Jump forward to 1944, two months after the events of the original “Sledgehammer 44” miniseries. Redding is isolated in an R.A.F. base, he doesn’t eat, he doesn’t speak. The juxtaposition between these two sequences is handled masterfully. Redding and Raimund even have the same body language. You could even take it further as Hitler manipulates Raimund to the Nazi cause, so does Helena manipulate Redding the cause of the allied forces. Read it however you will, it was expertly handled in writing, art, and color.

There was also a sequence in there serving to recap the events of the last Sledgehammer miniseries. It’s exposition, but it doesn’t read like it. It opens up the finale of that past mini and expands upon it, giving a powerful emotional context for Redding’s state of mind. Maybe this is just my imagination, but when Redding’s spirit appears on the double-page spread in the middle of the issue, it appears Laurence Campbell has modified his style somewhat to mimic Jason Latour’s. It was a nice touch that made this story one of the smoothest transitions from one artist to another I’ve ever read, and yet both artists are so very different from each other.

This issue went from strength to strength. When the story finally came to that key scene from the photograph found by Johann, they managed to make it even more impressive than I’d previously imagined by making the Black Flame fly. Yeah, that’s right, he can fly. Oh, and the guy behind the camera? His last name was Corrigan. Whether anything will come of that, I don’t know, but it was a nice little nod.

The sequence with Helena baring her scars to Redding was a powerful moment. The torture scene in “Lobster Johnson: The Iron Prometheus” never quite sat well with me. Probably because that story was so pulpy, and it almost seemed like having a damsel in distress being tortured was thrown in there because that’s what those old pulp stories from the 30’s and 40’s do. But now I’ll read it differently. There were very real consequences, which marked Helena both physically and mentally, and yet she’s more than just a victim here. This is what I love about Sledgehammer 44. It draws from the tradition of the pulps, but it adds to it too. Helena is more than just a trope.

This comic has a palpable atmosphere, right from the first page. Laurence Campbell has a gift for bad weather. Rain, fog, lightning, in his hands I can hear them, feel them. They have a life beyond the page. Like Brian and David, I really enjoyed his debut in “Wasteland,” but here he seems more comfortable with the world. And with Dave Stewart thrown into the mix these pages sing.

In case you haven’t figured it out yet, this comic is most definitely a buy. Longterm fans of Mignola’s world will love it, and yet it’s completely accessible to new readers. So much of this comic was pure wish fulfillment for me. Now if only I had the next issue…