Tyler Crook continues to impress in the latest Witchfinder. 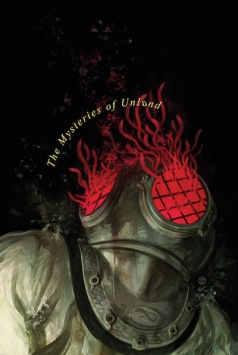 After a dangerous clash with giant eel monsters, Sir Edward Grey determines that all signs of the secrets of Hallam point to Poole’s Elixir factory.

In the previous issue Sir Edward was sent on a mission that seemed a waste of his talents, not supernatural at all. He was eager to get the whole thing over with and head back to London. Then giant eels attacked and nearly killed him in his hotel room, so Sir Edward’s interest was piqued. Thus, when this issue kicks off, Sir Edward is decidedly less surly, and has started playing the game. His reply to Constable Lawless’s enquiry was particularly amusing.

This issue is shoulder with a lot of exposition, setting up the details of the mystery, introducing various suspects and questions while the townspeople pretend to be normal. The Poole’s factory is presented as a magnificent achievement, but don’t ask too many questions because the answers are boring. There’s nothing weird going on here! We’re such a happy town!

It’s a necessary part of the story, but the beats of the sequence are very familiar. There’s a few teasing glimpses of what lurks beneath the surface, just enough to give everything an uneasy atmosphere. Here Sir Edward is playing a role while also shrewdly putting pieces together, swinging back and forth between the two. It’s a side of him we don’t often see, leading to lines like, “I never knew drainage systems were so… fascinating.”

Later, Sir Edward visited Hallam’s Eel Museum. This was a sequence that brought to attention a certain oversight in my last Witchfinder review: The work of Clem Robins. In this miniseries his work is more than giving the characters their voices and sound effects their volume. He plays a crucial part in the construction of the world itself. I’ve no idea how closely he worked with Tyler Crook, but I imagine they would have collaborated on the various pieces of signage, the Poole’s Elixir advertisements, and double page “The Suspicions of Constable George Lawless” from the last issue. These aren’t just atmosphere either. The various bits of text in Hallam are valuable pieces in the puzzle, and they anchor it in a specific time and place.

OK, I’ve been dancing around numerous spoilers, and I’m running out of wiggle room. Jump to the end for my verdict to remain spoiler free.

In the last issue I had wondered about some strange swirly panels outside of Poole’s factory. I didn’t know why they were like that, but I was curious. In this issue, they’re revealed to be point of view panels for eels. It’s a nice device to build tension, and you know it’s not going to end well for Diggory Fenn.

The villain of the piece, the mysterious “Mere” was revealed in this issue. I liked the visuals in the Unland swamp, but honestly, this is something I would have preferred not to have seen yet. I felt I was shown too much of what was really going on while Sir Edward remained unaware. It’s a minor quibble, and one that really comes down to personal preference, but in mystery stories I prefer to be teased more and to discover clues alongside the protagonist. (The Mere’s height and fingernails in particular I consider to be some rather important hints)

There was also the way the Mere killed their eel servants. It was an impressive visual, but one that lessened the impact of the final scene in the issue. If I hadn’t known what was going to happen to Diggory, that last page would have been extra shocking. It was just as gruesome, but the foreknowledge did lessen the horror aspect for me. That said, that moment was played so well, it doesn’t lessen the impact by much.

This was a quieter issue mainly concerned with set-up. The British-ness of Sir Edward’s wit is particularly enjoyable, and Tyler Crook’s work is excellent. For the most part though, the mysteries of Unland are still unfolding. We’ve been shown but a glimpse of what’s really going on, and now that the ground work has been laid, I’m eager to discover more it the next part.