This issue, dealing with the fallout of Diggory Fenn’s death, is not what I was expecting. 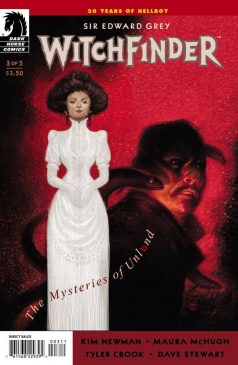 Local officials present a façade of normalcy, but the Witchfinder knows there’s something wrong with the denizens of Unland, and he’s starting to uncover what that has to do with the dying founder of the town and the elixir he invented that put the town on the map…

I’m going to dive straight into spoiler territory with this one, so consider this your warning.

Last month’s issue of Witchfinder ended with the gruesome death of Diggory Fenn. Sir Edward then stalked back into town, lightning flashing in the sky, with Fenn’s harpoon bolt in hand. It was a dramatic sequence to say the least.

Unfortunately, the palpable energy created by that scene doesn’t translate into action in the next issue. The opening sequence essentially amounts to more amusing interactions with Constable Lawless and other residents of Hallam. It’s the sort of sequence I would have enjoyed a great deal before the death of Diggory Fenn, but after it, it almost completely vents the tension. The harpoon bolt is little more than a prop for Sir Edward to gesture with, and his interactions with Constable Lawless, while heated, don’t go to the next level. It’s simply more of the “you’re incompetent and I know you’re lying” stuff, when what I wanted was “I know you’re lying, Fenn is dead, it’s time you started talking, you low-life bastard” stuff. Grey was angry, but that anger wasn’t channeled into anything, so it came off as little more than hot air.

All that said, it was a good sequence, it was just the wrong sequence for this moment.

And then Sir Edward went off to visit the Pooles, in particular, he finally got to meet Horace Poole, clearly quite frustrated, throwing out broken sentences and curses. Sir Edward rightly suspected witchcraft, but it’s frustrating how quickly he was dissuaded from his search for a witch’s knot hidden in Horace’s bedroom. Again, if this had been before Diggory Fenn’s death, I would have completely bought into it, but after… no, not at all.

That’s not to say the scene doesn’t have merit. It put many clues on the table and is absolutely essential. It’s just in the wrong place. I think the real fault here is simply Fenn died too soon. Had Sir Edward gone from his investigation at the Poole’s Elixir factory to the Eel Museum, to the Poole’s manor for dinner, and then met with Fenn and witnessed his murder, I wouldn’t have had the same problem. Of course, if that had happened, I would have expected his encounter with Constable Lawless to end with Sir Edward dragging him off to Unland, harpoon in hand, ready to go fishing…

Because I really, really, really want Sir Edward to go to Unland. In the first issue he had a message telling him to go there, and everything since has pointed in Unland’s direction. In this issue he had Hope Ableadams telling him to where to catch something big enough to warrant a harpoon, and a babbling Horace Poole telling him to go to the mere. So at the end of this issue, I was fully expecting Sir Edward to decide to go to Unland. But to instead have him hop into a carriage and tell the driver to go back to the Glass Eel Hotel was a frustrating way to end the issue.

Overall, this issue seemed to spend most of its time diffusing the tension created in the previous issue, and then tried to ramp it back up again with the cliffhanger reveal that Constable Lawless was full of eel monsters. But it didn’t have near the impact the the death of Diggory Fenn did. And having the eels in someone as incompetent as Lawless actually diminishes how threatening they are.

Sir Edward’s seen a lot of weird stuff in this story so far, yet nothing has prompted him to do anything more than ask questions, and after three issues, that’s a problem. It’s even more of a problem when the story sets up beats that tell the reader he’s going to act, and then Sir Edward goes off and… asks more questions. If the protagonist is going to ask questions for three issues, taking minimal direct action, then the writing needs to set up the reader’s expectations by framing sequences accordingly. Fenn’s death should have been downplayed, seemingly nothing supernatural about it, and Sir Edward Grey should not have picked up the harpoon bolt if the scene that followed it was going to be so restrained. The way Fenn’s death played out, it now feels like it was so dramatic only because it was the end of the issue, and the issue needed a dramatic cliffhanger, not because it was the right beat for the story.

And if Sir Edward is mainly making inquiries for three issues, I’d like to see some change in his approach. So far he asks questions point blank and then narrows his eyes as he listens to the reply he’s given. That worked fine in the first issue when Sir Edward was impatient to get back to London, but with a mystery he’s now interested in and with people dying, I want Sir Edward to at least be smarter with his line of questioning. Instead of letting Lawless know he can see right through him, toy with him, lay a nice little verbal trap for him to fall into and divulge something. As an investigator Sir Edward is far too transparent and bullheaded. He’s far too easily baited into verbal conflicts to be effective.

In this particular story though, I’d like to see more direct action taken in the remaining issues. Go to Unland, break into Poole’s manor or factory, confront the obvious liars with a focus on getting them to reveal information. In future stories I’d like to see Sir Edward develop his investigative skills so that when he questions someone, they don’t lead the conversation, he does. And he gets extra points if he can do it without the subject noticing he’s doing it. It’s an area of growth Sir Edward needs to develop in, and it would be interesting to see him recognize this shortcoming in himself and actively try to improve upon it. That way the next time he starts looking for a witch’s knot, he won’t tell anyone he’s looking for one, giving a possible suspect a chance to throw him off the scent. Instead, he can find or manufacture an excuse to look around the room, and when he’s done he can reveal what he was really looking for if it suits his purpose to do so.

All that said, this was still a good issue. I liked it, but the structure took it a step backwards from where it had been. I’m hoping it steps back up to where it had been previously for the remaining issues.

And as I’ve said before in my reviews for the first two issues, Tyler Crook is excellent on Witchfinder. It fits him like a glove, and I’m really enjoying his work. Just like I think of Tonci Zonjic as THE Lobster Johnson artist, I’m beginning to think of Tyler Crook as THE Witchfinder artist. This series isn’t over yet and I’m already hoping another Crook-drawn Witchfinder will be announced, even if it’s an eight-page short story in Dark Horse Presents.