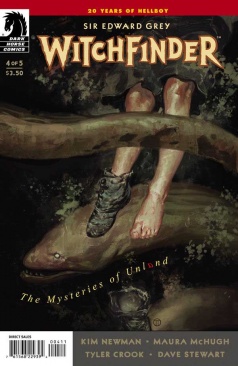 In a struggle with the local police, the witchfinder is taken down, but before they can drown him in the rising waters, a strange fish woman takes him in and reveals the mystery of Unland.

I was sucked into this one right from page one. Julián Tedesco’s cover was perfect. It’s my favorite of the five he’s done for this series, and it set the right tone for everything to follow. I made a comment in my last review about finding the cliffhanger a bit unsatisfying. If the first page of this issue had been the last page of the previous issue, I would have felt completely differently though. Sir Edward falling asleep with nursery rhymes singing in his head, being driven away by an eel-infested Constable Lawless is instantly creepy. And then it gets creepier as the story plunges into Unland.

Tyler Crook and Dave Stewart have been doing a fantastic job on this series. If you’re setting a story in a swamp thick with fog, Tyler Crook’s the guy you want doing it. The way elements emerge and disappear in the mist make for incredibly haunting imagery, so much so that I reached the end of the issue feeling rather dismayed that there’s only one issue to go. I want to spend more time in Unland if only just to look at it. (And the giant eels have never been more terrifying even if they’re only really seen in passing.)

And it’s really cool that four issues into this story the art can do something stylistically surprising. There’s a particular moment early in this issue with Constable Lawless that I particularly enjoyed, where he spoke of Grey and himself being bound for the Pit. Crook and Stewart did a fantastic panel completely different from everything else around it. It was just the punch the scene needed, especially because I was convinced the Lawless character wasn’t really capable of making me feel any real menace… and then with that panel he was menacing.

The flashback material is the best part of this issue though. While it is a rather convenient way to reveal certain plot points, it’s such a visual way to tell the story, I found I didn’t mind in the slightest. And the story of Sir Horace, Ada, and their poor son, Hallam, is connected to the very heart of the mystery in Unland, so being able to see it unfold was very welcome. This is the issue that gives the whole mystery its context, and having a visual way to broach it kept the story’s energy up.

Sir Edward’s encounter with Ada shows how much he has changed since his visit to America. Where once he would have been quite antagonistic, instead he’s much more reserved and not so eager to jump to conclusions. (Of course, he’d already met Ada in the second issue at the Eel Museum, though he didn’t who she was at the time.) Knowing what he knows about Ada, it’s likely she’s involved in what he would have once called black magic. And Sir Edward simply talks to her, gets the measure of her, and even drinks her tonic.

This particular issue is slowed by having to explain itself, especially in the last two pages. Given the kind of mystery story that it is, that’s sometimes unavoidable, so I welcomed the punctuations of humor (such as Ada’s smirk when Sir Edward hesitates to grab his clothes).

However, we’re now four issues into this story, and I find I would have much preferred to have read the whole miniseries in a single sitting. Especially when it comes to who married who, and which children they had, with a month in between issues, there’s always a delay when processing new information that lacks immediacy and lessens the impact of the reveal. The eventual trade collection will have no such problems. It will also likely be a rewarding second read through.

Overall, it was the atmosphere of this one that I enjoyed the most. I know that’s a vague sort of compliment, but the general mood of this issue clicked. This is what I think Witchfinder should feel like.