“Miles to Go” #1 takes what could have been a collection of usual crime tropes–killer with a haunted past, wayward hero with nothing to lose–and turns them into a subtle, well crafted story. “Miles to Go” #1 is a masterful first issue, and successfully marries moments of intrigue and violence with quieter, more low-key scenes. 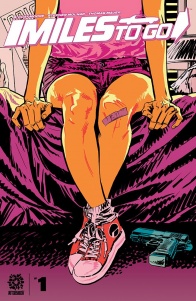 Amara Bishop is a newly single mother with a long-buried past. Raised by an alcoholic father in a rundown trailer, Amara was a child when she learned to kill. And she hasn’t killed anyone since she was thirteen. When her aging mentor is murdered, and her daughter is threatened, that will soon change…

To be sure, “Miles to Go” #1 leaves a lot of questions unanswered. There’s very little exposition in regards to Amara or her mentor’s past motives. The small clues we have are that they worked together, offed some bad dudes who maybe dealt arms, and in doing so got the attention of high up U.S. government agencies. And while we don’t get answers, we do get a feeling for the vibe of this story. Specifically, that it’s not going to a paint-the-walls-red kill fest, or something similarly high on octane but low on character. From the looks of it, “Miles to Go” #1 will be as much about Amara’s dark past as it is about her present day divorce. Amara feels like a full character that we’ve only begun to meet. She is stern but not vindictive, regretful of the past but not self-pitying or redemption seeking — at least not yet. All in all, she has a lot to think about. Moore captures this well through tight dialogue that’s never too weighty but nevertheless full enough to feel real. Amara is the heart of this story, and we suggest giving “Miles to Go” #1 a read just so you can get to know her.

The villains in “Miles to Go” #1 also have a lot going for them in terms of characterization. Agents Wade and Carver fall in the bad-guy territory of somewhat bumbling, somewhat incompetent, somewhat evil, but all around endearing. That is to say, they feel less like mustache twirlers and more like two guys on the job who have gotten a little over their heads. They’re driving the story for now, but for how long?

One more note about questions. In most first issues, there’s a lot the audience doesn’t know, in terms of motive, character, even setting. This makes sense. We read stories to find out what happens next, for the chance to grab the tasty carrot the author is dangling in front of our faces. But when writers go overboard in complexity, we get tired. When the characters are uninteresting, we become bored. While “Miles to Go” #1 includes a lot of questions and a lot of characters, at no point are we not invested. The characterization is that strong.

Molnar and Moore work in lockstep in “Miles to Go” #1, which is another reason why the story works so well. What we mean is that Molnar’s art complements Moore’s writing well. While there are no major artistic set pieces in “Miles to Go #1 (if you’re seeking explosions galore, seek elsewhere), Molnar’s ability to draw emotion on characters is pitch perfect. Nowhere is this more apparent than in Amara’s scenes at the hospital, visiting her old mentor. In a series of panels with little physical movement, Amara’s eyes portray a full range of emotions. At one moment she’s wistful, then perhaps ashamed, then joyful and relieved. Agent Carver’s scene in the hospital has more physical momentum, but Molnar choreographs his movements with great pacing, giving us some top notch grimaces to boot.

Molnar’s color palette, a mix of mostly subdued blues and reds with a splash of beige, works wonderfully. There’s a sense of domestic or suburban ease in “Miles to Go” #1, which makes the moments of disruption all the more delicious. Perhaps the best way to describe the art in “Miles to Go” #1 is that it’s like a breeze: it passes through the pages easily, with little resistance but with a noted presence. From top to bottom, “Miles to Go” #1 just flows.

“Miles to Go” #1 is another strong entry in the crime/thriller genre, with a sprinkling of slice of life thrown in for good measure. The characters are believable, nuanced, and after a scant twenty pages, it’s safe to say we care about them. This crime story is another win for AfterShock Comics.