The second of the Stieg Larsson Millennium mysteries, The Girl Who Played with Fire, gets its own comic book from Hard Case Crime and Titan Comics. For those not familiar with the follow up to the blockbuster The Girl with the Dragon Tattoo, our story picks up several months after those events. Mikael Blomkvist is a national hero and back at the perch of his beloved Millennium magazine, and Lisbeth is off . . . doing whatever it is Lisbeth does (mostly avenging those who have wronged her in very violent ways).

The magazine dives into a new investigative story around sex trafficking involving some very high profile Swedish personalities, famous people, some connected to Lisbeth, who desperately want this story not to see the light of day. When Lisbeth crosses paths with the murderer of the sources of this story, Blomkvist not only rediscovers his old friend/part time lover, but discovers she’s in very much over her head and in need of his help.

(Warning: this review will contain some spoilers.) 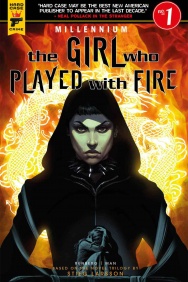 It’s mystery more twisty than putting together a Billy bookcase without the included Allen wrench. The latest graphic adaptation of the famous Millennium trilogy, like its previous counterpart, succeeds where the original prose works failed.

This is not the first time the Stieg Larsson books have been adapted for the comic medium; DC published them as graphic novels in 2014. This series from Hard Case Crime, however, is the first time they were presented in serialized form, and it works beautifully. Sylvain Runberg addresses one of my biggest faults with the original books — too much extraneous, unnecessary detail —  by stripping down the story to its bare elements. There isn’t a cup of coffee or sandwiches or Billy’s Pan Pizza or recount of Lisbeth’s IKEA trips in sight. (Side note to any of our Swedish readers:  Is Billy’s a real frozen pizza brand in your country?  If so, could you send me some?  It seems to be worshiped by Ms. Salander, so it has to be good.) Avoiding this over-detailing of scene — a victim of poor translation, poor editing, or both — brings the reader right into the story, and allowed me to find details that I missed when I first read the book because I was going through pages and pages of all the things Lisbeth bought for her new apartment.

The illustrations by Manuel Gonzalez also brings a new appreciation to its source material, highlighting character personality and depth not easily understood and appreciated in the original written word. Gonzalez draws his characters with emotion. Heavy line detail under Blomkvist’s eyes and just the right amount of scruff on his face show that the events of Dragon Tattoo, and his concern for the welfare of his investigative partner, have taken a toll on his psyche. The occasional smile shows he’s found some sense of relief and purpose in his new role as savior of Sweden, but even in those moments, the worry and stress is still all over his face. The arrogant smile of Nils Bjurman, Lisbeth’s guardian, underlines his severely broken moral compass, and shows he’s going to do whatever it takes to worm his way back into Ms. Salander’s life and make it a living hell.

As for Lisbeth, she’s the perfect touch of innocence within darkness – drawn as the textbook goth stereotype (short dark hair, piercings in any place visible, thin but not sickly so), but with a smile and sadness in her eyes that adds just that hint of warmth and compassion for those that she lets in to her world – Mikael, her lover Miriam, her first guardian Holger Palmgren. While all the books have been adapted for the screen in both English and Swedish, there’s no hint of any inspiration of those in these characters; they have a whole new look to them while remaining true to descriptions in the novels and the imaginations of many. (One may find a chuckle, however, at a fleeting reference to Daniel Craig, the Mikael Blomkvist of the 2011 film release.)

Gonzalez also uses his treatment of scene to underscore Larsson’s fiction. The Girl Who Played with Fire takes several dips into Lisbeth Salander’s past and family life, and Gonzalez treats those as the fleeting memories they are – inserted into the story at seemingly random times, never taking up more than a page or two, and always lacking some sort of context (like when you join a TV show halfway through).    They are presented as memories often present themselves in our lives – fleeting, never linear, with the occasional focus on a very insignificant detail: a Nirvana t-shirt, wide eyes of young Lisbeth as she confronts her father, a lighter.

Mr. Gonzalez’s skill extends past drawing to his coloring. There’s a tone of dark and shadows throughout this book, highly appropriate with this subject matter. Our characters live in the shadows, both literal and figurative, and whatever color is there is mostly dipped in pitch-black ink. When light does shine through, it’s vibrant and violent – think explosions, a flashlight, a piercing blue eye that has surfacial beauty but hints of the evildoing of its master. Those scenes that have a lighter touch seem rather surreal – they feel more like an attempt at normalcy in the face of unspeakable tragedy rather than the mundane aspects of life, and flatter colors with little depth underscore this feeling.

There are few times where violent scenes are colored in brighter tones (a scene with one of the alleged sexual abusers is confronted by a masked vigilante about his actions, implied to be Lisbeth herself), a clever symbol to show that no matter how much you hide, your sins will come to the light of justice. Phillipe Glowgowski takes lettering and layout to a new level with more smaller panels per page (perfect for those who read this on Comixology with guided reading) and word balloons that connect like double bubbles to allow for flow of conversation.

As I mentioned in previous reviews, comic adaptations for existing properties run the risk of pandering to fanservice, not leaving room for new fans to come on board. “The Girl Who Played With Fire” is told and drawn to allow for new fans to enjoy a thrilling crime story and for those who have read the novels to uncover new layers and interpretations. I enjoyed Hard Case’s “The Girl with the Dragon Tattoo” book, and I’m very much looking forward to their take on the the final chapter of the trilogy.

Final Verdict:  8.5 – Those not familiar with the original source material will find it a compelling, edge-of-your-seat mystery in words and art, and fans of the original Stieg Larsson book will uncover new meaning in his words and worlds.