The pieces are moving into place for the final act in the Swedish crime trilogy. The minimalist take on writing was appreciated in the first two comic arcs, but proves weakness here as subplots, some of which have deep connections to the main narrative, are carelessly tossed aside or left out.

(Warning: this review will contain some spoilers.) 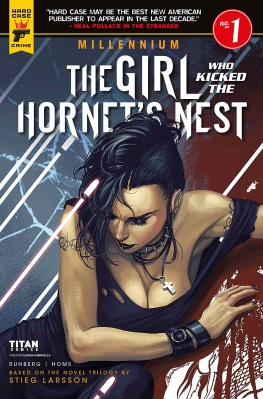 Lisbeth Salander is near death at the hands of her half-brother Ronald Niedermann. Their father Alexander Zalachenko is also recovering from injuries at Lisbeth’s hands. These actions prompt the “Section” a division of the Swedish secret police that has been responsible for Zalachenko’s safety, to take swift action to keep their interests safe. Mikael, convinced Lisbeth is innocent of all her suspected crimes, takes his research to local police and convinces them to keep their investigation of the other deaths where it is suspected Lisbeth played a role out of the media. All this is not enough to stop the Section and Niedermann from terrorizing others . . . or Lisbeth turning herself in to the authorities.

And now comes the final act, not with a bang (or as much of a bang as in the two previous books) but with a bit of a whimper. The concluding novel of the Millennium trilogy certainly doesn’t feature as much violent action in its narrative, though don’t let that dissuade you from reading. There’s more than a fair share of violence and bloodshed. Rather, it’s an feast of back room conversations and deals, more secret and Machiavellian in its plot twists to come to its codas. It does make a comic adaptation more of a challenge. How do you make a quality comic that captures interest when the plot features more talking than doing?

Whereas I sung the praises of Sylvain Runberg’s writing in “The Girl Who Played With Fire” for stripping the story down to its necessary elements, I fear he stripped things down too far with this book. The hospital scenes and introduction to “the Section” are very much true to Larsson’s novel, but the section of the source material called “Counterattack” (in which Blomkvist and Salander both devise plans to take down the Section) are missing: mention of Lisbeth’s hospital contact with the outside world and Millennium magazine’s misinformation campaign are left out. Instead, we get Lisbeth’s convalescence in a few opening pages, and a dramatic cliffhanger of her turning herself into the authorities. The Erika Berger subplot at the Svenska Morgon-Posten is only lightly touched upon here. There’s no mention of the paper’s boss and his unethical Asian business dealings, and the smear campaign against Erika is reduced to a set of sexy snapshots sent to the paper’s offices. How I wish this series could be extended to three issues instead of the expected two so that these narratives can be explored with the proper treatment they deserve.

Jose Homs is back on pencils, inks, and colors for this issue. I’m not really sure why he took this brief break: “The Girl Who Played With Fire” #2 is the only issue in these series where he was not featured on the creative team. Now, Manuel Carot Gonzalez did a fine job with the art in that issue. He captured the essence of all our characters perfectly, highlighting their emotional complexity in simple strokes.  There is much to be said for consistency though. It’s great to have the artist who’s seen this story from the beginning back for this final act, as there are subtle differences between the two styles. (Needless to say, I’m disappointed to see Gonzalez in the artist credits for “The Girl Who Kicked the Hornet’s Nest” #2. I’m more of a fan of Jose Homs’s work and feel he deserves to close out the story that he opened.)

Homs opts for smoother, more rounded facial expressions and larger eyes (you see this particularly with Erika and Blomkvist), and in the case of Erika, a more voluptuous chest. Gonzalez, conversely, features harsher edges, chiseled jawlines, and a lot more contouring. Homs does provide more of a lighter visual feast for the eyes, which is not only my personal preference, but a nice counter with this dialogue-heavy book. Homs does take some influence from his predecessor for some characters; Niedermann looks every bit the stocky giant that Gonzalez made him out to be. The one thing both artists do right? Making our dramatis personae their own. With a previous graphic novel, an English-language film of the The Girl with the Dragon Tattoo, and Swedish film treatment of all three books, it’s the easy way out to give Blomkvist a touch of Daniel Craig or Lisbeth the style of Noomi Rapace. Thankfully, neither artist does that here; these characters are their own visions and interpretations.

The light touch does extend to colors. Outside of a few key scenes of Lisbeth or the Section lurking in shadows, this entire issue seems to be under the harsh light of day, again, a 180 from Gonzalez, who bathed any and every panel in color dipped in plenty of black. It’s a touch ironic viewing scenes of Section meetings in softer pastel tones; one would expect a meeting of a very secret section of the Swedish secret police to be conducted in the shadows. A metaphor of what is to come for our antagonists? Perhaps. Homs also knows when to punch the color up to 11, and it’s the few moments of violence that this comic has: a car crash, a hospital shooting, a violent home invasion. It breaks up the more dialogue-heavy sections of the comic at just the right times.

The challenge for the second and final issue of this series (and the entire Millennium comic adaptation) has much ground to cover. It won’t be an easy task, but I have faith in our creative team to do it and do it well. No doubt in my mind the late Mr. Larsson, if he we alive today, would be a fan of this new spin on his iconic world.

Final Verdict:  6.0– We need more time and space to explore the interconnections of the third book, and the edits that were made to narrative were not the best choices. That said, having the original artist on this book does provide some redeeming value.