In Educated, Tara Westover writes, “My life was narrated for me by others. Their voices were forceful, emphatic, absolute. It had never occurred to me that my voice might be as strong as theirs.” As safe and comfortable as a family, a community, a hometown might be, there’s something in our human cravings that often tugs on us to look for another pack, another herd, especially one promising transcendence, even with dangers and uncertainty. It’s the discovery of another world, however much a departure, where a voice of our own can live.

“Mimi and the Wolves” spins the first three acts of a story, still to be completed, that mixes a cult narrative, mystical and mythological forest fantasy, and cartoon animals with very grown-up preoccupations. Mimi (who might be a mouse?) eschews her quaint and humdrum life with her partner Bobo (who might be a dog?), tending farm and making flower garlands. Instead, ineluctably, Mimi follows a beckoning from some strange dreams and is drawn into a mysterious and untamed life with a pair of woodland wolves, soon abandoning Bobo and encircled by their tempestuous, hookah-smoking, and oddly intoxicating lifestyle. More is afoot in this absorbing and puzzling story by Alabaster Pizzo, which is itself an entrancing web of unknowns like the new world Mimi wraps herself in. 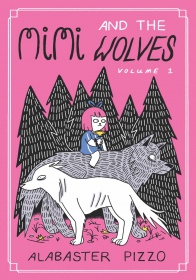 Written and Illustrated by Alabaster Pizzo

Mimi enjoys a quiet, productive life in her tree house in the Flat Fields with her companion Bobo, until a mysterious and disturbing recurring dream of demons and a long-haired deity becomes impossible to ignore. In the Evergreen Woods live dangerous creatures who can help her, but will she leave the comfort of her home to find answers? An epic tale of affairs, alliances, and friendships in a quest for power and self-discovery.

At risk of stealing from you what I got to enjoy, I can’t review Alabaster Pizzo’s “Mimi and the Wolves” without narrating the ways it surprised, befuddled, and ingratiated itself to me.

My previous encounter with Alabaster Pizzo’s work did not prepare me for “Mimi and the Wolves.” Pizzo was the artist for “Hellbound Lifestyle,” a Retrofit book of 2016 with writer Kayleigh Forsyth, a comic whose wry wit and colorful verve dialed up the many contradictions of our contemporary “smart”phone lifestyles. Pizzo’s cartooning in “Hellbound Lifestyle” popped with sardonic fun.

In “Mimi and the Wolves,” Pizzo weaves something altogether different. Pizzo’s black-and-white cartooning for “Mimi” is less like the Lisa Hanawalt or “Perry Bible Fellowship” vibe of “Hellbound Lifestyle,” and much more like the sink-deep-in-your-brain unsettledness of a Sophie Goldstein, Tillie Walden, or Emily Carroll graphic novel, both visually and narratively. Maybe Isabel Greenberg is a good comparison in visuals, if not as much in vibe. But Pizzo style is unique in its quirks, its potency of simplicity, particularly for this story that’s finely graced with mystic icons, with the surreal invading the cartoonized real, with characters whose subtle shifts of animal eyes belie wonderful ambiguity, mischief, and cryptic uncertainty. 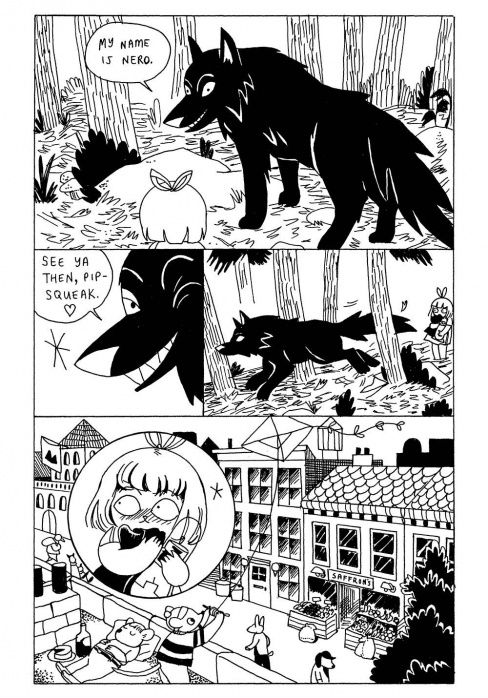 from Mimi and the Wolves by Alabaster Pizzo (Avery Hill)

The title and opening pages— a map of “Hilly City and Region,” a decorative set of dramatis personae pages, an opening of hooded and magical ghostlies— had me gearing up for an epic fantasy yarn, though not in the tune of a Barry Windsor-Smith or Hal Foster, but instead in the way that the aesthetic aperture for fantasy comics is now cracked wide open by Jeff Smith’s “Bone” and a hundred great fantasy webcomics.

That does in fact prove to be part of the story in “Mimi.” Lingering in the background, still to be paid off, are a pair of spirits taking orders from Severine, the aforementioned hooded figure. Also looming throughout the story is Venus, goddess, entering dreams and dipping hands consequentially into these little earthly lives towards unknown purposes.

What really sits at the center, the story’s first hard turn, is a bond Mimi forms with a pair of wolves she meets when she acts on Venus’s appearances in her dreams and starts hanging a Venus cult symbol around the trees, pulling her into the orbit of Ergot and Ivy, two wolves who embrace, initiate, and groom Mimi for a deep, inner forest world of rites, sprites, and, well, drug-induced delights.  Here’s where Mimi finds her way into the wolves’ cult, and like many of the most effecting cult narratives, both the fascination and the fear, two sides of the same coin, come through to readers.

Mimi’s immersion in the wolves’ world is not immediate and total— a night here, two nights there— which keeps Mimi’s employer/friend/watchful guardian Ceres (maybe a cat?) and other members of the anthropomorphic town, such as newcomer Kiki (maybe a panda?) in the picture. How these characters fold into the central drama remains to be seen, especially Kiki’s backstory that is hinted as a sub-plot. But in these opening acts, these characters at least provide some tonal relief and touchstones of normalcy as Mimi’s road descends increasingly into the weird of the wolves.

I won’t spoil what that descent involves, though it’s those details that set up the direction of the rest of the story to come. But I will reveal perhaps the other surprising twist for me: discovering, after reading and starting to write about “Mimi and the Wolves,” the extent to which the work came out of Pizzo’s own life experiences— figuratively, of course.  She has not to my knowledge lived with mystical wolves. But in an interview with the Beat, she calls it “loosely autobiographical,” and indeed there’s something to the raw identification in “Mimi and the Wolves” with setting out from a life familiar and into lands, relationships, and spiritualist wanderings, that feels like it comes from intimately held knowledge. It’s fantasy as diary.

Going there with a creator’s work, I’m both fascinated and hesitant. I’m left wondering whether I myself as a reader run some risks diving headlong or investing emotionally, if I have to hold back some of my fascination lest I wind up sucked in like Mimi. On the other hand, we suspend such anxieties and surrender to the hands of Disney or a Peter Jackson or someone like that all the time. Pizzo’s work, long in creation, earns that fascination. I hope to see it reach a completion, wherever Mimi’s story lands us.