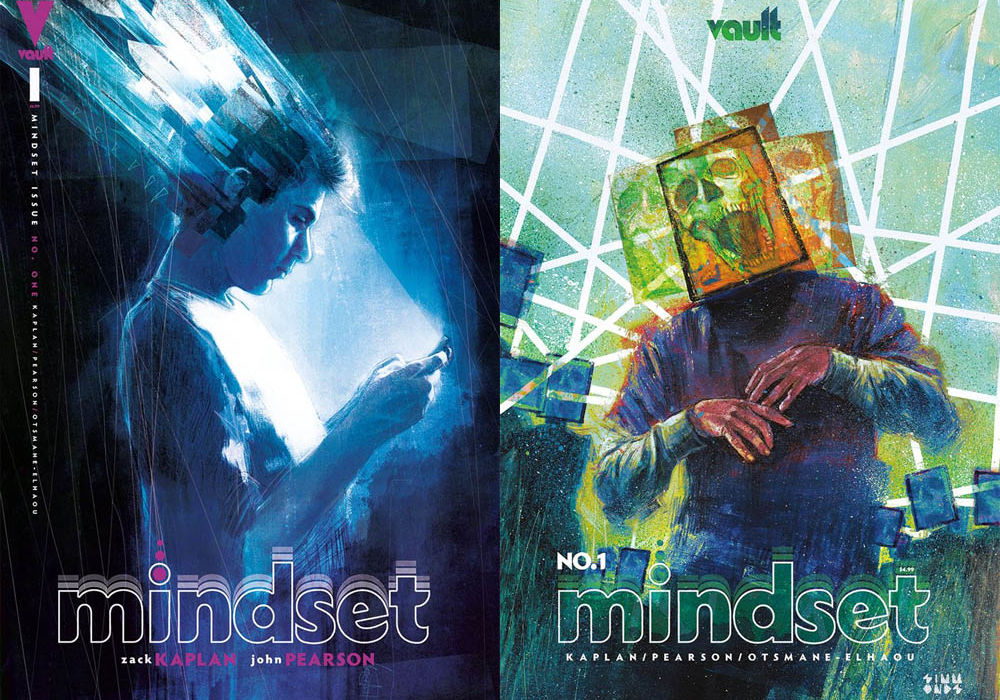 There are two things in this world that I love to read and talk about: comic books and history. I bring this up because one of the things I love about history is watching and analyzing how the world changes after some massive cultural shift happens. We’ve seen it during the Fall of Rome, the Age of Exploration, the Industrial Revolution, and the end of the Second World War. They aren’t necessarily good changes, but they happened and left the world radically different than what came before.

I bring this up because we are smack dab in the middle of a new paradigm shift with the Internet and Tech revolution, and wouldn’t you know it, here comes a comic from Vault titled “Mindset” to talk about it. 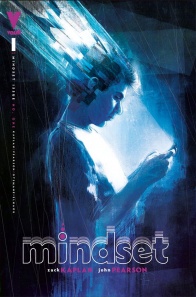 When an introverted tech geek accidentally discovers mind control, he and his friends do something unexpected – they put the science into an app to help users break their technology addiction. But as their Mindset app achieves a dangerous cult following, lies, conspiracies, and murder come to light. Are they helping people or controlling them?

On the surface Ben Sharp is a kid who has everything: a loving family, solid grades, a bright future, and the kind of programming and tech skills that could easily land him a high paying job and at any company he wants. But the sad reality is that most of it is a sham. His parents are only together for appearances, his grades don’t really matter, he is an idealist trapped in a world of profit hounds, and he is a man with no influence trapped in a world where influence is everything. However, Ben Sharp believes he’s onto something big. He thinks that he can use the tools of the tech industry to develop something as crazy as mind control, and what do you know? He cracks it.

Now all he has to do is navigate the shark infested waters of Silicon Valley before it swallows him whole.

“Mindset” #1 is written by long time comic book scribe Zack Kaplan, and there are three very important things that he does very well. The first thing is that–on a broad macro level–Kaplan offers a great look at the mindset and culture of Silicon Valley and what’s really going on behind all the parties and flashy apps. This is a world inhabited by people who know the power of influence and control and are willing to pay through the nose to get it. The second thing is that Kaplan knows his main character and writes him very well. Ben may be a head in the clouds idealist, but his reasoning and desire for a better world is well explained and makes him incredibly sympathetic. Finally, the science behind Ben’s discovery is just futuristic enough to spark the reader’s imagination, but just realistic enough for the reader to believe that this could happen without losing their immersion. This is a book with a relevant message and a very believable protagonist, and it excels at making the reader want to learn what happens next.

While Kaplan has done a very good job in creating an interesting story with great characters and a great message, there are a few hiccups with the plotting of “Mindset” #1. Specifically, near the middle of the book Ben hops from one location to another without any real sense of time or speed. Granted, there is plenty of urgency and reason for everyone to be where they need to be, and time is a very difficult thing to convey in any visual medium, but it’s a noticeable hiccup in an otherwise solid book and could be distracting. Also, the book introduces a potential conflict over a love interest between two of the main characters but doesn’t do anything to set it up in the first issue, so if you want to learn how the characters get to it you’re going to have to keep reading.

The artwork for “Mindset” #1 is provided by John Pearson, and it’s an interesting choice. While Pearson draws his characters in a lifelike and realistic manner, his choice of backgrounds and coloring gives the book a very abstract and dreamlike feel. It bears a striking resemblance to the work of other creatives like David Mack, which can make the art difficult to follow if you aren’t paying attention. There are some great moments where Pearson’s art enhances the theme of the story. Since a lot of the background details and crowds of people are hazy and difficult to see, it really plays into the social isolation and distancing of the main characters. On the other hand, there are some pages where Pearson opts to use a free form approach with the layouts which can make the book hard to follow and enhance the problems with the book’s timing and sense of place. It’s an acquired taste, and the style of art might not necessarily be the first choice when you think of a gritty, realistic, tech thriller, but it does an admirable job of telling the story and enhances the themes and message of the book well.

“Mindset” #1 is a book with a lot of things to say and it says them in a believable and well thought out way. It’s a book that takes a long, hard look at our current tech revolution and adds just enough science fiction to it to make it futuristic while still being believable. The creative team has introduced its readers to a fascinating mystery, and it will leave you wanting to read more.

Final Verdict: 8.2- The artwork is an acquired taste, but it does it’s job well and it enhances a comic with a relevant and interesting message and believable characters.