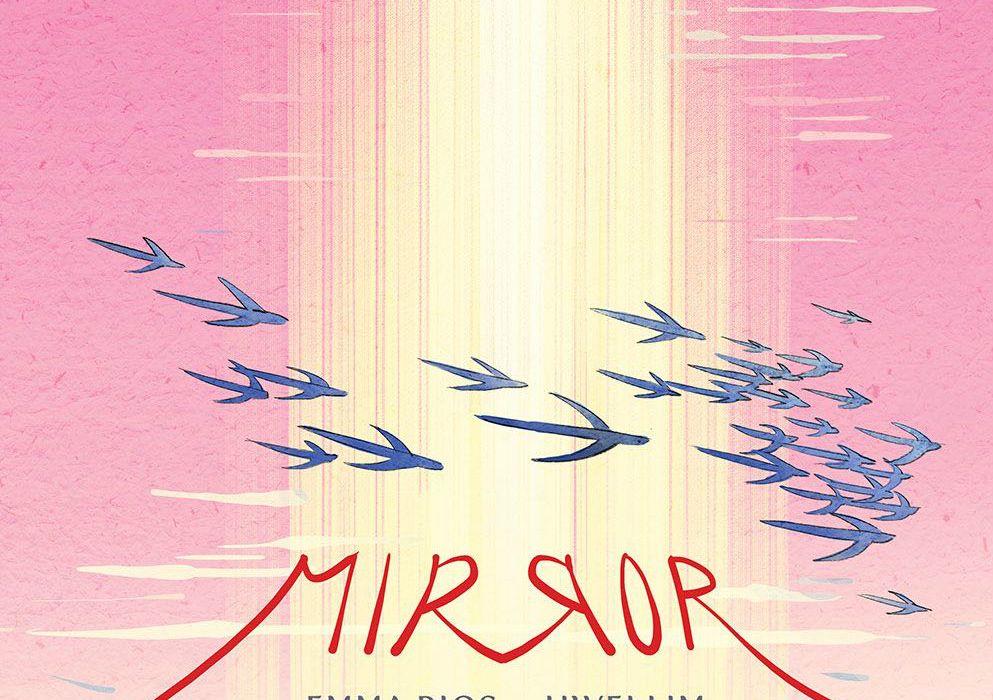 Emma Rios and Hwei Lim’s “Mirror” series has been one of incredible intrigue to me. On one hand, there’s so much to it, that every page feels well crafted and brimming with imagination. But you really have to work hard for it, and the release schedule makes it hard to read in singles. Let’s see how this issue fares as a story continuation. 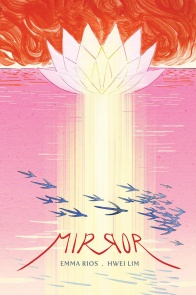 Written, illustrated and lettered by Emma Rios and Hwei Lim

Rejected by the paradise they sought to create, the survivors of the Irzah colony return to the Synchronia, a place they no longer can call home. For them and the sentient animals they have created, “home” is now a question the former admiral, Elena Hagia, takes it upon herself to answer.

I was worried going into this, I’d struggle to remember the premise, given that the last issue of Mirror came out in April, and wasn’t directly related to the story that this issue deals with. Luckily for me, Rios and Lim carved out such distinctive characters, like Zun, from their series that as soon as I saw them reappear on the page, plot and character details weren’t far behind. For newcomers, however, Rios and Lim deliver a story here that continues from threads in the previous stories in of Synchronia but works as a new story in this setting. Character relationships are introduced and goals are established with the evacuation of Synchonia on the Esagalia ship, and although a lot of fantasy language is used, it’s easy to follow along.

I have a small problem with the content of this issue, in that a lot of it seems to be lacking plot drive, sampling focusing on re-establishing status quo. Rios and Lim circle around this by delivering lots of different character plotlines – although they all work as introductory stories, they work well because of each’s interesting and compelling setting. My favourites occur with Kazbek and Besarion sharing a drink around the middle of the book, which is a really touching moment, and right at the end which redirects us to what are essentially gods of the “Mirror” universe. With the latter in particular, find it interesting how their dialogue tends to be more straightforward and simplistic – saying things like ‘HELLO THERE’ and ‘UNKNOWN BUT FAMILIAR’ makes sense if they are truly divine beings, they don’t feel the need to flourish language.

Rios and Lim give this issue a lot of nice subtexts, too, on top of the deep mythology. The xenophobia against the animal beings continues here, with the crew onboard the Esagalia cargo deck. We get analogues to police stereotyping as guards question a lion-faced being simply for yawning – snappy dialogue like ‘I haven’t done a thing! Stop accusing me of making trouble!’ hits close to home, and feels relevant in modern context. I also find fascinating the idea of Besarion and the rests of the crew trying to work politically in the shadow of Kazbek’s death. It creates a lot of tension as each character tries to push their agenda, but with respect to Kazbek’s own ideals too.

Art-wise, I feel like the book speaks for itself. But here I go, trying to explain it all with words anyway. With issue #8, “Mirror” continues to be one of the most beautiful books on the stands. The world of Synchronia is so unique and fleshed out, and we get a lot of different parts of it in this issue. The opening scene is one of natural, warm beauty, with the Esagalia arriving on an orange-purple gradient horizon. The use of simple shapes to create the design of the morphing effect of the ship is very naturally rendered, and moves sleekly from shape to shape. There’s a lot of other nice touches throughout the issue – the Kazbek/Besarion flashback has a striking scene of a glistening red sea with spiked pyres of the Esagalion resting above it, and creatures flying above it. It’s a very serene scene that embodies what Rios and Lim do with this series – something that looks deceptively clean and simple, but with layers of context underneath.

The character work here is cleverly done with simple lines, a credit to the style of art that Rios and Lim use. The most dynamic character throughout this issue is Zun, who as a child naturally has different, exaggerated reactions to all sorts of situations. I love in his introduction in the issue, he seems to be so confused talking to the Owl who doesn’t feel the need to have a name. Rios and Lim don’t crease his face with heavy expression lines, but display emotion more through a combination of facial expression and bodily position. In these panels, Rios and Lim have Zun sitting with slanted eyebrows and a concerned expression, complimented by uneven shoulders and arms sitting uncomfortably together. The end product is one that displays to the reader really effectively how Zun is reacting to this situation better than an over-detailed face or any internal monologue can.

Rios and Lim deliver some really striking watercolors throughout the issue, using the effectively to set mood for a scene and just to make the book overall look stunning. I’m a big fan of colors being used subtly to emphasise a mood or tone within a scene, and I’ve found several examples that work well. In the introduction to Zun (which seems to just work well universally, in retrospect), we’re shown Zun daydreaming of being stranded in the ocean with a large wave threatening him. The scene starts with warmish, dusk hues that turn quickly to ominously cold blues once the large wave looms over Zun. Later in the book, in the setting of the Azogue Base tower, the palette is largely split between orange and blue. The orange exemplifies the industrial nature of the tower well, contrasted against the clean blue of the sky. Funnily enough, the orange also engulfs the sea, instead of the typical blue – a choice which gives the ocean a very alien, uncaring feel. When we see a panel of the ocean with ghostly lifeforms swimming underneath it, it makes the palette decision work even better.

There are comic books that are all about style and surface appeal, and then there’s “Mirror”, which is substantial, beautiful and rewards multiple reads. Issue 8 reunites longtime readers with older characters, a decision which doesn’t move the plot leaps and bounds but gives newer readers new conflicts and ideas to feast on. And then there’s the art, which makes my heart swells up every time I think about it. This is a beautiful book, you guys.

Final Verdict: 8.5 – “Mirror” #8 is entrenched in its well-crafted world – presenting a new story that feels like a natural progression from everything Rios and Lim have given us so far in this visual treat of a book.