Tom King and Mitch Gerads put the New Genesis/Apokolips war on hold to delve into a far more grounded conflict, one bereft of any actual combat whatsoever. 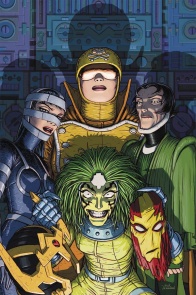 Mister Miracle and Big Barda are in a panic. The war with Apokolips isn’t going well. And it’s Barda’s turn to have her past come crashing back into her present as the Female Furies appear on the scene with blood on their minds. Continuing the acclaimed miniseries that Entertainment Weekly called “by far the best comic on the stands right now.”

Depending on the issue and the situation, reading Tom King and Mitch Gerad’s “Mister Miracle” can be an extreme roller coaster of emotions. From horror to happiness to anything in between, this writer/artist team definitely makes the book and “Mister Miracle” #7 is no exception.

As is somewhat customary of the run, there is little follow-up from the immediate ending of the prior issue, where Scott had fallen into “the Apokolips trap.” Instead, it seems Tom King skips ahead however many months it takes for Big Barda and Scott Free’s latest fateful day to arrive, resulting in a far more human conflict for these two literal New Gods: delivery of a baby.

Given the comic’s focus on the relationship between Big Barda and Mister Miracle, the most grounded of the New Gods due to their ties to humanity and extended time on Earth, King is able to juggle the dual natures of humanity and godhood very well, enabling readers to see themselves in the adult situations the characters encounter far more than most superhero comics. Scares involving natal delivery are prominent, and much fun is had at the expense of the over-the-top names of many of the New Gods when trying to decide on one. By using such a mature relationship, one so calm and grounded while at the same time larger-than-life, King helps readers to enter the delivery room with the couple in a way that some other writers may have been incapable.

The situations presented, much like many of the more mundane events in this comic run, are absolutely absurd. King doesn’t even make the slightest attempt at an alias for these characters, with Scott outright signing in his wife as “Big Barda” in the hospital, and their visitors arriving in full uniform. It’s a testament to the King’s writing ability that the superhuman physiologies of the New Gods can still surprise the medical practitioners in the delivery room in spite of all that happens. After all, it’s the DC Universe; they’ve probably seen pretty weird things come through on a fairly regular basis, but nothing this tough.

New God-centric situations are filled with bathos, especially where the Female Furies are involved. The fact that Scott continues to deal with the overly dramatic New Gods in such a deadpan manner, completely ignoring their grandiose posturing so very often, makes even the most horrific events in the issue come with a hefty dose of comedy. These beings, these literal gods of evil, are so mundane to him King treats them like “the annoying relative who came over today” instead of the truly existential threats that they are. The fact that the actual Female Furies are in the waiting room therefore acts as a major source of comedy, since all of them, especially Mad Harriet, are more of a threat to one another than to either Barda or Scott. Also fitting with the comedic anticlimax is the use of the customary Jack Kirby-esque narration to close the issue, so dramatic that it ends up being one of the funniest examples yet.

Of course, there are some problems. The fact of how the story jumps from one type of story to another depending on the issue results in us not having much in the way of clarity regarding what exactly happened last issue. That said, the implications of Scott’s mental instability across the entire series seems to indicate that we may want one kind of story, but his mental state and the fact that he is the apparent perspective that we use indicates another direction, one far less cosmic in scale (on the surface, anyway). And, after all, we can’t forget something that keeps us from delving too deeply into the dark: Darkseid is.

Mitch Gerads’s artistry is not to be overlooked by any stretch. His use of the three-by-three paneling, coupled with the “Kirby dot” impressionist coloring that encompasses everything in the issues, makes the entire issue feel, much like all of his others, as though it were one of Jack Kirby and Vince Colletta’s original collaborations, seemingly perfectly emulating the selfsame style.

Despite the relatively old style overall, Gerads works in newer developments in comic artistry nonetheless. His use of lighting is very modern and realistic, such as the car ride over to the hospital. The shadows, though filled with Kirby dots, nonetheless have a very realistic, non-cartoonish tone to them. The three-by-three panels work as a restriction and a way to show where something just does not belong, such as the aforementioned use of the Female Furies. Whereas Scott and Barda are comfortable to remain within their boundaries, the Apokolips-affiliated Furies, especially those in conflict with one another, break those boundaries, fighting from one panel to another in such a way that they demonstrate how distinctly they do not belong in the relative slice-of-life atmosphere of Scott and Barda’s story.

With all of the ups and downs of the story of this run on “Mister Miracle,” it’s nice to have a breather… and this breather is just as amazing as the rest of the series.

Final Verdict: 9.0– A fantastic continuation of the King/Gerads run that shows a story does not have to be cosmic in scope to be both mundane and divine.