With her role in Agents of S.H.I.E.L.D. and coming off the heels of her highly acclaimed S.H.I.E.L.D. 50th Anniversary Special, Agent Morse is the star of her very own ongoing. How does its debut hold up? 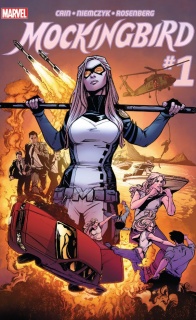 BECAUSE YOU DEMANDED IT! Now in her own ongoing series!
Bobbi Morse is Mockingbird, S.H.I.E.L.D.’s most versatile, most in-demand agent!
But a string of missions gone wrong indicate that something strange is lurking within S.H.I.E.L.D.’s own medical and recovery network. How far will Mockingbird have to go in order to solve this puzzle box and get to the truth? Bestselling author Chelsea Cain teams with newcomer Kate Niemczyk.

“You might have some questions. Because what the heck?” That is what writer Chelsea Cain states in her letter to the fans in the back of the issue, and I’m inclined to agree. Because if there is a word I kept coming back to when thinking about this issue it’s “frustrating.” Now to beg the question: Is it Good Frustrating or Bad Frustrating? As to that, the answer is… kinda both?

The “Good Frustrating” aspect is that the issue doesn’t hold the hand of the reader and throws enough crumbs of plot points and concepts to keep you intrigued with its medical mysteries, psychological thrills and corgis (it makes sense in book, shut up.) This intentional act of leaving the reader a bit disoriented reminded me of the beginning of the video game Dark Souls. In particular, when you first get to Lordran with the vague objective of “ring the Bell of Awakening,” and then you have to figure the pieces out from there. It is a big act of trust to the reader to see if they’re willing to commit to the long run.

The “Bad Frustrating” bit was that I don’t feel like I got a good enough grip on Mockingbird herself in this issue. Like with Connor Hawke, I don’t know a whole lot about her, and the only real time I read her was when she was in Nick Spencer and Luke Ross’ “Secret Avengers.” And I get that she’s a S.H.I.E.L.D. Agent, a biochemist expert. I got those parts, and the issue does a good job weaving that scientist background in, but I feel like I didn’t get a great feel for something deeper. The little tidbits we get are enough to produce interest but -as I’ll talk about later- it’s so heavily dependent on issues to come.

I really do love how Niemczyk and colorist Rachelle Rosenberg depict Bobbi. She actually looks like someone who would do this kind of Secret Agent-ing stuff. She is never depicted as some blow-up doll and actually has muscle on her. The bits of action we see here flow well, although I do have to say that some of the facial expressions come off as a bit muted. The dog seems to emote more than some of the human character at times.

One last plus on art: Joelle Jones’ cover is positively on fire. Top tier awesomeness.

If it seems like I’m having trouble coming up with things to say about this issue it’s because I kind of am. This issue makes a really good argument about the futility of reviewing single issues of a story that are so clearly written for trade collections. Going back to that letter in the back, Cain runs down the arc; issues #2-4 will depict events alluded to in issue #1, then #5 will follow up on how this issue ends. With that said, it makes it really hard to judge this issue on its own because if I did that, i’d say it’s a confusing mess. But it’s not so much of a confusing mess to be completely alienating. I feel like I really went after this issue, but I do want to know what happens!

Final Verdict: 6.0- As it is, while it has some good moments, the full potential of this issue won’t be felt for some time.